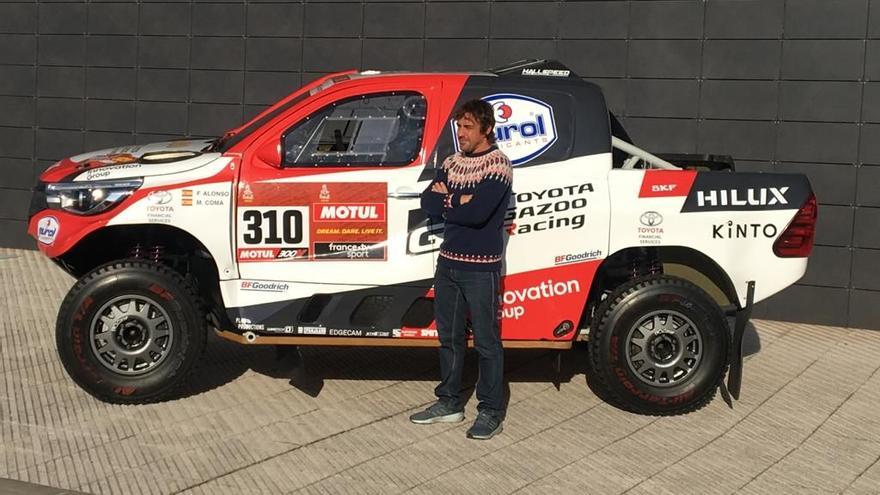 Almost recently arrived from Enstone (England) –he landed at the Asturias airport in the late afternoon of last Tuesday–, Fernando Alonso approached the museum facilities and the circuit that bear his name and which are located in Llanera yesterday morning. . He appeared smiling and relaxed and the first thing he did was to greet the Toyota Spain managers who came to Asturias to deliver the car with which the Asturian driver had raced in the last Dakar.

It is the Hilux Dakar V8 of 325 hp that the Japanese brand through the Spanish subsidiary delivered for its exhibition in the museum. There he will share the stage with the rest of the Asturian driver's cars, from the initial karts and single-seaters of the Open Nissan and F3000, to the McLaren and Ferrari, through the Renault with which he won his two Formula 1 world championships and the Endurance racing cars including the Toyota of Le Mans, the No. 8 TS050 Hybrid (LMP1) with which he won the World Endurance Championship (WEC).

Relaxed, and after greeting those present, among whom was José Luis, his father, he quickly went into action and acknowledged that he “wanted the car to arrive” at his museum. And it is that Alonso was clear: “The Dakar left a very good taste in my mouth and I want to repeat. My challenge is to win this tough raid and that for me in the debut in January was a wonderful experience ”. "It is a race that can be attended at any age, there is the example of Carlos Sainz," added the pilot, as he explained on Tuesday in the exclusive interview published by LA NUEVA ESPAÑA, a newspaper that belongs to this group. , Iberian Press.

Alonso also referred to the hybrid cars that will compete this coming year in the Dakar and acknowledged that "their arrival is inevitable, you just have to see that the entire Toyota range is hybrid."

"Last year around this time I was preparing for the Dakar, and now I have a break that I really appreciate for the intense end of the 2021 season we had in Formula 1," he acknowledged. Alonso will return to work on January 4. "By that date I already have a simulator in Enstone," he discovered.

His return to Formula 1 was lived with enthusiasm: "I enjoyed my return to the cars of the highest specialty."

Accompanied by the directors of Toyota Spain Rebeca Guillén, director of communication, and José Manuel Méndez, director of product and customer service, and by Daniel Orejas, owner of Toyota Asturias, and Samuel Darrosa, manager of the dealership, took a tour of the museum where the cars that he has used throughout his career are exhibited.

Alonso explained in great detail the characteristics of the cars, the successes achieved with each one and showed helmets used throughout his sporting life, the hans, the fireproof suits and other small elements used in racing.

Finally he declared that “while Formula 1 is the heart of the museum and of my career, both the Le Mans and Daytona prototypes and this one from the Dakar are the ones that add a bit of sauce for people who can come and see a bit of all of them. the disciplines of motorsport that have been part of my history in recent years ”.