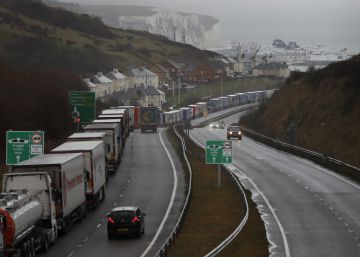 Christmas brought with it the long-awaited post-Brexit trade deal. After four years of negotiations and with seven days to go until the deadline expired, the European Union and the United Kingdom reached a pact on Thursday in which nobody wins much, but which does prevent a chaotic and damaging solution for both parties. The text will enter into force provisionally on January 1, as there is no time for the European Parliament to ratify it. With it, the British economy will lose its privileged access to European markets, and the City’s position in Europe is in limbo.

A lesser evil in a process that, without an agreement, would have been catastrophic for a country that sends half of its exports to the EU. The Union loses a powerful member of the club, but it has managed to stay much more united than in previous crises and to warn sailors about the effect of these adventures. The agreement clears many uncertainties and, above all, guarantees zero tariffs. But it also leaves open a large number of issues that will be resolved in the coming months in new negotiations.

With the pact, the European Union reserves the possibility of retaliating against the United Kingdom in the event that this country takes advantage of its legislative autonomy to generate situations of unfair competition that place community companies at a disadvantage compared to British ones, according to the document . It also provides for compensation or rebalancing measures, including the suspension of parts of the agreement or the imposition of tariffs, which can be adopted in just 20 days. It is a very strict mechanism that is available to both parties, but the British delegation has resisted tooth and nail.

Brussels and London have not agreed on how the provision of financial services will be regulated. Until January 1, the entities of the City will be able to operate freely throughout the community under the so-called “financial passport”, which automatically recognizes throughout the EU the permits granted by the supervisors of one of the member states. As of Friday, the jewel of the British economy will only be able to provide services in the EU through the equivalence system, the same as that applied to third countries: the Union will accept the permits granted by London if they consider that their laws have the same same spirit and achieve the same result as the own regulations.

Boris Johnson already admitted yesterday that the agreement falls far short of his ambitions in this regard: Negotiations have yet to begin to be defined and Brussels defends that it still does not have information to make any kind of decision. The sector, in any case, is out of eventual commercial retaliation, a pyrrhic victory for London. In terms of financial supervision, both parties have made a joint statement according to which they hope to seal a Memorandum of Understanding before March.

Both sides have avoided chaos: tariffs will not be applied to the export of products from next January. Therefore, UK exporting companies will have access to the EU market, while EU companies will be able to continue trading with the UK under the same conditions as they currently did. However, these operations will not be exempt from obstacles, since they will no longer be considered intra-community. Thus, British exporters will be obliged to certify the origin of their products and the percentage of these that comes from third countries, and British certifications are no longer recognized by the EU. On the other hand, both blocs have pledged to ease the bureaucratic burden on customs.

Exports of agricultural products will benefit from the exemption of fees, which could have reached 40% on some products, according to the EU, but the lack of an equivalence agreement on phytosanitary standards is sand in the commercial gears. Thus, agri-food exports will have to undergo border controls. For Spain, the United Kingdom is the third destination, after Germany and France, for its fruit and vegetable exports; 1,950 million in 2020, according to data from the Spanish Federation of Associations of Producers Exporters of Fruits, Vegetables, Flowers and Live Plants (Fepex). From the United Kingdom, both the distribution sector, which feared bottlenecks and shortages, and the agricultural sector, which will have access to the European market, have breathed relief, but foresee more complications and costs, especially in perishables.

The fishing industry has been one of the most conflictive points in the negotiations and, in fact, a final agreement has not yet been reached. The United Kingdom regains sovereignty over its waters, although a transitional period of five and a half years is established (until June 30, 2026). London obtains an increase in its fishing quotas which, at the end of the adjustment period in 2026, reaches 25% of the average value of catches made by EU countries in British waters.

The European Fisheries Alliance (EUFA) estimates that 42% of European catches came from British waters. As compensation, the sector will benefit from the proposal of the European Commission endowed with 5,000 million euros for sectors affected by Brexit.

Diesel or gasoline cars will have to be manufactured with at least 50% local parts to avoid being assessed with tariffs, while electric or hybrid vehicles may be assembled with up to 60% of parts from third countries, although the figure is it will reduce to 55% from 2026. (70% and 50% for batteries). Every year, the EU and the UK trade in almost three million motor vehicles worth 54 billion euros, while the flow of components and parts represents almost 14 billion euros annually, according to data from ACEA.

The extraordinary controls that will be carried out on food will also affect the pharmaceutical industry. Although the agreement includes “mutual recognition” clauses that would avoid additional inspections of production plants, batches originating from British territory will have to undergo quality and safety tests once they arrive in the EU.

The pact allows the mobility of European and British citizens for short visits, a maximum of 90 consecutive days, with a limit of 180 days a year, without the need to carry a visa. However, neither party has undertaken to guarantee long-term visas. The agreement “does not cover the right of EU citizens to enter (with or without a visa), work, reside or remain in the United Kingdom”, nor vice versa.

The pact establishes that there will no longer be an automatic mutual recognition of professional qualifications. Thus, doctors, nurses, dentists, pharmacists, veterinarians, engineers or architects must have their degrees recognized in each state in which they wish to practice. However, the door is open to eliminating these procedures in the future.

The agreement does not cover data traffic across the border between blocks, but opens a transition period of six months during which the regulations envisaged for data leaving to third countries will not apply. Brussels must decide within this deadline whether to accept the UK data protection mechanism, which would avoid the need for a specific agreement.

The UK loses access to the European energy market, and vice versa. Both parties refer to 2022 to agree on the electrical interconnection, key for the islands, which import 8% of their energy, according to Bloomberg. In chemistry, a key industry for London, the agreement does not include recognition of registration for the 22,000 different substances whose use the European Union admits.

The agreement does not apply to Gibraltar nor does it have any effect on its territory, which does not exclude that in the future a separate agreement will be concluded between the EU and the UK, the British colony in southern Spain. In fact, the British Government has announced that “it will continue its discussions with Spain.”

Banco Santander completes the removal of Aboukhair as CEO in Spain