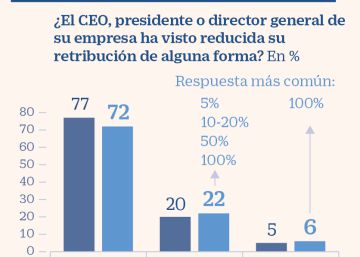 Since the state of alarm was declared, companies have had to adopt a series of measures to try to maintain employment. One of the formulas adopted, covered by the exceptional labor measures derived from the pandemic, has been the ERTE. However, most companies have not resorted to this option, and instead have implemented other policies to contain the costs derived from the slowdown in economic activity. 28% of companies, 60% with less than 1,000 employees, analyzed every two weeks since the health crisis erupted by the consulting firm PeopleMatters, admits they have done an ERTE. “But we see that this percentage continues to increase compared to previous surveys. Before they were made by force majeure, but now they are used for technical, economic and production reasons, but it should be noted that there is a large percentage of companies that try to maintain employment without taking exceptional measures ”, explains Victoria Gismera, director of PeopleMatters, who believes that if the economic paralysis is prolonged, the number of ERTE will continue to increase.

The report aims to analyze the impact of covid-19 on compensation packages and labor practices. 126 organizations participated in the last installment, most of them listed and with more than 500 employees. Most companies have created an ERTE monitoring commission, and 49% of those that are applying the temporary employment regulation file for economic, technical or production reasons have agreed to an end date, although, according to the study , it is expanding significantly, and only 12% of the companies analyzed have not agreed in collective bargaining on a date as the final touch. 49% of organizations, most with less than 3,000 employees, do not supplement the wages of their workers. 51% of the companies that do make a contribution do so on unemployment benefit, 67% of them, and the rest on the fixed salary. The additional measures to complete the remuneration grow as the weeks go by, and despite the fact that 46% of companies do not have any type of supplement established, 37% compensate with vacations and the same percentage with extra payments. 9% offer advances to workers.

Among the formulas applied to maintain activity and contain the costs derived from the coronavirus crisis, 99% of those companies that have been able to apply it have opted for teleworking. “Few have resisted this work system in order to maintain activity, and those who did not at first were because they had no resources or technology”Gismera explains.

35% have decided to give their employees vacations, 24% have designed an hour bag, 23% have made an unequal distribution of hours, 10% have applied a reduction in hours, and to the same extent granted unpaid leave and a benefits freeze has been made. The annual variable remuneration has also been postponed, in addition to making a reduction in wages for the entire group of employees or a part. Regarding the remuneration of the company’s chief executive, 72% of companies have not seen the need to reduce their compensation. 22% did reduce the fixed salary by between 5 and 20%, and 6% touched the variable. Despite these cuts, “now you have to be creative to maintain employee commitment and a vision for the future,” says Gismera.