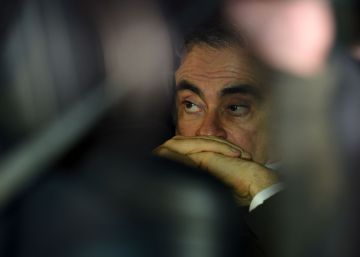 As the days go by, more details about the flight of Carlos Ghosn. The former Nissan Renault president, on probation on charges of corruption, managed to circumvent the enormous security measures around him and escape from japan last week. Upon his arrival in Lebanon, his place of origin and country that lacks extradition law for its citizens, the businessman proclaimed to have been “victim of a rigged judicial system.” Until now it was only known that he had flown in a private plane from Osaka to Istanbul and from there to Beirut. The investigations of the prosecution and the Tokyo police, to which Japanese media have had access, allow to begin to join the pieces of this evasion, worthy of movie.

The reconstruction of the events begins at the residence of Carlos Ghosn in Tokyo, on the afternoon of December 29. As reported NHK Y Nikkei, the security cameras installed by judicial mandate abroad show the businessman leaving the house on his own foot, something surprising given the permanent monitoring of the place. Ghosn walked 800 meters to a nearby hotel, where two people were waiting for him.

The three together then headed to Shinagawa station. Shortly after 4:30 p.m. they embarked on a high-speed train –known as Shinkansen– bound for Osaka, the third city in the country, about 500 kilometers to the west, a distance that the convoy travels in just over 3 hours. It is unknown if Ghosn, one of the best-known faces in Japan, resorted to some disguise to go unnoticed.

Once in Osaka, the three men accessed a hotel around the Kansai International Airport at 8 pm. Two hours later, the two companions left the accommodation carrying two large boxes. From Ghosn, no sign. As reported on Sunday on Wall Street Journal citing an anonymous source, the escape would have hidden within one of them. The two bunkers, too bulky for the airport scanner, would have been billed directly on a private plane bound for Istanbul.

An information of New York Times reveals that in recent months a team of operatives used hundreds of thousands of dollars to study airports and other points of entry to countries such as South Korea, Taiwan, the Philippines to Indonesia, in search of failures that would allow Ghosn to evade Japanese justice . In the end, the team opted for Istanbul, where they had the collaboration of a local private jet rental company. The Turkish authorities have had seven people related to the case. Justice Minister Abdülhamit Gül confirmed on Saturday that five of the defendants – four pilots and another employee – have been placed in pretrial detention.

Upon arrival in Istanbul, Ghosn went on to a second, smaller, private plane aboard which he arrived in Beirut. The Lebanese authorities have confirmed that the businessman entered the country legally, thanks to a local identity card and a French passport, so they were not forced to stop him in immigration. Ghosn’s passports, which has Lebanese, French and Brazilian nationality, were held in his lawyer’s office in Tokyo as part of the terms of his probation, but it has come to light that He had a second French passport. Yesterday, however, the foreign minister of the European country, Jean-Yves Le Drian, denied this. “As far as we know, he didn’t use French documents,” he told BFM TV.

The government of Japan broke the institutional silence yesterday, with a press conference of the Minister of Justice, Masako Mori. “It is obvious that we have no record that the defendant left Japan, so we assume he did it illegally,” he said. The president also announced that the government has taken measures to prevent similar episodes from happening again, starting to strengthen airport security and the regulation of probation. Also, Mori had a few words to defend the Japanese legal system, which he described as “fair and open.” “It is not appropriate to focus only on one part of the system when making comparisons with other countries,” he said.

Ghosn, meanwhile, has announced that he will give a press conference on Wednesday of this week. The former president, who in his first statement on Lebanese soil said “not to escape from justice, but from injustice”, has maintained his innocence at all times, ensuring that the accusations are part of a plot against him orchestrated by the nationalist faction of Nissan, before their plans to carry out a total merger between the automaker and its partner, the French Renault. He has even dropped that in his next meeting with the media will provide evidence with which to support his allegation. The scriptwriters remain in expectation: the story is not over yet.