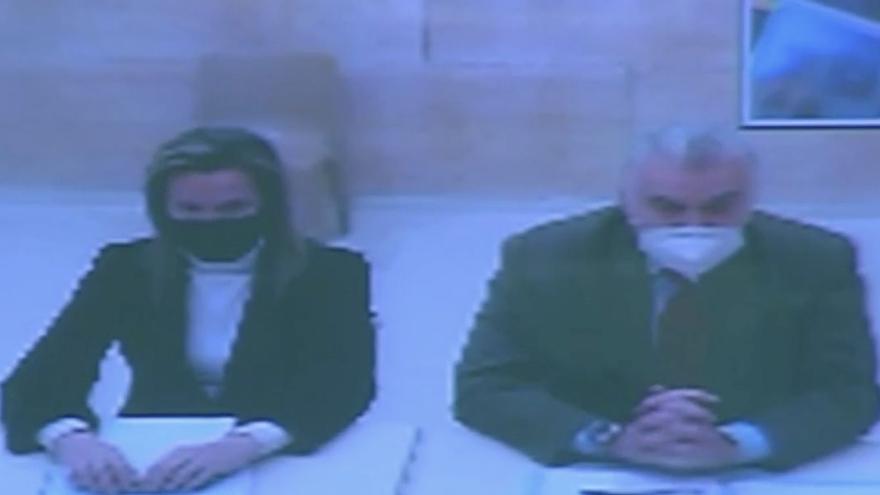 The success of the investigation commission of Operation Kitchen in its first session was to obtain the name of a PP politician, already retired, who in 2012 allegedly mediated with Mariano Rajoy so that Rosalía Iglesias, Luis Bárcenas’s wife, could enter the Hearing National for the garage and avoid the press. This is what the revelations during the ex-treasurer’s intervention in response to ten parliamentary groups for three hours were reduced.

The politician’s name is Alfredo Prada, former counselor of Esperanza Aguirre, to whom Pablo Casado gave a position in the party in 2018 that he later withdrew last November. The rest were refusals from Bárcenas to answer, questions that had nothing to do with Operation Kitchen or statements from the treasurer that he had already made on several occasions, in court and to the media. Bárcenas himself repeated, in response to questions, to various spokesmen: “This has nothing to do with Kitchen.”

Among the ten parliamentary groups are those who tried to find out what the PP Interior Ministry wanted to steal from Luis Bárcenas and those who had no interest in the “para-police” operation, as described by the judge and the Prosecutor’s Office. At this last extreme stood a PP deputy named Luis Santamaría, who decided not to ask Bárcenas any questions and turn his intervention into a list of alleged cases of political deviation and / or corruption of almost all the parties present.

The Popular Group spokesperson mentioned Venezuela, ETA, the Filesa case, the Neurona case, the ERE … He even devised an investigation that is not such on the supposed B box of Podemos or an interview between Commissioner Villarejo with José Manuel Villarejo to recover money that a “narco-regime” would have given to those of Pablo Iglesias. Santamaría also to the rest of the forces of wanting to turn this parliamentary commission into a “general cause” and an “inquisitorial trial” against the PP “violating” the mandate of Congress.

He insists that he recorded Rajoy destroying accounting papers B

To questions from the PSOE deputy Felipe Sicilia, Bárcenas reiterated that it is “public” that they stole two audio supports and “useful documentation” both for the trial of the First Era of Gürtel and for the one now held in box B, as well as “documentation on financing regional issues.” Regarding the recordings, he assured that one of them included the moment when he gave Mariano Rajoy money from the alleged box B and some documents with that accounting that the former president of the Government, according to his version, destroyed at that time.

“Did you record Mariano Rajoy in that conversation and destroying that accounting?” Asked the Socialist parliamentarian. “That’s right,” replied the former treasurer, who later explained to PNV deputy Mikel Legarda that he had made that recording not with the intention of blackmailing, but with the fear that “everyone would deny a reality” and to have proof that this was “the party’s accounting”, not exclusively annotations by him and Álvaro Lapuerta, who was treasurer during the almost two decades that he held the management of the formation.

It was not the only allusion he made to the former president of the Government and the PP. “It is an assumption, but I think so,” he replied when the Socialist deputy asked him if he believed that Rajoy was the one who ordered former Interior Minister Jorge Fernández Díaz to steal information that could harm the PP. Minutes later, to questions from ERC deputy Gabriel Rufián, he broadened the focus and pointed to the leadership of the PP at the time, whose main exponents were Rajoy and his number two, the then general secretary, María Dolores de Cospedal, and the that is publicly opposed. “Who’s behind [del operativo de Kitchen]? ”, Asked the parliamentarian. “I understand that the top leaders of the party and the Ministry of the Interior. The Popular Party of the time of Rajoy. Neither Aznar’s nor Casado’s ”.

The former treasurer also met again with Edmundo Bal, a state attorney during the trial of the so-called Epoch 1 of Gürtel, for which he is serving a sentence of 29 years in prison. To questions from the now Citizens’ deputy, Bárcenas pointed to the possibility that a “third person” was also at the origin of that operation in addition to Rajoy and Cospedal, although he did not want to reveal his identity. “I have no doubt that the operation is true, what we do not know is the ideological author. But it has to be a person of the highest level. There may even be a third person. I prefer not to give more names,” he said. “Excuse Francisco Martínez [el número dos del ministro Jorge Fernández Díaz en Interior]? “, Bal asked later.” Not much less, but he had someone above him. He does not organize such a media deployment without coverage from a superior, “said the former treasurer.

One of the most tense moments took place with the deputy of Vox Macarena Olona, ​​to whom he denied that no one from the PP would commit to him to better treat his wife Rosalía Iglesias if he collaborated and stressed that there were only proposals related to the defense in the framework of the Gürtel case. “I have not the slightest interest in answering you and I am not going to answer you,” he snapped when the deputy blamed him for arguing before the commission that he did not reach any agreement with the PP on his wife when in the letter he sent to the Anticorruption Prosecutor’s Office in February argued otherwise.

In fact, after finishing his interrogation, Bárcenas admitted that he had been surprised by the “clear interest” of the parliamentarian from the far-right formation to “discredit” his testimony. However, he stressed that he has “the best of opinions” from Santiago Abascal, whose father appears in his parallel accounts as the recipient of two million pesetas in 1999.

In his letter to the Anticorruption Prosecutor’s Office last October, Bárcenas confessed for the first time that the Aznar government awarded large works in exchange for bites for the PP. “The reason why Álvaro (Lapuerta) received these donations directly was because he was a person of the Party’s highest confidence and the person designated to inform -if it were the case- to the minister who was competent by reason of the work or service that could be affected by the specific public award, “said the treasurer at the time. ERC deputy Miriam Nogueras asked him if there was an accounting of these alleged compensation, something that Bárcenas categorically denied. “Clear considerations did not exist. There is no book in which it appears ‘delivers 60,000 euros, 2% of such amount as a result of the award’. That has never been so clear ”, replied the former treasurer.

As he did in that letter, Bárcenas reiterated in Congress that senior party officials and members of the Aznar government received opaque payments. He did so when the Bildu deputy Oskar Matute listed what he defined as the “dream team” of the PP: Rajoy, Cospedal, Francisco Álvarez Cascos, Rodrigo Rato, Federico Trillo … The former treasurer said again that all the leaders who listed in his handwritten annotations charged at B at some point. “We are older and we know that if we receive an envelope with money, it does not come from under a brick,” he said. And, as he did before the court that judges box B, he asked them for “courage” to recognize it, although he clarified that this does not mean that “everyone” was aware of the illicit origin of the money.