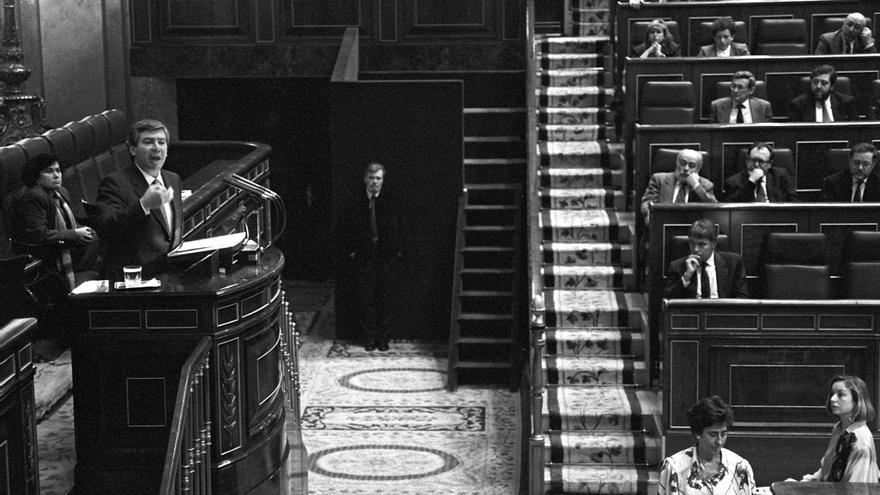 “In the end, it all came down to the old tension between freedom and security.” The phrase of the former PNV deputy Emilio Olabarria sums up the “glassy” parliamentary negotiation that preceded the approval in February 1992 of the Citizen Security Law, one of the most controversial projects promoted by Felipe González’s PSOE. The rule – which the Socialists carried out thanks to the support of Basque and Catalan nationalists – allowed police searches of homes without judicial authorization in drug trafficking cases, a precept questioned by the rest of the opposition, the judges’ associations and the majority unions and that It ended up annulling the Constitutional Court nine months later, taking its promoter, Interior Minister José Luis Corcuera, ahead of it.

The name of that minister and the expression ‘kick in the door’ – as the law was colloquially called, much to his regret – has recently returned to the present day by the police raid by force and without a court order at clandestine parties in which the regulations on COVID-19 were violated. As almost three decades ago, the debate has pivoted in recent days on the freedom-security dialectic and the interpretation that the courts have made of the concept of “flagrante delicto”, the only case in which the Constitution allows the Police to access an address without judicial resolution.

That law authorized the Security Forces and Bodies to enter a home without the endorsement of a judge as long as they had “well-founded knowledge” that would lead them to “certify” that a related crime was being committed or had just been committed. with drugs. That article was declared unconstitutional considering that those expressions – that the judgment qualifies as “ambiguous and indeterminate” – they would allow entry and home searches “based on conjecture or suspicion” and that “never, by themselves, would be enough to configure a situation of flagrante delicto”. The Constitutional Court did support the article that allowed agents to take a person against their will to police stations to be identified, also highly questioned at the time.

After that sentence, Corcuera, who had already warned that he would leave office if the Constitutionalist changed a comma in his law, submitted his irrevocable resignation. The former minister, who declined to attend elDiario.es, has defended publicly that the court only modified one word of the norm – “proof” for “evidence” -, although the sentence states that the “legal delimitation of flagrante delicto” expressed in the challenged article was contrary to the Basic Law and declared it unconstitutional In its whole. That precept and another paragraph of an article on the sanctioning regime were annulled but the rest of the law was in force until the PP, very belligerent at the time, approved a new regulation on citizen security in 2015, the so-called gag law.

The approval of the Corcuera law was preceded by an intense debate in Parliament and outside it, according to several deputies who participated in the negotiations. The Government promoted this project as a way of solving the drug trafficking problem at a time when drug retailing and crime were absorbing the lives of the poorest neighborhoods, where citizen patrols were set up due to the popular belief that the Police were overwhelmed. But part of the opposition, judges and civil society organizations – including the CCOO and UGT unions – questioned that far from being a remedy against a pressing problem, that law subjected the country to a kind of police state. They even got to celebrate large demonstrations calling for her withdrawal and Joaquín Sabina, who participated in those protests, sang against her in two of her songs.

The former socialist deputy Álvaro Cuesta, one of the negotiators of that rule, recalls the “tensions” with the Ministry of the Interior at the time, whose officials assures that they were busy transferring to the parliamentary group that supported the Government the need for a law that many they did not see clearly in the socialist ranks. “The obsession of the moment was the fight against drug trafficking. I remember that we were shown police operations in which we were shown that without the law the Police had very little room for maneuver in certain situations. It was a moment in which there was a very harsh criticism of the government for the increase in insecurity and drug trafficking, but that did not justify the unconstitutionality of the project, “he assures.

Cuesta refers to the first draft that Interior presented, which was severely criticized by the General Council of the Judiciary (CGPJ) in a report in which it warned of the “very doubtful constitutionality” of some of its articles and directly requested the replacement of several of them, including the one with the ‘kick in the door’. “In that first draft, an almost indiscriminate entry into homes was contemplated. The great challenge was to undress the articles in that first phase, in which there were several amendments to the entirety and an important rejection of the Chamber,” says Cuesta, today a vocal from the CGPJ, which affirms that the text was finally approved thanks to the “capacity for dialogue” of the CiU negotiators, Josep Maria Trias de Bes and Miquel Roca; and the PNV, Emilio Olabarria.

Almost thirty years have passed since those debates, but Olabarria, today far from the front line of politics, admits that it is one of those laws that are difficult to forget. “It was a curious debate, the law had positive aspects and other more doubtful ones,” affirms the former Basque deputy, who on the day of its approval in Congress insisted from the rostrum that the text that was being discussed at that time had “almost no nothing to do “with the bill that was originally presented to the Chamber.

Three decades later, Olabarria acknowledges that he was not one of the deputies most critical of the ‘kick in the door’ – he recalls, in fact, that the press went so far as to say that he had made an almost more enthusiastic defense of the law than Corcuera himself -, although he claims to feel more in favor of the text that was maintained after the Constitutional ruling, a resolution that, in his opinion, could have been avoided with a better definition of the concept of flagrante delicto. It also admits “certain temporization” of the PNV in these negotiations due to the guarantee of competence that the law attributed to the autonomies in full struggle for the conversion of the Ertzaintza into a comprehensive police force.

The harshest words of the Basque deputy are for the former minister Corcuera, whom he remembers as someone who is not in favor of accepting the amendments of the rest of the groups. “He had a very personal style, heartbreaking in form and lazy in foundation,” he says. Joseba Azkarraga, then a deputy for Eusko Alkartasuna, a formation that was directly opposed to the law, also dedicates thick qualifications to the former minister, whom he defines as a “sinister” and “negative” person.

“Within Corcuera’s simplistic scheme, everything that sounded Basque was a symptom of terrorism. In the debates I always brought out my closeness to ETA, which was not true,” says Azkarraga, who was the Basque Minister of Justice, Employment and Social Security and that at different stages he has acted as a mediator in the reintegration of prisoners from the terrorist gang.

In his opinion, the “tweaks” of the draft that were made during the parliamentary process did not soften a norm that he qualifies as “unnecessary, ineffective and restrictive” and that marks the “saddest, irresponsible and unfortunate” stage of the Government of Felipe González. . “After the practices of the dirty war and the GAL, the socialists embarked on a spiral of cuts in rights that culminated in this debate on freedom and security, where the PSOE returned to the error of choosing only security,” he says .

The law was also opposed by the United Left, which was then the third largest parliamentary force with 17 deputies. The day it was approved in Congress, its spokesman in the Justice and Interior Commission, José Luis Núñez, began his speech precisely by accusing the PSOE of having made the partridge dizzy “to the limit” during the parliamentary process so that, in the end, everything remained almost the same. “This law is ineffective, unnecessary, clearly invades constitutional precepts, attacking them and that creates an autonomous police space that avoids the control of the judges. This law is, basically, the verification of the failure of what is the police policy that this has carried out. Government, “said Núñez, who spoiled the” step backward “in the development of freedoms that the Socialist Group had been doing until then.

But undoubtedly the strongest opposition was made by the Popular Party. His spokesman for Justice and the Interior, the late Rogelio Baón, defined the rule as “a legal engineering project determined to overcome the numerous obstacles to constitutionality.” Although the toughest clashes took place between Federico Trillo, then parliamentary spokesman for the Conservatives, and Minister Corcuera. In the rostrum, Trillo described the law as a “mess” and accused the Socialists of having been throwing “things on it” to “obscure” the “legal barbarity” that was some of its precepts. “Today people are afraid, Mr. Corcuera, and that is the opposite, as everyone knows, to freedom; and you are angry. Well, keep your fear and anger away and leave us all with our freedom,” he said. in another moment of the debate paraphrasing the famous song of the Transition.

“The socialist government was in the middle of its third term, but it was beginning to have some problems. Objectively it was a very good opportunity in parliamentary terms to erode the Executive,” says Cuesta about the conservatives’ strategy. “It is true that the PP was very critical, but then it made an even more debatable law,” adds Olabarria, alluding to the gag law of 2015, widely used to sanction those who skip the anti-COVID-19 restrictions and which was endorsed almost entirely by the Constitutional. Just a few weeks ago, last February, the PP stayed only in Congress in their attempt to keep that law intact, while the PSOE and United We can maintain their intention to repeal it. The discussion between freedom and security will undoubtedly return to the parliamentary debate.

It is better to lose to Díaz Ayuso than to die

Farewell in two acts of Pablo Iglesias, the man who proposed to storm the skies and managed to be vice president of the Government

The PSOE shows the door to Gabilondo