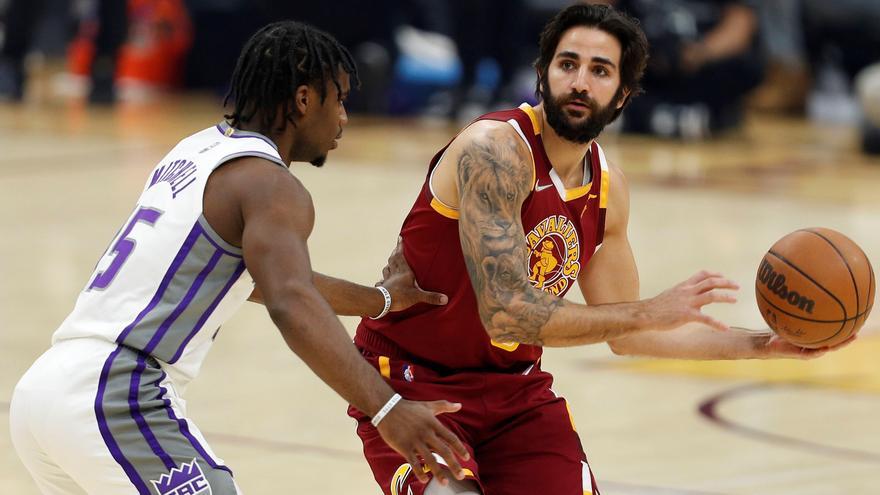 The Cavaliers accumulated their third consecutive victory on Saturday night by defeating the Sacramento Kings 117-103 in a match where the performance in the last minutes of the Spanish point guard Ricky Rubio was decisive to ensure the victory from those in Cleveland. Rubio played the last 8 minutes of the game, after the Kings dangerously shortened the gap after a 2-12 run, and in addition to reassuring his teammates on the court when it seemed that the game was getting out of hand, he was the author. of two decisive triples in the last 2 minutes. With those two triples, Rubio scored a total of 15 points, in addition to getting 2 rebounds, 3 assists and 3 steals in 26 minutes of play.

Seven Cavaliers players, one total team that exhibits a great level of rapport between all its lines, they finished the game with more than 10 points to their credit and three of them with double-double. Point guard Darius Garland had 16 points, 13 assists, 6 rebounds, 3 steals and 1 block while the two tall men, Jarrett Allen and Evan Mobley, also accumulated double-doubles. Allen posted his 100th career double-double with 19 points, 11 rebounds, 1 assists, 2 steals and 3 blocks while rookie Mobley had his double-double with 15 points, 15 rebounds, 2 assists and 1 block. The Cavs 'top scorer was forward Isaac Okoro, with 20 points, 4 rebounds, 3 assists and 2 steals while the Kings' most outstanding player, and the game's top scorer, was guard Buddy Hield who after starting the The game on the bench had 21 points, 5 rebounds, 2 steals and 2 blocks.

The Cavs started the game as a carbon copy of the one they beat the Timberwolves in Minneapolis on Friday. As soon as the ball was in play, Cleveland's starting five - Garland, Okoro, Allen, Mobley and Lauri Markkanen - put heavy pressure on the Kings on defense. In attack, Cleveland were dedicated to exploiting the wingspan of Allen, Mobley and Markkanen. And, as against the Wolves, the scheme worked perfectly. In just under 2 minutes into the game, the Cavs were already 6-0 with points from Markkanen, Mobley and Garland from the paint. At 4 minutes the score was already 11-3 and 2 minutes later, when the Kings coach, Alvin Gentry, was forced to call his first time-out, the distance was 12 points, 18-6. While Okoro was the most effective of the Cavs, Hield, who had started the game off the King's bench, was the one who made the baskets for the Sacramento team. When the first quarter ended, the scoreboard was 36-23.

But it was in the second quarter that the Cavaliers made their statement with a total of 45 points in 12 minutes. The locals initially settled for keeping the Kings at bay but in the final 4 minutes before halftime, the Cavs punished the Sacramento side with a 20-7 run that included a 12-0 in 99 seconds. Rubio's men moved the ball quickly in attack, dislodging the Californians' defense, allowing Cedi Osman to score 2 consecutive three-pointers. On defense, Allen and Mobley's rebounds and blocks ended up sinking the Kings.

When the teams went to rest, the scoreboard indicated an unappealable 81-52. But in the second half of the game, the Cavs allowed the Kings to come back to life. In the first 4 minutes of the third quarter, the visitors chained a series of hits in attack that Cleveland's team could not answer, making a run of 2-13. And although at the end of the third quarter, the Kings had reduced the difference to 23 points, 101-78, the margin seemed comfortable enough for the Cavs to have no problems.

At the end of the game, Cavs coach JB Bickerstaff acknowledged that he misread the situation, allowing the Kings to regain 17 points and get dangerously close, 103-96, to the Cavs with 6 minutes remaining in the game. It was then, when the team needed it most, when the best made an appearance blond. The point guard took control of the team and when the team's shooters, such as Garland or Osman, failed in attack, with 2.18 remaining, El Masnou's scored his first triple that took the Cavs away 11 points, 110-99. After the triple, Rubio stole a ball in defense that increased the distance to 112-99. And when the Kings responded with an "alley oop" from Chimezie Metu, Rubio sentenced the game with another triple that left 115-101 with 1.34 remaining with the final horn. Rubio would still have time to steal another ball before the score stayed at 117-103 final.