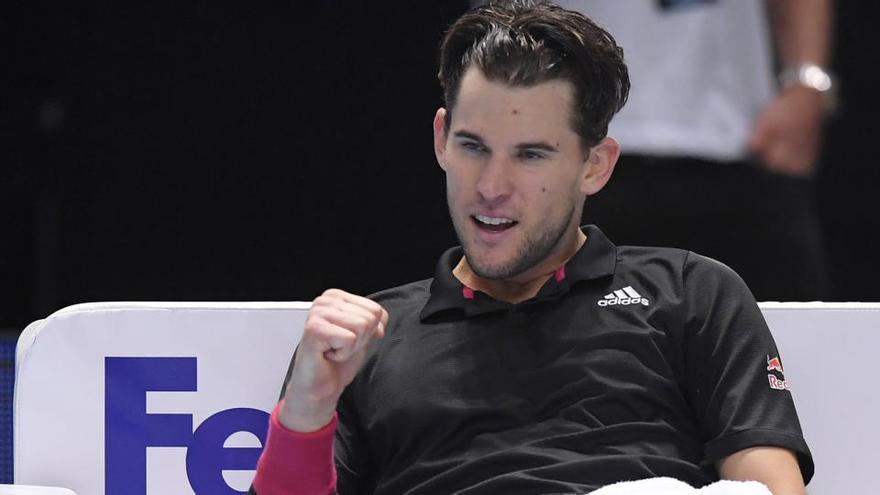 Dominic Thiem put his solvency and stamina to the test to survive the mental weight of wasting four match points before managing to survive number one, Novak Djokovic by (7-5, 6-7 (10) and 7-6 (5).

The Serbian, who remains for the fifth consecutive year without equaling the six titles of Roger Federer, succumbed to a Thiem who, after winning the US Open, finally shows that he has the necessary head to fight for the great titles.

Even though i was close to throwing it all away when he didn’t convert four match points in the ‘tie break’ of the second set, a mental blow that did not knock him down and that prepared him for a third set where he did seal the victory in another tiebreaker, this time marked by the shipwreck of Djokovic.

Titanic from the start

And that the battle, as promised, was bloody from the beginning, with two players keeping their cards and resisting the opponent’s stakes, alternating the 0-30 saves and without smelling the ‘break’ balls, non-existent during much of the first set.

While Carlos Moyá analyzed Rafael Nadal’s possible rival in the stands from the stands, Thiem and Djokovic played a choral symphony in which the strength of the Austrian was counteracted by the elasticity of the Serbian.

The ‘give and take’ reached a point where even Djokovic applauded a big balloon from Thiem, which landed on the line and gave him the point.

But the chivalry was suddenly gone when the game after that wonderful blow was followed by a break from Thiem, delivered by a bad volley from Djokovic.

Nicolás Massú’s pupil got 6-5 in favor and finished the set with an ‘ace’.

Problems for a Djokovic who has not won here since 2015 and that he had already given up the opportunity to match Federer’s six crowns four times.

But the Belgrade was not put into jackal mode. He followed in tow of a Thiem that seemed more complete and that above all appeared to be alive.

While he complained, celebrated and raged, Djokovic walked inert. On many occasions crestfallen and looking askance at his bench.

In a favorable situation, one would speak of a legendary concentration, but with the score against it, one could speak of apathy, one of his sins in the first defeat in this tournament against Medvedev.

He needed to see himself on the edge of the abyss to wake up. He saved another breaking ball and carved the first in his favor after an hour and 20 minutes of play, but a long rest devoured him.

How Thiem gobbled up Djokovic’s two set points in the twelfth game. The Serb was getting closer, but he ran out of time.

Set opportunities were lost, Thiem forced a tiebreaker, and while Djokovic entertained himself at breaks juggling his racket, the match was gone.

And not without drama. Thiem came back from an adverse 4-2, took two match points, lost the first after a great serve from Djokovic and double faulted in the second. Djokovic did not take advantage of the set point in favor, with 7-8 and Thiem once again had one on serve, wasted with an open right and another to the rest, also inert.

With four finishing chances thrown, Djokovic turned around. The set was scored 12-10 and sent the fight to the final set.

A sleeve that ran fast. In just half an hour, ten games had been consumed, without a single chance of breaking. When Djokovic was closer, in that eleventh game, with 30-30 on the scoreboard, he threw a long rest and screamed, as he had not done in the whole game.

The mood of a Thiem did not change who took the match back to the ‘tie break’, where he had already buried four match points. And he started it in the worst way with a double fault. Djokovic scored four consecutive points, but that’s where the Serbian’s shipwreck came.

The Austrian returned the streak with six points in a row and at the fifth match point he signed the ticket for his second final in London, after losing last year to Stefanos Tsitsipas.

Thiem will face the winner of the duel between Daniil Medvedev and Rafael Nadal in the final this Sunday (18:00 GMT).

The 10 signings: more lights than shadows