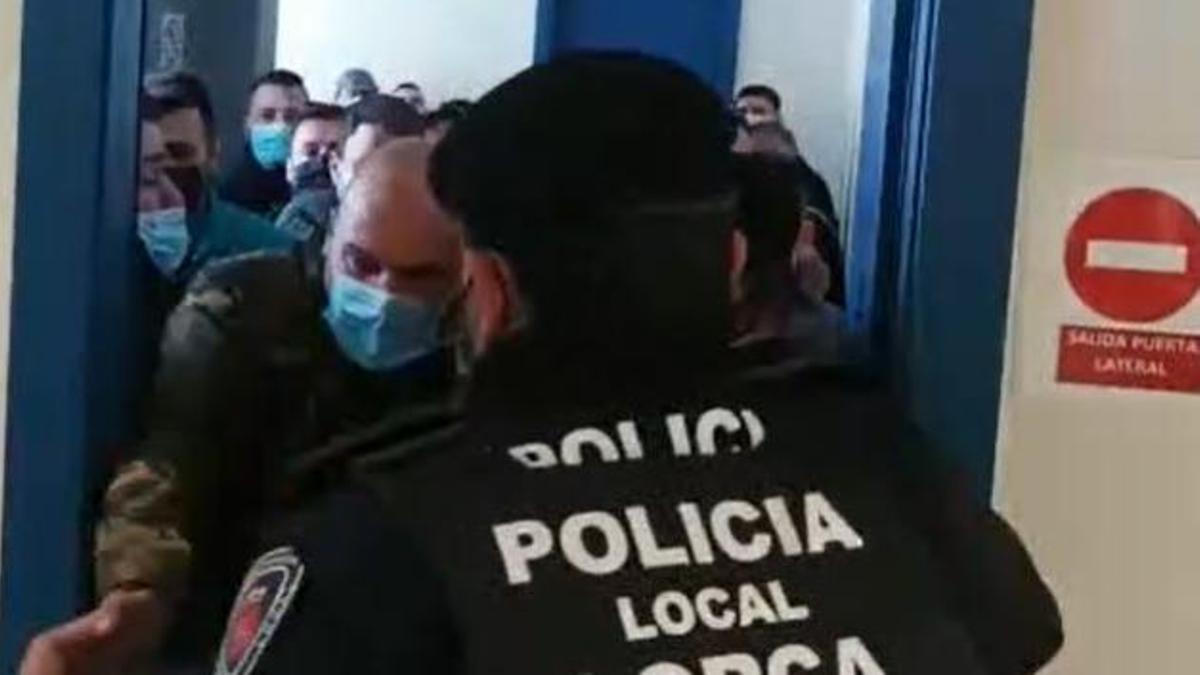 The PP moves between regret and justification given the many attacks suffered by members of the Government since it took office in January 2020. The events are condemned to immediately justify what happened and warn that things could get worse. This was the case after Yolanda Díaz, Ada Colau, Mónica García and Fátima Hamed were attacked on October 12 by a small group of protesters before the act began. Other Policies which was held in Valencia. "Either they change course, or they will not be able to go out into the streets," was the response that came from the PP through the mouth of its secretary general, Teodoro García Egea. A phrase very similar to "wait for people to go out on the street, that Núñez de Balboa is going to seem like a joke" that Isabel Díaz Ayuso blurted out in May 2020.

The last example has been that of Lorca (Murcia). Last Monday a group of people stormed the City Hall and injured four policemen in their action. The reaction of the local PP was to point out to the Government: "Today the countryside has exploded against the continuous attacks of the PSOE." In case there was any doubt about the phrase of the president of the party in the town, Francisco Gil, the Lorca PP left it written in his web page. "They have been dragged into a limit situation," said Gil on the afternoon of the assault. "The field has reacted," he continued. Only at the end, in an inconclusive way, did he say he rejected "any altercation that has occurred."

The Lorca leader's message was released by the party's Twitter account, but the message was later deleted, although it can still be seen on the cache of Googlealong with the accompanying text: "You cannot play with the bread and the desperation of thousands of families."

An inverse order to that chosen by the Murcian president, Fernando López Miras, who did not miss the opportunity to justify the protagonists of the violent assault on the municipal building. "Together with the condemnation of these acts, I ask for dialogue and consensus before making decisions that compromise the future of so many families," he said on Twitter.

It has been the trend of the last hours: to denounce, in a more or less veiled or vehement way, the violent acts, but to justify them and elevate it beyond the local sphere to the central government. "The ranchers have a problem because they have an absolutely unfortunate government with a man who is insulting the quality of Spanish meat," said the former president of Congress Ana Pastor.

The throwing of eggs against Díaz, Colau and others was something that does not happen to the PP, according to its number two. "Nobody throws eggs at us in the street," said García Egea, who pointed out that the aggression "is a symptom of the Government's exhaustion." García Egea's phrase recalled another that the president of Madrid, Isabel Díaz Ayuso, snapped, about months before, during the first confinement in 2020: "Wait until people take to the streets because the Núñez de Balboa thing is going to seem like a joke."

Ayuso made such an assertion during a control session in the Madrid Assembly and after different illegal demonstrations took place in one of the richest neighborhoods in the wealthiest district of the capital. The Madrid president justified the protests, with the destruction of urban furniture included, for the "attacks" that the Government had allegedly perpetrated against "the neighbors, who are going to go bankrupt." Among the reasons that Ayuso gave for the neighborhood anger, the doubts about whether or not the summer sales were going to be allowed.

By that time, May 2020, the daily harassment of the then second vice president, Pablo Iglesias, and the Minister of Equality, Irene Montero, had already begun at home. For months, a group of ultras gathered daily in front of the house where the couple lives with their three children, hurling continuous insults at the residents and those who visited them.

As Ayuso anticipated, and Egea would say months later, this harassment considerably limited the freedom of movement of Iglesias and Montero, as well as that of their children, and did not cease until the former secretary general of Podemos resigned from all his positions after the May 4 elections. Before, one of the leaders of the marches in front of the house was caught red-handed inside the house, facts for which he is awaiting trial.

In other cases, there has been a condemnation by the party's top leadership. Pablo Casado did it when Iglesias, in addition to the Minister of the Interior, Fernando Grande Marlaska, and the director of the Civil Guard, María Gámez, received two threatening letters, with bullets inside. But within his party there were those who questioned the veracity of the letters. "Does anyone believe that an envelope with four ten-centimeter bullets reaches a minister?" Said a provincial deputy from Alicante, Alejandro Morant.

The one who was then a rival of Iglesias at the polls, Isabel Díaz Ayuso, said she condemned "any threat, as always." It was the mayor of Madrid and national spokesman who was then in charge of leveling the balance: "The Iglesias thing is an exercise in hypocrisy and cynicism because he cannot ask us to condemn him and when they are of his ideology, he issues justifications." A statement that could well be applied to what has happened in Lorca in recent days.

Tags: get out, government, no, PP, protests, reaction, Street, violent