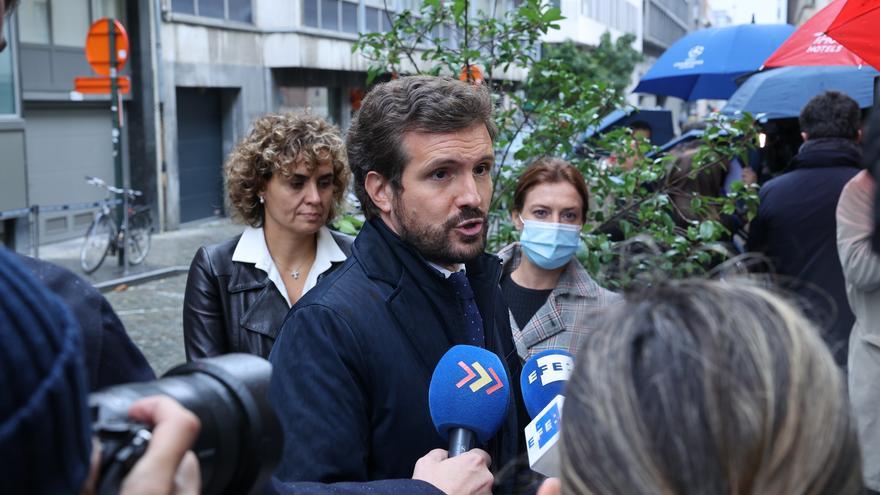 The Spanish reform plan was approved with 10 A’s and a notable. The president of the European Commission, Ursula von der Leyen, went to Spain to congratulate the Government and deliver her evaluation. Brussels has already delivered a first batch of 9,400 million, and Spain is expected to request a second, of 10,000 million, in the coming weeks that would arrive before the end of the year.

“Is it going to continue to make public spending to buy votes, such as the bond for new voters of 18 years with the European effort?”, Married asked at the gates of the headquarters of the European PP in Brussels: “Do we want to buy comics and video games with the help that community partners give us? Are you going to tell it here? ”

However, the cultural bonus for those who turn 18 is not something that is included in the reform plan delivered by the Government on April 30 to Brussels. Neither in any of its files or developments. Moreover, it is a proposal announced by the Government on October 6 with a view to the budgets, which comes from the national budget and not the European one.

On the other hand, the idea announced by the Government is similar to what is called in France Pass Culture and it was one of the president’s campaign promises Emmanuel macron. Extremely popular with young people – used by more than 750,000 people, equivalent to 85% of French 18-year-olds – this cultural voucher offers 300 euros to spend for up to two years. The offer is wide: exhibitions, films, guided tours, art and music courses, concerts, books, instruments, video games and subscriptions to newspapers and platforms in streaming.

The implementation of this bonus was progressive. It began to be established in 2019 in some regions of the country, but it was not until May of this year when spread to all of France, coinciding with the reopening of leisure and culture after six months of confinement. In addition, as of 2022, it will cease to be an exclusive aid for 18-year-olds and will be extended to minors who turn 15, 16 and 17 years old.

In Italy, for its part, culture bonus was implemented in 2016 by the former Prime Minister Matteo Renzi: a grant of 500 euros to all young people who reach the age of majority that can be spent on cinema, music, concerts, cultural events, books, museums, monuments, theater, courses of foreign language, audiovisual publishing products and also newspaper subscriptions, reports La Vanguardia. The system is easy to use: just download a mobile application, register and download coupons to purchase these cultural products.

The president of the PP has also criticized the parliamentary collaboration between the Government and EH Bildu, which on the tenth anniversary of the end of ETA apologized for the damage caused. Thus, Casado has compared that collaboration with “Joe Biden agreeing his budgets with those who attacked the Twin Towers.”

Despite the fact that in EH Bildu there are parties that never supported violence, such as EA, Aralar and Alternatiba, and the words of Arnaldo Otegi a few days ago, Casado insisted: “Moderation, Europeanism and social democracy is not a compromise with politicians who justify the murder of 850 innocents “.

“It is their decision, but you cannot blow and sip at the same time,” Casado said: “Either you are with the radicals, the batasunos, the independentistas and the communists, or you are with moderate Europe, which also represents the Popular Party. Here we govern in coalition [la Comisión Europea está compuesta por populares, socialistas y liberales]”.

Faced with the hypothesis that Ángel Gabilondo could be the PSOE’s candidate for Ombudsman, the PP president has stated: “The negotiation continues its course and, therefore, we are not going to make any assessment until it ends. Yes, I have said publicly throughout the process that the jurisdictional bodies, not only the Judicial Power, but the bodies that are not the Judicial Power, but are jurisdictional, such as the Court of Accounts and the Constitutional Court, should not be assumed by any politician in office, should not have no former politician. ”

Of course, the Ombudsman is not a jurisdictional body, with which Casado comes to leave the door open for him to be a viable candidate.

And the extreme right? “Cheap demagoguery”

The European Council that takes place this Thursday and Friday in Brussels is Angela Merkel’s number 107, and it may be the last if the negotiations for the formation of the German Government go fast, which the Council itself trusts, which has prepared a family photo with the outgoing German Chancellor as a tribute.

Will the Spanish PP take Merkel’s legacy of never making an agreement with the extreme right? Casado avoids closing the door to agreements with Vox, such as those that have allowed the PP to govern Madrid, Andalusia or Murcia, for example: “Merkel has been an essential leader for our party and for Europe. And I believe that those signs of moderation, that reformist center that the People’s Party has represented for 30 years, since our foundation and that was also key together with the CDU to found the European People’s Party. We want to build strong governments, complying with the principles and values ​​that have always made Europe and one of them is economic recovery and job creation, which is the only thing that the welfare state finances. The rest in the end is cheap demagoguery. ”