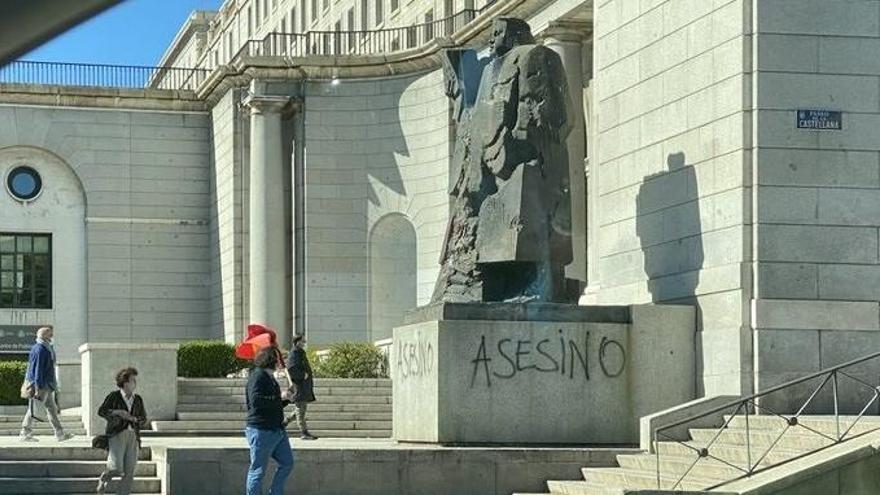 The statue of the former president of the PSOE and Minister of Finance, Defense and Public Works of the Second Republic Indalecio Prieto, located in the Nuevos Ministerios de Madrid, has dawned this morning with the painting of ‘Assassin’, the same thing that happened to him a few days ago to the nearby statue of the former president of the Republican Government Francisco Largo Caballero.

“It is not an act of vandalism or another graffiti. We are not going to allow hatred to permeate our society. We work to protect the present and the future of Spaniards against threats. We will continue to defend the memory of Indalecio Prieto and Largo Caballero. Always “, has written the PSOE on its Twitter account to denounce the attack.

This second attack occurs three weeks after the Madrid City Council, with the votes in favor of Ciudadanos, PP and Vox, decided to remove the names of Avenida Francisco Largo Caballero and Boulevard Indalecio Prieto, as well as the plaque in the Plaza de Chamberí dedicated to the former, in addition to urging the elimination of the statues erected in Nuevos Ministerios in his memory.

After the attack on the Largo Caballero statue, Vox threatened the Government on Twitter, calling what happened a “first warning” to repeal the Historical Memory Law. This Monday the deputy of Vox in Congress Macarena Olona has published in her networks a photograph in which she appears in front of the statue of the former president of the Council of Ministers of the vandalized Republic carrying a flag of Spain with the black crepe in which to read ‘Government resignation’. “Madrid resists”.

The proposal to eliminate the streets of both socialist politicians was presented in Cibeles by the municipal spokesman for Vox, Javier Ortega Smith, with the aim of ending any tribute to what he described as “sinister characters” such as Largo Caballero and the socialist minister in the Indalecio Prieto Republic. “Both are exponents of totalitarian anti-democratic criminals who do not deserve recognition on the streets of Madrid,” he said.

The president of the Plenary, Borja Fanjul (PP), justified the support for the elimination of this tribute in the street in article 15 of the Historical Memory Law, which allows administrations to remove shields, plaques or commemorative mentions “of the exaltation of the military uprising, the Civil War or the repression of the dictatorship “.

The intention of the Madrid City Council to eliminate the names of the historical socialists from the street map of the capital has provoked the reaction of historians. A hundred scholars of Contemporary History, from Spanish and foreign universities, have signed a report that dismantles the arguments of the extreme right, assumed by PP and Ciudadanos, to remove the two streets – an avenue in Ciudad Lineal and a boulevard in Vicálvaro – supported by the Law of Historical Memory.

The signatory historians conclude, after analyzing the text of Vox approved in the Plenary of the City Council last week, that it is based “on old and discredited pseudohistoric clichés of Franco’s propaganda”. “It confusingly carries the civil war myths enunciated in 1939 by the Opinion of the Commission on the illegitimacy of powers acting on July 18, 1936”, says the letter, supported by renowned experts such as Paul Preston, Walther L. Bernecker, José Álvarez Junco or Antonio Cazorla.

Professors and professors deny Vox’s proposition 13 points in a “preliminary analysis” based “on documentary evidence.” “Unlike the null documentation that is attached to the Vox initiative, the undersigned professors and researchers declare that they are in a position to provide documentary evidence of all the claims made in this verification test,” says the manifesto. The signatories make the document “available” to the Madrid City Council so that it is taken into account before adopting “the final decision”: “This preliminary technical judgment aspires to become a report in the near future where it is clarified once and for all all the performance of these two important figures in our contemporary history, subtracting them from the machinations of low politics “.