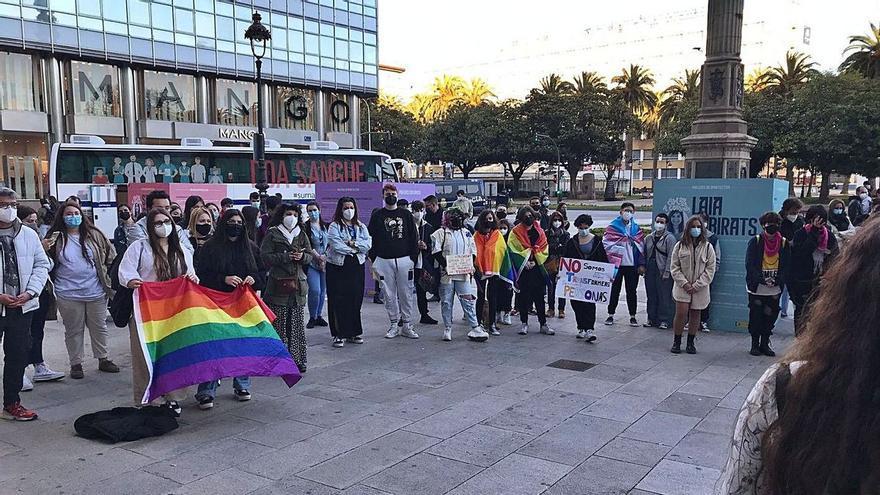 In the gael story it brings together everything that a child of only 15 years old should not live. A set of traumatic experiences make up the first three decades of life, to the point of pushing the young man to want to say enough in the most drastic way a few days ago. Before that, the little boy had already gone through admissions to psychiatry, depressive episodes, anorexia, self-harm and, above all, misunderstanding and contempt on the part of an important part of an educational environment from which he only received rejection and violence due to his condition of young trans.

The harassment and harassment that led to the suicide attempt on April 14 began years ago: her mother refers to the nursery and primary courses, when his peers made the little boy the object of their constant teasing. “They made fun of him, called him fat, laughed at him because he was a vegetarian,” recalls his mother, Silvia. Then his only friend repeated the grade and Gael was left even more alone. With the arrival at the institute the real ordeal began. At first, nothing augured it: the little boy believed he had a group of friends he could trust. So much so that one day he decided to confess his status as a trans boy. “He felt good and had confidence. So, he confesses to them that he is a boy. The girls told him that they did not want to know anything about him. That’s where the insults began,” Silvia recalls.

The next day, the whole class knew that precious secret that Gael believed he had confided to a few. Vexations became the daily bread. “They called her by her previous name, they called her ugly, fat, transformer”, says Silvia. It was the beginning of a loop of psychological violence that led to physical: shoving and tripping soon arrived, and something began to break inside the little boy. “He never told us anything. At home he was a sad child. He spent the day reading or playing the guitar or ukulele. We asked him why he didn’t go out with friends and he told us that he didn’t like them. what was happening through my head, “he says.

In 4th year of ESO, Gael says enough and asks his parents to change institute. Soon after, he takes the important step of telling them what he has been silent for years: he is a trans boy and his name is Gael. In his family, he finds the support and protection that, unfortunately, many children in the same situation are denied and that was costing Gael his health outside the home. “In the new institute he told it at the time. There it was a marvel, both the director, the counselor, the head of studies and the tutor behaved wonderfully“, Silvia acknowledges. When it seemed that, at last, things would start to be easier for the young man, Gael’s behavior began to send alarm signals to his loved ones: little by little he stopped eating, his mood did not but he got worse and began to miss the bus, to ask his parents to pick him up from the center before the time and to use daily reasons for not going to class.At Christmas we noticed that she had anorexia. There was no way i would eat. We went to a psychologist, but it was getting worse and worse. One day he began to faint and have an anxiety attack. We took him to the emergency room and there they told us we had to try to get him to eat, “says Silvia. The problem, as they would discover later, was not in high school. He was on the bus, at the entrance and exit of the center, where he met his former classmates, who continued to make life miserable even after changing centers.

It did not take long for him to be admitted, by court order, to the psychiatric ward of the Hospital Marítimo de Oza. A first admission that plunged the young man into the abyss: isolation, misunderstanding and even harassment by staff members and other inmates. “A nurse told him that if it were his mother, he would not allow that, that he was capricious and that he would always be a girlThat he was going to call him by his name from before, “Silvia denounces. That first admission was followed by others, and the only constant was the progressive worsening of the young man, subject to aggressive treatment that did not reduce his anxiety or alleviate his anorexia.

The last admission was, for the child, the final thrust: a medication that caused him intense pain, inattention from the staff and a myriad of dramatic situations that it was difficult to refer. In the end, the little boy left the psychiatric hospital to rejoin the classes with scars of self-harm, but the real damage was invisible to the eyes. Bus situations resume. One day, Silvia received a call from the institute that she will never be able to forget. “They tell me to run, that Gael took two blisters of Rivotril and one of Mirtazapina and that he cut his arm“says the mother.” I thought I was dying. ”

The mother highlights the involvement of the Civil Guard and the professors of the young man’s institute during the process, in whose condition they were interested daily while Gael was admitted. On the part of the management of the center of the schoolchildren who participated in the harassment, they only received contempt and silence. “When I went to talk to him, he almost laughed at me. He told me it was impossible for them to do those things, and blamed Gael for his way of being.. I asked him to have a meeting with the children’s parents. Given that they still grow up, mock and mess with my eldest daughter, I decide that I am going to file a complaint, “Silvia ditch.

Even with a complaint on the table, neither Gael nor the rest of the people in the group feel safe in the face of what they consider to be far from an isolated case. “Hate towards trans childhoods has gotten a lot worse in the last year“, judges Patrick Dopico, representative of the Amizar collective. They denounce that, in addition to Gael, other trans minors, increasingly young, go through situations of harassment and intolerance inside and outside the classrooms, which lead many to think about suicide. “There is a quite hostile environment in general, both towards trans children and adults, but adults have more developed tools,” judges the representative of the group.

“Gael, escoita, querémoste na loita,” shouted the members of the LGBT associations that, after the dramatic event, concentrated in the city to report the events and call for the cessation of transphobic harassment of minors like Gael. “Gael’s enemy was being a trans man in a world where the different is marginalized. Like him, many people try to commit suicide because they feel denied, humiliated and harassed, “the convening groups cried out in A Coruña, including Chrysalis, Amizar, Alas A Coruña and Abre Fenda.

The groups in defense of sexual affective freedom and gender identity came together, on this occasion, under the name of Gael, knowing that anyone present could have been pushed into a similar situation. The group is clear about it: in the face of intolerance, union and commitment. Silvia, Gael and his family found him in the associations dedicated to trans childhood that they turned to after everything they had experienced. It stands out, above all, the protection of entities such as Chrysalis and Open Fenda, whose members owe them to feel much less alone on the road. “At Chrysalis they went out of their way, they wrapped us up like our family. Gael made wonderful friends there. In opening Fenda they are exceptional people.”

Tags: Gael, in a hurry, Institute, outside, they said