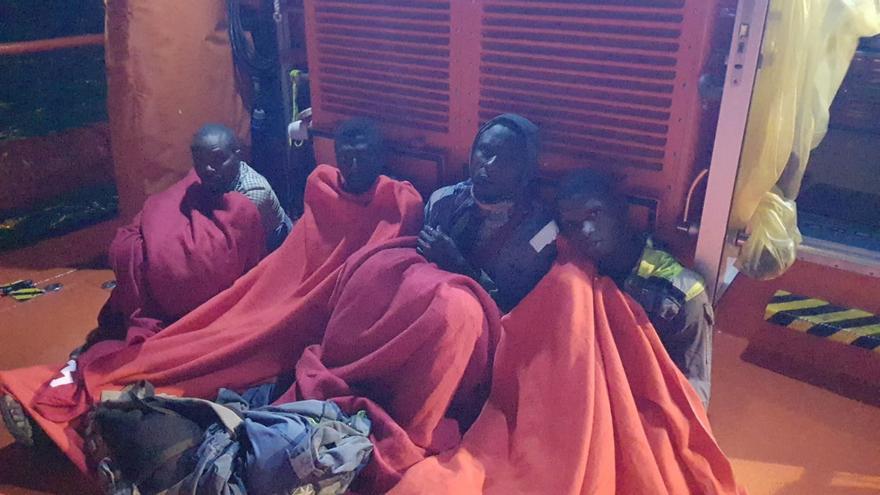 Clinging to the rudder shaft. This is how the boat “Andalusí 1”, belonging to the moorings of the Port of Malaga, found four people of Nigerian origin on the night of January 14th. The four men had been on the ship for about 10 days, according to rescuers from Salvamento Marítimo who managed to bring them to the mainland after a “dangerous maneuver” that lasted about thirty minutes.

A light from the helm of the “Marsk Cabo Verde” alerted the moorings at around 8:00 pm when they approached the merchant ship that was anchoring a few miles from the Port of Malaga. “We were going to do a service when we saw a light on the shovel of the boat and a person asking for help”, they have told from the company “Mooring Ship of the Port of Malaga” to elDiario.es. The operation, he adds, brought moments of tension while they awaited the arrival of Salvage to the area. “We were afraid that this person would fall into the water due to the bad state of the sea.”

According to Salvamento Marítimo, the ship made the route from Nigeria to the Andalusian city without stops. The migrants, as they have related to the rescuers, “tried to communicate with the ship but the hold was empty.” When they saw a ship, the boys began to send help messages to the moorings when they approached the merchant.

A rescue in extremis

Two hours later, after the boat’s warning, the rescue protocol was activated by the Salvamar Alnitak, based in Malaga, which upon arrival found four stowaways instead of one as reported by the authorities.

The rough seas and the strong west wind complicated the rescue maneuver, which had to be done from the stern to prevent the boat’s peak from colliding with the anchored merchant ship. The four survivors had to jump about three meters high to be rescued in the air by the rescue crew, according to what they have told elDiario.es, after the complex operation: “Bad weather increased the risk of falling into the water.”

The four men have been transferred to the police station, after being assisted in the Port of Malaga before midnight by the Immediate Emergency Response Team (ERIE) of the Red Cross when presenting symptoms of hypothermia. One of the stowaways was “severely hypothermic” and was taken to hospital, according to Julio Pulido, Provincial Director of the Malaga Red Cross Emergency Unit.

For its part, the Hong Kong-flagged merchant, which was anchored in the bay of Malaga since Thursday, has managed to dock at around 12 noon on January 15 to unload the merchandise from the Port of Lagos (Nigeria), from where he left on January 3, according to the VesselFinder application, and where the four men were held.

An unusual route from Nigeria

It is not the first time that this dangerous journey has occurred in Spain. On November 23, Salvamento Marítimo found three people, including a minor, hiding in the rudder blade of another merchant ship in Las Palmas de Gran Canaria that also made the route from Lagos (Nigeria) to Europe, published El País. In September 2008, a merchant ship from Ghana that docked in the port of Malaga found three people inside a container in a state of dehydration after hiding as stowaways. Another case known so far, occurred in November 2007, when four other boys clung to the rudder blade of a Nigerian tanker that was anchored off the coast of Gran Canaria.