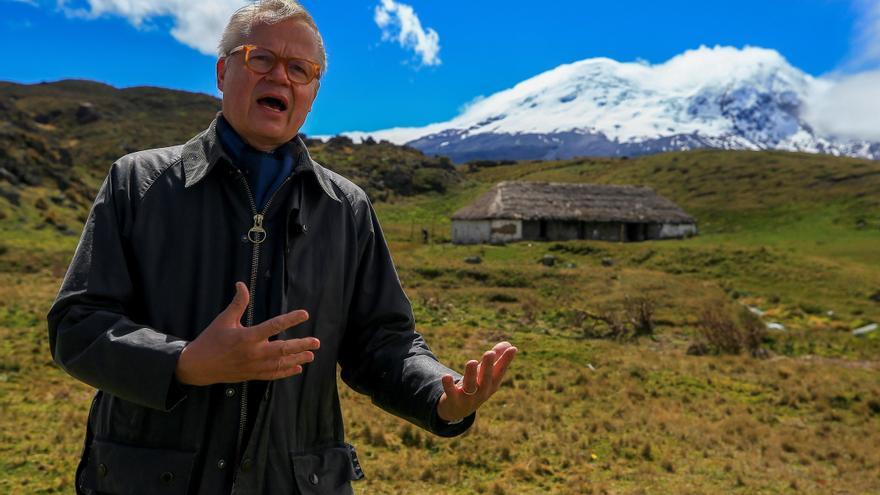 Quito, Aug 7 (EFE). Ecuador and Germany will promote the reconstruction of an old house located in the snowy Antisana, where the German scientist and naturalist Alexander von Humboldt deepened, more than 200 years ago, his studies on the need to protect nature and the danger of climate change.

Built at 3,900 meters above sea level and sheltered under the icy glaciers of Antisana, the rustic house that Humboldt inhabited at the dawn of the 19th century in the Andes of Ecuador, now lies abandoned on a blanket of grasslands, ferns and mosses, in the neighborhood of deer, wolves and Andean condors, among many other species.

Uninhabited for decades and with the trace of the times on its walls, the old house still preserves primitive elements, such as the straw that covers its roof, the volcanic stones that organize its walls and untamed woods that have withstood the fury of the wind and the humidity.

The idea is to reconstruct it without altering its essence, to maintain its history to understand under what conditions Humboldt’s genius understood that man was creating conditions for an eventual climatic alteration that would affect the harmony of nature.

“Humboldt has great importance for the science of nature”, not only because of his extensive knowledge, but because he was “popular in his time” with his messages aimed at promoting the care of nature, said the German ambassador to Ecuador, Phillip Schauer.

Schauer is precisely one of the promoters of the reconstruction of the so-called “Casa de Humboldt” in Antisana, a snow-capped volcano of 5,728 meters of altitude, which rises very close to the equinoctial line.

Although always threatened by the wind and clouds, this mountain divided into large estates in its colonial past, is now a National Park of Ecuador, protected and that holds an infinity of environmental surprises.

That is why Ambassador Schauer interpreted why Humboldt “fell in love” with this land and defended it. “He was one of the first that made us think about nature without ends, believe in nature itself” and think that actions, such as mining, for example, put it in danger, he explained.

A MUSEUM OF WATER, PÁRAMO AND CLIMATE CHANGE

For this reason, in addition, the reconstruction of the “Humboldt house” is aimed at becoming a museum, in which scientists and visitors from around the world can reconnect with the ideas of the German scientist in their habitat.

“A parallel study is being carried out for the museum,” in which elements that reflect Humboldt’s ideas must be incorporated, the ambassador mentioned, saying that, for example, extremely low-voltage electrical generation panels will be placed.

This will avoid effects with thatch on the roof, but will facilitate “keeping the environment as it was” in the past, added Schauer.

Inside will be placed explanatory panels about the work that Humboldt carried out on this earth, as well as “the importance of his thoughts, his discoveries” and the relevance of his postulates on climate change, he added.

EL ANTISANA: A REFUGE OF LIFE FOR THE CAPITAL OF ECUADOR

“La casa de Humboldt” is located in an area on the slopes of Antisana cataloged as a “Hydrological Reserve”, administered by the Municipal Public Company of Potable Water and Sanitation (Epmaps), of Quito, which shares the reconstruction project.

And it is that vital hydrological systems for Quito also coexist there, such as the La Mica lagoon, which supplies water to much of the south of the capital located about 50 kilometers west of the mountain.

A catchment plant collects water from the lagoon in a regulated manner on a daily basis and directs it to a treatment plant through channels and special pipes.

The melting of Antisana and the wetlands (large natural pockets of water covered with vegetation) feed the La Mica reservoir.

The process is neat and done with excessive care, since the municipal company knows that the water it uses is a contribution that nature provides for the benefit of citizens.

For this reason, Epmaps firmly manages the “Hydrological Reserve” and its natural environment, protected with minimal human intervention.

This management has reached such a point of care that, thanks also to the contribution of the Water Protection Foundation (Fonag), projects have been undertaken to take care of the fragile ecosystems of the area.

For this reason, Fonag collaborates with the care and preservation of Andean condors, spectacled bears, pumas and other species typical of the area, essential in this ecological reservoir in the Andes. EFE