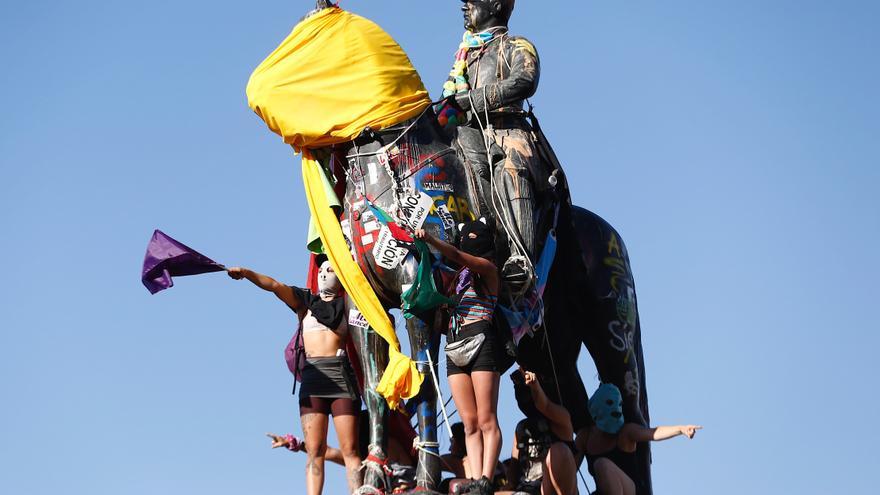 Santiago de Chile, Mar 12 (EFE) .- The statue of General Manuel Baquedano, located at the epicenter of the protests in Chile, Plaza Italia, and which has been the object of numerous attacks, was removed at dawn this Friday to its restoration.

The removal of the monument was decided last Wednesday by the National Monuments Council (CMN) as a temporary measure that aims to restore the carving to avoid the structural risk posed by the sculpture after the damage suffered.

Dozens of people participated in the operation to remove the stature, which was honored with military honors, guarded by a police contingent.

The sculpture was lifted by a crane and placed on a truck, which proceeded to its transfer. Once repaired, the authorities' commitment is for the monument to return to its place in the country's capital.

"It has been possible to remove the entire piece and it is now going to an enclosure to be restored. It will be recovered because it is badly damaged, and it will be restored in this place," the undersecretary of Cultural Heritage, Emilio, told the press. de la Cerda.

The statue, built in bronze and which has presided over the square since 1928, honors Manuel Baquedano González (1826-1897), a Chilean military and politician, who was provisional president of the country between August 29 and 31, 1891 and commander in Chief of the Army during the War of the Pacific (1879-1884), which pitted Chile against Bolivia and Peru.

At the base of the monument lie the remains of the "Unknown Soldier of the Fatherland", found on the battlefield.

Since the beginning of the social outbreak in the country, on October 18, 2019, the carving has been used by the protesters as a canvas to capture various claims with paintings and graffiti.

A week ago, a group of protesters placed tires on the base of the monument and set them on fire, covering the statue in flames, and during the March 8 march for Women's Day, the statue suffered a new attack and a group of hooded men tried to bring her down.

The wave of protests in Chile against inequality and demands for socioeconomic reforms left some thirty dead and thousands injured, in addition to allegations of human rights violations against the security forces.

In order to decompress the street mobilizations, the political parties agreed to hold a plebiscite on a new Constitution, which took place on October 25 and in which almost 80% of the population approved to change the Magna Carta inherited from Pinochet. .