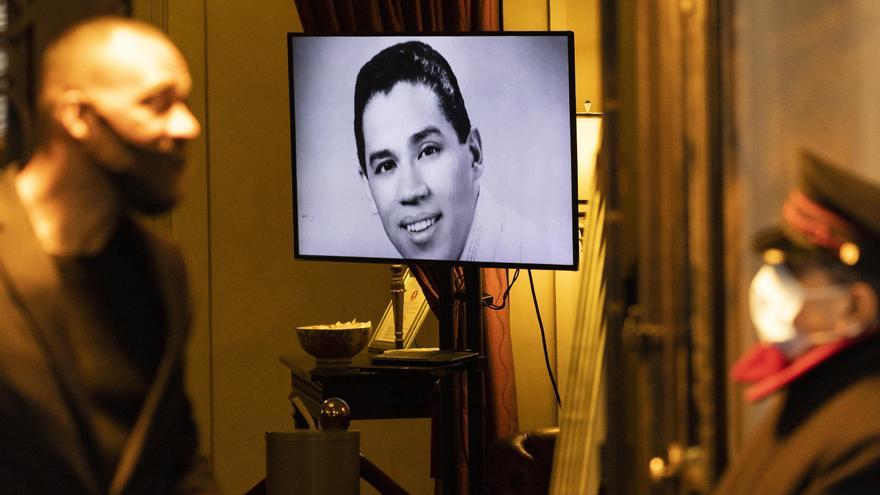 New York, Feb 23 (EFE) .- Family, friends and admirers of salsa said goodbye this Tuesday to the recently deceased Dominican musician Johnny Pacheco, one of the main responsible for having made the world dance with a genre that was born in the streets Latinas from New York.

Pacheco, who founded the Fania label together with the lawyer Jerry Masucci, who revolutionized Latin music, died on February 15 of pneumonia and this Tuesday his remains were veiled at the Frank E. Campbell funeral home, where Celia Cruz was also exposed, the “queen of salsa”, another famous member of that record company, who was born in 1964.

Also known as “father of salsa”, he was remembered this Tuesday both for his musical legacy as co-founder of the famous and legendary Fania Stars, and for his humility during the musician’s wake in Manhattan, where the music he led was played. to everyone, there were photos of the artist and a video showing Fania concerts.

His wife Cuqui Pacheco recalled that the artist’s last moments were “very calm.”

“I had the joy of being with him, and talking to him, and kissing him; asking him not to leave my side, to take care of me, to guide me in all this and to let me know what he wanted, and I think everything It has been very nice, “he said.

He assured that he will remember him “laughing because he always made jokes, he was always happy, always with music.”

“He was a father to us,” conga player Eddie Montalvo, a former member of the Fania Stars, who referred to Pacheco as an “icon”, told EFE.

“He was a man who brought good music, always well dressed, always making people enjoy themselves,” said the well-known musician, who recalled that before joining the Fania he had played with Pacheco’s band and with Héctor Lavoe, then a member from the legendary ensemble.

In 1979 Pacheco – who was born in the city of Santiago, Dominican Republic as Juan Zacarías Pacheco Knnipping – proposed to join the group “and I was scared because it was about replacing Ray Barreto (1929-2006),” said the conguero, who was with Fania from then until its end, which he remembers as a family, always under the baton of Pacheco, also a flutist, composer and producer.

“These are times that will live in my heart,” said the musician, who was also a member of the Son del solar, a group that accompanied Rubén Blades – another Fania star – for several years.

Admirers such as Iris Peña, 71, who says she did not miss a Fania dance, also came to say their last goodbye to maestro Pacheco, whom she remembers liked to talk with the public.

From those conversations, Peña does not forget that his compatriot “liked jalao very much,” a coconut and honey sweet typical of his country.

Also present was the Colombian José Mejía, who proudly pointed out that Barranquilleros like him “are very salty.”

“I have always liked salsa, since I can remember, and Johnny Pacheco was one of my idols. He left a very important legacy, a great example for the young salt shakers. Many singers like Celia Cruz and Héctor passed through him. Lavoe, Bobby Cruz; countless singers who are a very important legacy for salsa, “he said.

The also musician Raúl Acosta, from the Oro Sólido group, stressed for his part that many artists “owe their careers to Pacheco, who was an example both on stage and off stage, as well as in his family and businessman.

“He leaves a great legacy that will last. We hope that many young people will follow that great example,” he added.

Andrés van det Horst, producer of the documentary on the history of salsa entitled “Yo soy la salsa”, reminds him as “a person without egos, that what he wanted to do was music, transcend with his art and an extraordinary human being”.

Tomorrow there will be a mass for Pacheco in the Latin Quarter of Harlem, where salsa was born, and the musician will be buried in the Woodlawn Cemetery in the Bronx, where Celia Cruz and her husband, trumpeter Pedro Knight, also rest.

And following the guidelines of the musician remembered for his good humor, on his grave he will say: “Here is Johnny Pacheco against his will.”