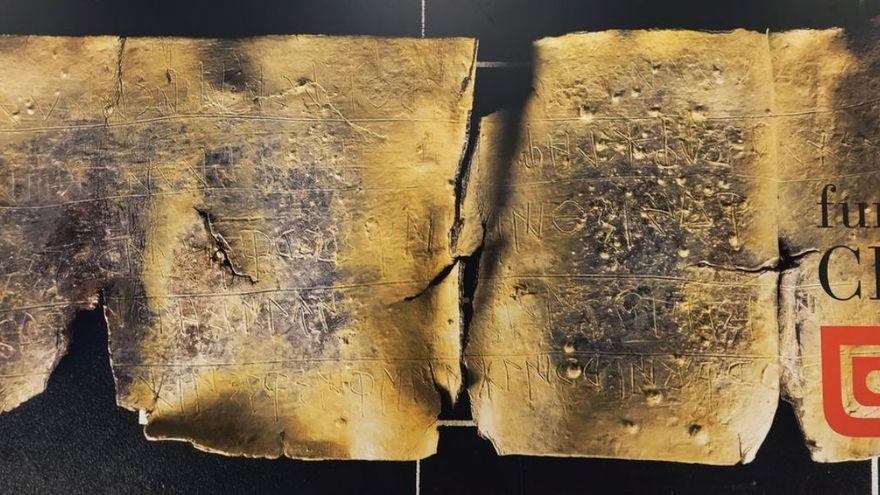 Jávea and the Marina Alta have entered in a big way in the exciting history of the enigmatic Iberian writing. An exceptional piece has now come to light. It is a lead dated between the 4th and 3rd centuries BC. C. Contains no less than 200 signs. The clerk recorded them with precision. The lead is unfolded in four sheets. “It is a magnificent piece”, assures Joan Ferrer i Jané, specialist in paleohispanic epigraphy at the University of Barcelona.

Iberian writing can be read phonetically (the pronunciation was deciphered in 1922 by the researcher Manuel Gómez-Moreno), but the meaning is a nebula.

This Iberian lead it has been recovered by the Fundació Cirne de Javea. Its president, Enric Martínez, is cautious and reveals what is strictly necessary: ​​”It came to us from an anonymous donation and it belongs to the Marina Alta, but I can’t say more.”

The foundation watches over the cultural heritage. Three years ago, right off the bat, “fate” (to call it somehow) put the amazing piece in his hands. Cirne and the Museum of Xàbia contacted the main experts. The first thing was to check its authenticity. The Valencian Institute of Conservation, Restoration and Research (IVCR + i) and the specialists of the Littera group of the University of Barcelona (integrated, in addition to Joan Ferrer i Jané, by Noemí Moncunill, Víctor Sabaté and Javier Velaza), accredited that it was an Iberian lead with all of the law. In addition, it is among the 30 or 40 best preserved and among the 15 with a longer text.

“Any museum would raffle off a piece as valuable as this one,” says the epigraphy expert.

The lead was presented on Friday at the headquarters of the Fundació Cirne. Ferrer i Jané explained that his incised writing belongs to the dual northeastern variant. He stated that “epigraphically” it can be located in the Edetana (Llíria) or contestana area, a territory that embraced the current province of Alicante and part of those of Valencia, Murcia and Albacete.

The expert warned that in the fields Iberian leads are not usually discovered anymore. The poachers have gone ahead and plundered them. Once recovered, it is difficult to place them chronologically and geographically.

The rescued in Jávea presents complex signs and hence it dates back to an ancient moment in Iberian writing, which over time would be simplified.

The expert has transcribed all the signs and is able to read the text. Unraveling its meaning is another story. “60% of what we can understand are proper names,” he said.

It has also detected twists that were used to give testimony, which could lead to interpret that it is a commercial document. However, Ferrer and Jané discard this hypothesis in principle and intuit that these 200 signs are related to worship and religion.

The arrangement of the writing is very curious. The lines are marked. Signs in the upper half appear face up and those in the lower half face down. It works like a mirror, as if two people were writing face to face on the same sheets.

The lead was originally folded like a book. But the poacher who took it from a field opened it and broke the four “leaves”. However, the piece has been very well preserved. Metal, ideal for its ductility for incised writing, has lost its elasticity over time.