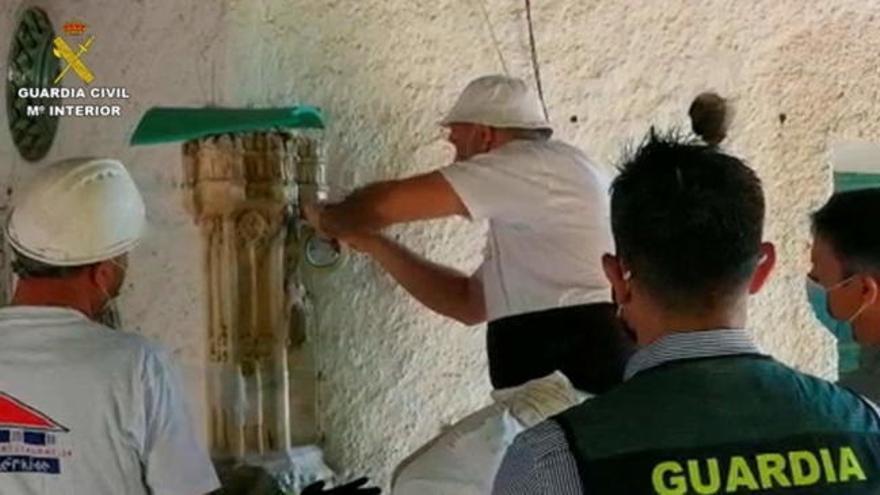 The Civil Guard has recovered an alabaster tower that forms one of the reliefs of the sepulcher of the archbishop of Toledo Alonso Carrillo de Acuña of the Cathedral of Alcalá de Henares (Madrid), more than five centuries old, which had been missing since the civil war, reports this Body.

The discovery occurred on an agricultural farm in the Madrid town of Chichón thanks to a call from a citizen who recognized the relief of one of the four crenellated towers that make up each of the corners of the sepulcher.

The piece, which is attributed to the maestro Sebastián de Toledo, It was made between 1482 and 1489 for the church of the convent of Santa María de Jesús in Alcalá de Henares and after its discovery it has been deposited in the offices of the Diocese of Alcalá de Henares.

It was transferred in the 19th century to the Magisterial Church of Alcalá de Henares and in 1936 it was destroyed in the first days of the Civil War.

The piece presents a vegetal decoration, tracery and Gothic letters, which are part of an inscription that runs along the entire upper band of the tomb.

A citizen was the one who alerted the Bishopric of Alcalá de Henares of having located this part of the tomb as a result of the broadcast of a television program in which they were compiled some police operations related to historical heritage.

It was in a chapter of a series where they talked about the Temperance operation, developed by the Historical Heritage Section of the Civil Guard’s Central Operative Unit in 2017 and which culminated in the location and recovery of the reliefs of La Temperance and La Prudencia from this same tomb.

According to the testimony of this man, the piece was embedded halfway up in the corner of the facade in the aforementioned agricultural estate, acquired by some of his acquaintances several years ago, and whose property is now in the hands of the Montemadrid Foundation.

After making a first visit to the farm at the end of August, the agents identified without any doubt that the alabaster relief was one of the corners of Archbishop Carrillo’s tomb, which was considered lost or destroyed in 1936.

The researchers contacted the heads of the Montemadrid Foundation, owner of the farm, who were unaware that this fragment was found in that place, that has been assigned to the Community of Madrid for more than thirty years and is used as a center for social services.

Given the lack of security and protection in which the piece was located, although it probably have been there for more than 40 years, the Civil Guard got in touch with the institutions involved in its recovery.

The administration arranged all the permits, human and material resources to carry out the recovery of the work This made it possible to extract the piece from the wall with the means provided by the Diocese of Alcalá.

The supervision of these works was carried out by a conservator-restorer specialist in stone materials from the Institute of Cultural Heritage of Spain (IPCE) and had the authorization of the Montemadrid Foundation.

The relief, now on deposit, will be integrated into the tomb in the future, after the restoration work is completed.

Cinemas before the abyss – La Provincia