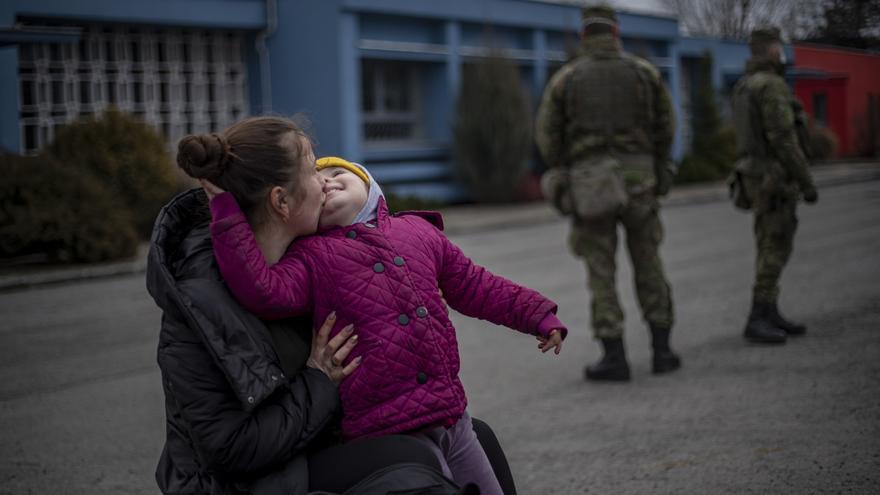 The Together for Life Foundation and the consulate of Ukraine are working on organizing the evacuation of Ukrainian children and some adults to Valencia through Poland. As explained today by the NGO in a statement, this operation has with the support of the Generalitat and, in principle, it foresees the displacement to the Valencian Community of 560 people who try to flee the war for the Russian invasion.

The same sources indicate that the refugees are expected to may arrive next weekAlthough there is no specific date yet. "The situation in Ukraine is getting worse every day and that is why they want to evacuate as soon as possible," they stress.

The president of the Fundación Juntos por la vida de la Comunidad Valenciana, Clara Arnal, plans to travel next Tuesday to Poland to organize from there the arrival of the evacuees from the Ukraine, and the trip on the planes to Valencia.

Evacuees are expected to be displaced by road by buses from Ukraine to the border with Polandand from there on three charter flights will move to Valencia. It would be an air corridor, for which the complete planes are being managed with different companies. It will not be from an airport near the border because their airspace is already occupied, so the flights will depart from an airport in Krakow.

"One of the girls who is waiting to be evacuated has sent a message this morning to her host family in Valencia, in which she explains, in a frightened voice, that her town is on fire, the houses are burning, and they are She is Veronica Kaminska and lives in Sukachi, about 3 km from Ivankiev," the foundation said in its statement.

The NGO, together with the Ukrainian counterpart, is organizing in that country the grouping and displacement of children and adults from the Chernobyl and Donbas zone in buses, although communication problems make the tasks difficult. Also the problems on the roads are delaying the organization of the evacuation.

In their meeting last Friday, the honorary consul of Ukraine in Valencia, Pablo Gil, presented the proposal to welcome refugee minors to the president of the Generalitat, Ximo Puig, who offered him "all the humanitarian aid". The consul has thanked the solidarity and support shown by Puig.

Both the consulate and the Foundation are also working on the preparation of the necessary documentation for the transfer of the evacuees. The NGO is already creating the list of minors to be evacuated, and is collaborating with other foster care associations.

The boys and girls who will arrive are from the areas of Chernobyl and Donbass and they will be welcomed by Valencian families who collaborate in the humanitarian foster care programs during the summers, carried out by the Together for Life Foundation for 20 years.

The Foundation appreciates the solidarity of all the families that have offered to welcome the minors who will arrive in Valencia. There are already enough, so no more host families are needed.

According to Clara Arnal, president of the Foundation, "the boys and girls are suffering the horrors of the conflict, they have to take refuge in basements, and there is a shortage of everything. With their evacuation to Valencia, the minors will be able to rest from the war, and from the fear who are suffering every day from the bombs that fall near their homes".