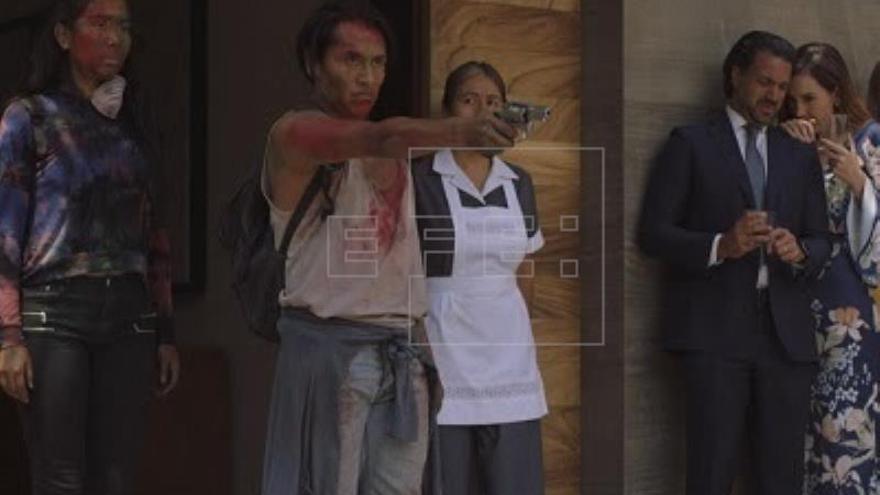 Madrid, Feb 18 (EFE) .- The pandemic continues to cause meager lists of premieres in theaters, although, fortunately, the new titles respond to the most varied tastes; a dystopia about inequality, a septuagenarian lesbian love story, cinema about theater and the drama of two mothers of the same daughter.

MEXICAN MICHEL FRANCO WARNS OF A “NEW ORDER” TO ARRIVE

The film, awarded at the last edition of the Venice Film Festival and nominated for Best Latin American Film at the Goya Awards, is a dystopia that occurs in Mexico City, in the not too distant future, when a violent social revolt reaches the gates of the impressive chalet where a high-class family celebrates their daughter’s wedding.

Directed by the Mexican Michel Franco, the film is told from eight points of view and counts in its main roles with Darío Yazbek (Julián de la Mora in “The house of flowers”), Samantha Yazareth Anaya, Patricia Bernal and Diego Boneta, young Mexican actors famous for their television roles.

“BETWEEN US”, LOVE BETWEEN SEPTUAGENARIES ABOVE ALL

“Between us”, the film chosen by France to send to the fight for the Oscar, is an atypical drama about the love of two women who reach 70 years planning their happiness.

Filippo Meneghetti, a newcomer director born in Italy, but living in France for years, turns this tremendous love story that they both have secretly into the magnificent performances of Barbara Sukowa and Martine Chevallier, which is suddenly interrupted by a terrible event.

Cordovan filmmaker Francisco “Chico” Sánchez, author of around twenty short films and director for four years at the Córdoba Film School, makes his debut in directing feature films with “Godot”, a meta-theater piece of which he is also a scriptwriter and producer in which he plays his own play “El grito”.

In the film, a theater company made up of actors and technicians who do not know each other has a strange task: to mount “El Grito”, a play of the absurd, in a remote setting; but soon a series of rules show that nothing is what it seems.

A MOTHER LOSES HER ADOPTIVE DAUGHTER IN “14 DAYS, 12 NIGHTS”

A year after her teenage adopted daughter dies in a traffic accident Isabelle, still shocked by the experience, returns to the Vietnamese orphanage where she found her with the hope of reconnecting emotionally with her through her land and, if she succeeds. , meeting her biological mother.

Jean-Philippe Duval directs this drama, which is scripted by Marie Vien, starring Anne Dorval, the muse of famed director Xavier Dolan, who was selected by Canada to be nominated for the Oscars for best international film.

Filmin premieres this Friday, February 26, exclusively in Spain, the film “The Assistant”, the fictional debut of the Australian documentary filmmaker Kitty Green (“Casting JonBenet”), which was presented in the Official Selection of the Sundance Festival , and that has been elevated by American critics as one of the best films of 2020.

The film, starring Julia Garner (“Ozark,” “The Americans”), is inspired by the Weinstein case and explores the sewers of Hollywood through the portrait of Jane, the young and discreet assistant to a major producer who is face with the prevailing machismo as soon as you enter the industry.

THE RECOGNIZED DOCUMENTARY “FOR SAMA”, FROM SUNDAY IN MOVISTAR +

The Syrian journalist Waad Al-Kateab, who for five years recorded the destruction of Aleppo, the siege and the constant bombardments by the army, signs “Para Sama”, a documentary that has gone around the world and that its author defends as a denunciation explicitly against Bashar Al-Asad.

Narrated in the first person by herself, the documentary, which was nominated for the Oscars, dates back to the moments before the war in Syria when the journalist and her doctor friend Hamza do community work and prepare to overthrow the regime of Syria. Asad. Both study at the modern university in Aleppo and are part of the protests against the dictatorship in the Arab Spring of 2011.

“FALLEN FROM THE SKY”, DENNIS HOPPER’S DAMN MOVIE, ON TCM

TCM broadcasts exclusively this Friday at ten o’clock at night the restored copy of “Fallen from the sky” (“Out of the Blue”), Dennis Hopper’s cursed film, which tells the story of a young woman who lives in a small town and is fascinated by Johnny Rotten, frontman of The Sex Pistols, the London punk group.

His father, played by Hopper, is an ex-fighter and his mother, a drug addict; both take all their anger and frustration on their daughter. The film has been considered one of the 15 best films of the 1980s. EFE