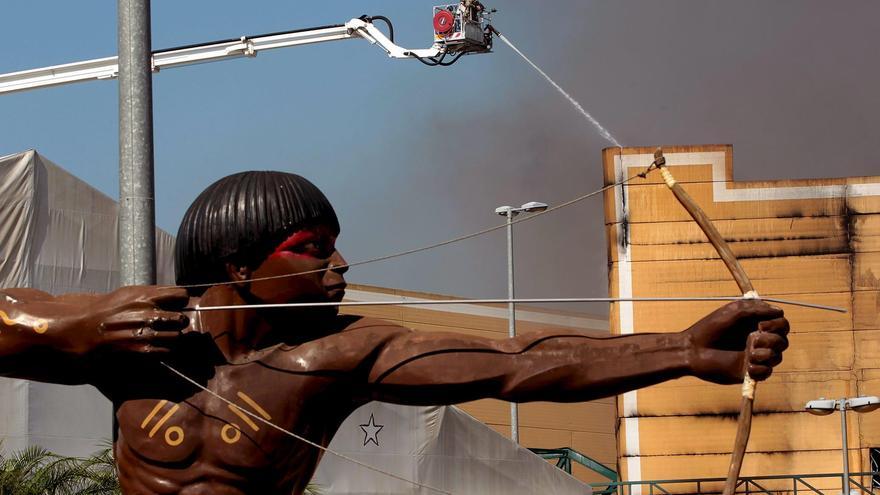 Rio de Janeiro, Jan 11 (EFE) .- A Rio de Janeiro judge ordered this Monday the closure of the City of Samba, the complex in which the samba schools of this Brazilian city make costumes, allegories and floats for their famous Carnival parades, due to the risk of fires in the facility.

The decision, granted at the request of the Public Ministry, sows even more doubts about the celebration of the Rio de Janeiro Carnival this year, initially scheduled for February but which is on hold due to the covid-19 pandemic, as the schools themselves warned that will only parade when the vaccination process against the disease is advanced.

According to the ruling, published by the Rio de Janeiro Public Ministry on its website, the City of Samba will have to remain closed “until the facilities are reformed to minimize fire risks.”

The judicial decision took place within the framework of a complaint that the Attorney General’s Office filed against the municipality of Rio de Janeiro, the municipal company for the promotion of tourism Riotur and the Independent League of Samba Schools, which are responsible for the management of the complex .

The complaint “highlights that different inspections carried out by the Fire Department in different years identified not only irregularities in the state of the facilities as well as the absence of a fire prevention and control plan,” the Public Ministry explained in its statement.

The entity added that the enormous documentation attached in the process demonstrates the non-compliance with the determinations made by the Public Ministry for the implementation of a fire control plan in the City of Samba.

SITUATION PUTS HUNDREDS OF WORKERS AND VISITORS AT RISK

A possible delay in a measure to correct the situation “will prolong the risk situation to which not only the workers are exposed, but also all the people who frequent the place,” according to the ruling.

The City of Samba has been the scene of different fires since its inauguration in 2006 because samba schools tend to store a lot of combustible material in their warehouses, such as wood, fabrics and plastics.

The last of the fires was registered in April last year in the pavilion that belongs to the Viradouro samba school and caused significant material damage but left no victims.

The most serious case was registered in 2011 when four of the 14 pavilions of the complex were destroyed by a huge fire.

The closure of the City of Samba may further delay the work carried out by samba schools to mount their parades for this year’s Carnival, initially postponed to July 10 and 11.

In September 2020, the schools put Carnival on hold, the most important festive event in Brazil and one of the most famous in the world, by canceling the parades that were scheduled for February due to the pandemic and raising the possibility of postponing them or cancel them definitively.

But at a meeting in November, the Carnival protagonists expressed their support for the proposal to hold the parades in the first half of July, since there is already a vaccine against the pandemic and the immunization process is advanced.

The initial postponement received the support of the Rio Mayor’s Office, the main organizer of a party that in February 2020 attracted 2.1 million visitors, of which 483,000 were foreigners, who left an income of $ 900 million and confirmed to the city ​​as the main tourist destination in Brazil.