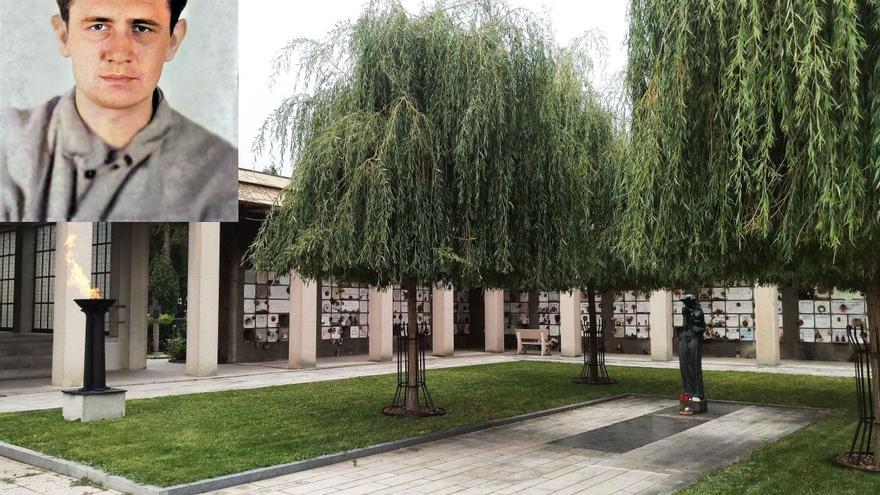 Prague, April 1945. It gets dark in the civil crematorium in Strašnice. Its administrator, František Suchý, stares in horror at the shipment of bodies that the German soldiers have just brought in. The bodies come from Hradischko, a small sub-camp under the Nazi concentration camp of Flossenbürg. All of them are prisoners, murdered in the last hours by members of the SS. Hradischko never had his own crematorium. Until the end of March, those responsible for them disposed of the corpses, transporting them, for more than 200 kilometers, to the Flossenbürg furnaces, where they were cremated. Everything changed when road and rail communications between the two precincts were cut off due to the final offensive of the Allied and Soviet troops. Despite the impending and inevitable defeat, the SS officers leading Hradischko stepped up the pace of their crimes and decided to dispose of the bodies of their victims at the nearby crematorium in the Czech capital.

Overnight Suchý was immersed in this macabre operation. The Nazis ordered him to burn the starving corpses always on the third shift of the night and then dispose of their ashes. When the time came and the bodies of dozens of prisoners began to file past him, including fellow Czechs and deportees of other nationalities, Suchý decided to disobey. He took a pencil and paper and began to make a list of the names of the deceased prisoners. After each cremation, he deposited the ashes in separate urns to which he assigned a number that corresponded to one of the names on the list. Meanwhile, her son made a copy by hand for a backup duplicate. Finally, he hid the containers in a remote part of the cemetery. He knew that not only his life was at stake, but also that of his son and the rest of the family, but he felt comforted by treating all those victims of Nazi barbarism with respect and humanity. Would it do any good? It served a lot.

A year and a month later, in May 1946, the jars with the ashes came out of their hiding place and were buried, with all honors, in a privileged place in the crematorium where a memorial would be erected. The event was attended by the main authorities of communist Czechoslovakia, starting with the President of the Republic. There was a concert, a military parade and emotional speeches. Unlike what happened to millions of men, women and children exterminated in the Nazi camps, the ashes of those who had been cremated in Prague had a name and a place of honor in which to rest. Six of those names were Spanish.

This incredible story, most likely, would never have been known in our country had it not been for the tireless work of three researchers: Unai Eguia, Antón Gandarias and Antonio Medina. “It all started because I decided to investigate the life of Enric Moner, a Catalan assassinated by the Nazis in Flossenbürg,” Eguia recalls. “On my way, I was lucky to meet Antón and Antonio, who were Ángel Lekuona’s nephew and grandson, respectively. and Antonio Medina, two Spanish deportees exterminated in Hradischko. The three of us wanted to know more about that compound and about the fate of its prisoners, so we got down to work. From the first moment we formed a great team. ”

Among the three, they consulted files and diverse bibliography, obtaining the first results: documents, photographs, direct and indirect testimonies. “The thread that allowed us to reach the ashes was very close to us,” says Eguia, “in a letter that the mother of Antón Gandarias, Ángel Lekuona’s sister, had treasured”. It was about the letter the family received in 1945. In it, an unknown person who signed the name Gregorio Uranga introduced himself as Ángel’s companion in captivity and transmitted the worst news: “We have suffered the occupation of the Germans, who like You know they have committed horrific crimes, one of the victims being their son. ” Gregorio also gave the information that would change everything: “he was cremated in Prague.” Eguia, Medina and Gandarias investigated what happened in that crematorium and found the story of František Suchý. The question that remained to be answered was obvious: would there be Spaniards on your list?

“We do not have enough words to thank the support we have received from the Czech Republic,” says Eguia. “We spoke with their embassy in Madrid and they made themselves available to us. They appointed a fellow researcher to help us from Prague. It was incredible.” Finally, the head of the prison archives, Aleš Kýr, and the head of the Prague cemeteries, Julius Mlčoch, gave them the news they were waiting for: “there are six Spaniards on the list.” Shortly afterwards they were sent a copy of the original list that Suchý’s son kept until his death and which provided all the data: Henri Mone (Enric Moner), died on 9.4.1945, cremated on 04.10.1945, urn number 62557; Pedro Raga, Ángel Lekuona, Antonio Medina and Rafael Moya appeared with the same death and cremation date as Moner in the polls 62558, 62559, 62560 and 62563, respectively; Vicente Vila Cuenca was registered as deceased on 04/19/1945, cremated on 04/23/1945 and urn number 62752.

The news reached Spain 75 years late and not thanks to the work of the institutions but to the initiative of three disinterested researchers. A very different reality from that of the surrounding countries. “In 1946, France sent a repatriation commission that collected all the ballot boxes containing the ashes of their compatriots. In total they took 70 and gave them to their families,” says Eguia. Franco’s Spain, Hitler’s ally until his final defeat, not only ignored but tried to hide the history of the more than 9,300 Spanish men and women deported to Nazi concentration camps. After the death of the dictator there were not many changes in this strategy and only in recent years have democratic institutions begun to take some steps to recognize these victims of Nazism.

“Our greatest consolation,” says Eguia, “is that during these decades in which they have been forgotten here, in Prague they have been able to rest in a dignified place where they have been constantly paid tribute. They have been more fortunate than the rest of their compatriots. deported “. Eguia, Medina and Gandarias are now trying to find out if it is possible to exhume the vessels and recover, in this way, the ashes of the six of Hradischko. “We fear that the containers may be totally destroyed, so we must be very cautious and make the decision in agreement with the Czech authorities. We are not very optimistic, but we will try.”

Paradoxically, as happened with the history of these Spaniards, the feat carried out by František Suchý and his son was also premeditatedly buried in their homeland. The reason is especially dramatic. The communist regime replicated in the Prague crematorium the strategy that the Nazis had implemented. This time it was the Czech police who began to take away the bodies of political dissidents and ordered Suchý to burn the bodies and make their ashes disappear. The person in charge of the crematorium had no choice but to disobey again. On this occasion, father and son ended up being arrested and serving a long prison sentence.

The investigation carried out by Eguia, Medina and Gandarias has also served to reveal what happened in one of the lesser-known concentration camps of the Third Reich. At least 40 Spaniards arrived in Hradischko in March 1944, coming from the “mother camp”, Flossenbürg. They were true heroes who had fought in the anti-Nazi Resistance. They paid dearly for that bravery. Only a quarter of them would survive in this hell. Alfred Kus, commander of Hradischko, and Erwin Lange, the SS-Sturmbannführer who commanded the garrison, were real criminals. The living conditions of the prisoners were unbearable. They worked from sunrise to sunset, with hardly any food and subjected to all kinds of harassment and torture. Lange’s cruelty was especially evident on April 9, 10 and 11. At least 50 prisoners were shot to death while being driven to work. Among them were five of the Spanish deportees whose ashes have now been located.

The drama of Hradischko’s captives did not end there. The proximity of the Soviet troops made Lange order to eliminate all the prisoners who were in the infirmary of the field. The mission was entrusted to a German common prisoner who dedicated himself to giving his companions, one by one, injections of ethanol. The SS-Sturmbannführer later rounded up the rest of the captives and organized their evacuation in a death march on foot and in cattle cars that claimed the lives of at least 100 other men. After a hellish journey that lasted for two weeks, the train carrying the survivors was intercepted by a command of Czech partisans who freed the prisoners.

“In a few weeks we will know whether or not the vessels with the ashes of these six Spanish heroes can be recovered,” says Eguia, “but although we cannot do it, we already have a place to remember and honor them.” Gandarias, Medina and Eguia have already contacted the Spanish embassy in Prague to report all their progress. All three trust that the diplomatic delegation will attend, every year, the commemorative events that are held every May 8 at the crematorium in the Czech capital. “It is the least our state can do to honor the memory of these forgotten heroes.”