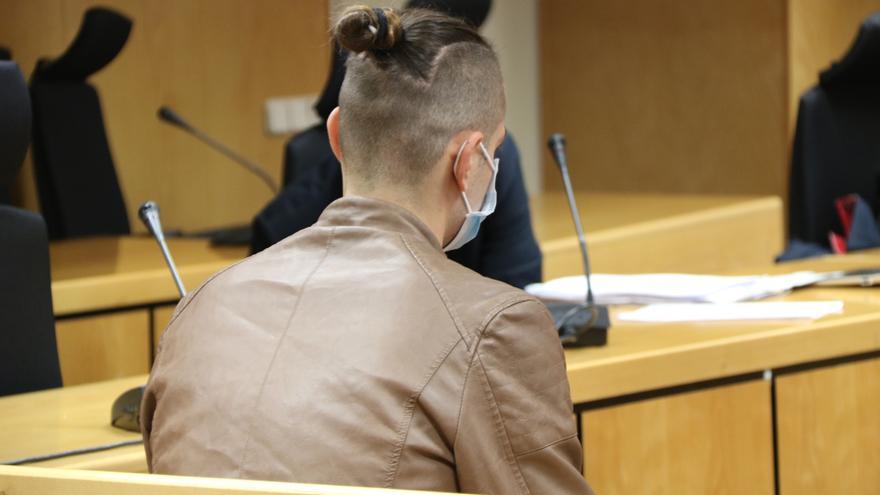 Dani Gallardo, the 23-year-old man imprisoned for more than a year for his alleged participation in the riots in Madrid against the judgment of the procés, has denied this Friday in court that he attacked the agents and has disassociated himself from the altercations. In his statement before the court, Gallardo explained that the agents were beating his partner –and also accused– Elsa V. and that he tried to protect her with his body. "I preferred that they hit me than her," he said, reports the agency ACN.

Gallardo is the only defendant for the riots after the judgment of the procés who is still in preventive prison for some events that occurred in Madrid and not in Cataunya, where more than 200 people were arrested for the week of altercations. Before the judges Gallardo has denied that he used a stick to hit the agents, as the Prosecutor's Office maintains, which asks for six years in prison. To questions from the Prosecutor's Office, Gallardo has denied that he participated both in the concentration in favor of the procés prisoners in Madrid and in the riots that took place in Plaza Santa Ana.

Her friend Elsa V., for whom the Prosecutor's Office is asking for two years in prison, has also denied that both participated in the concentration or in the riots, and pointed out that they were both having a few beers when the incidents occurred. According to Elsa V., both ran "out of fear" when riot police charged the protesters, but she had an anxiety attack, which allowed a policeman to catch up with her and hit her with the baton. The two defendants have denied that Gallardo took a stick and attacked the agent who was trying to arrest the young woman. They have also refused to let him go through containers or throw objects at the police.

On the contrary, the police officers who have testified have endorsed the accusatory account of the Prosecutor's Office and have explained that Gallardo attacked an agent "with a stake with nails", which they have described as "a brutal blow." "If he does not wear a helmet, he kills him," said an agent who has claimed to have witnessed the events.

The third defendant, Mariano JH, has also declared in the trial, for whom the Prosecutor's Office is asking for two years in prison for an attack on authority. The young man has denied that he participated in the demonstration of October 16, 2019 or that he had any role in the riots, and has pointed out that he threw an object at two agents who were in plain clothes because he thought they were going to attack him.

According to the prosecutor's account, Gallardo participated in a demonstration in the Plaza Canalejas in Madrid along with a group of 80 people "carrying sticks and paving stones" and who "caused damage to street furniture and attacked other pedestrians." Riot control agents who had been deployed for the rally chased them to Plaza Santa Ana but some members of the group "barricaded containers and tried to set them on fire."

While one of the agents tried to detain the young woman, continues the Prosecutor's Office, Gallardo "hit him from behind and violently with a wooden stick about 90 cm long and 7 wide with six nails that pierced it." The Public Ministry also asks that Gallardo and his partner compensate the Madrid City Council with 3,524.67 euros for the damage to urban furniture, and 2,100 euros to the agent who was retaining his partner.

At the gates of the Provincial Court of Madrid, around twenty members of the Madrid antirepressant movement have gathered and the spokesperson for JxCat Congress, Laura Borràs, the deputies of ERC Carolina Telechea and Montserrat Bassa, and members of the CUP have also attended. , who have expressed their solidarity with what they consider a new example of the "repression" of the State to the protests by the sentence.