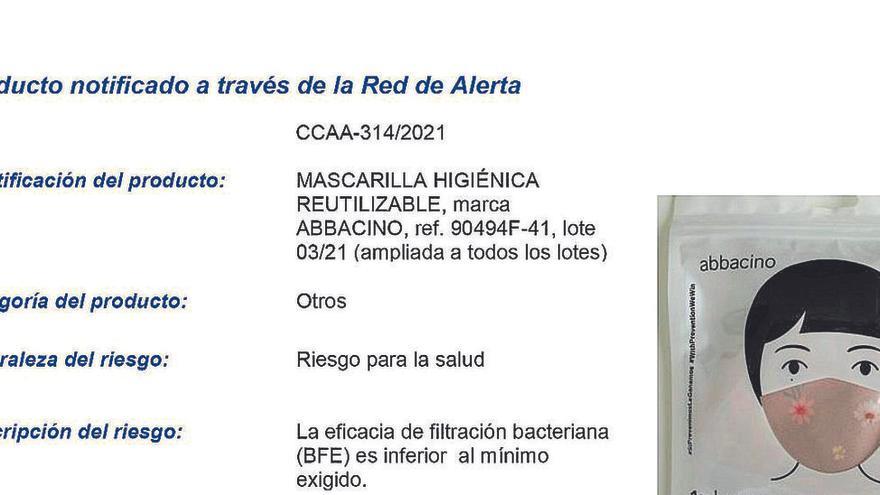 The Government of the Balearic Islands has incorporated into the Alert Network of the Ministry of Consumption six models of hygienic masks, thus avoiding its commercialization in the whole of the European Union, because the protection they offer against coronavirus is much lower than required by law. The company most affected by this decision is precisely the Mallorcan company Seyma Importació, which markets the Abbacino brand, to which some 78,000 "hygienic masks" have been immobilized for the aforementioned reason, when the Autonomous Executive verified that in two of its models the protection they offered to those who wore them didn't even reach 50%, when the regulations require that it reaches 90%.

The General Director of Consumption of the Government, Félix Alonso, defends this action, recalling that the marketing of protection systems against covid that in reality do not cover this function adequately, acquires a very special importance in the face of a virus that has led to numerous deaths, and to a greater extent in the face of a strain such as omicron, which is especially contagious. In this regard, remember that a deficiency in this matter endangers not only to the user of this product, but also to all the close contacts he maintains.

The General Directorate of Consumption has been carrying out controls on the quality and labeling of masks since the pandemic began, which led to the immobilization of 2.2 million units during 2020, to which almost 167,000 more have been added throughout 2021.

In many of these cases, the deficiencies have been framed in labeling failures, but there are also those in which, after analyzing this product, it has been detected that the level of protection they offer is clearly lower than that required for the type of masks offered.

Within the framework of these controls, during the past year the marketing in the Balearic Islands of masks that did not provide sufficient protection to the wearer of the marks Abbacino, Jiji, Xula and Castelltort. But it is the first, by far, the one that registers the largest volume of immobilized units.

The analysis commissioned by the Government resulted in the protection offered by the two Abbacino models included in the Alert Network was 49.4% and 47.8% respectively, far from 90% that is required to market one of these products under the definition of "hygienic mask".

One piece of information that is pointed out from the Department is that in the face of the open file, the company Seyma, based in the municipality of Petra, you have not requested the adversarial analysis to which you are entitled in the case of not being satisfied with the results of the commissioned by the Government. In any case, an appeal has been filed against the immobilization of their masks and the inclusion of two models in the Alert Network.

The sale of Abbacino masks has been very important during the pandemic, and even the Seyma company has received recognition for its ability to recycle itself in the face of the pandemic to market this product. What the Government's investigation has detected is that the material was manufactured in Mataró.

More brands in the Alert Network

As indicated, the Balearic Administration has introduced other brands of masks into the Ministry's Alert Network that also did not reach the level of protection required for this product, but without such an accentuated volume of immobilized units.

In the case of the Jiji brand, the affected units are around 2,300, while in Castelltort that decision has only reached 45. As regards the Xula masks, there are none immobilized despite the fact that their protection did not reach 15% because the company that sold them on the island withdrew the affected models and replaced them with others.