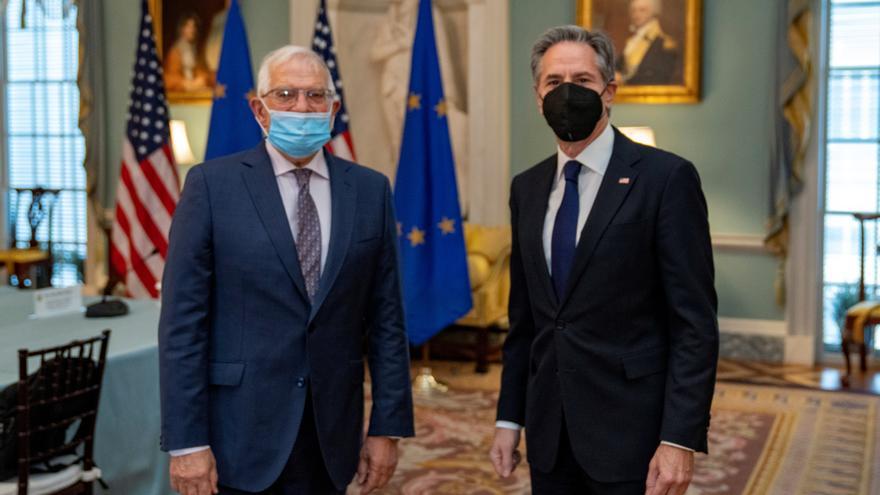 "They have not met to have tea", said Josep Borrell: "When you gather 140,000 soldiers on the border with Ukraine it is not to go to have tea". This is how the head of European diplomacy described the crisis with Russia after his meeting with the US Secretary of State, Anthony Blinken, within the framework of the EU-US Energy Council, which had not met for four years.

The meeting has come after the joint statement between the president of the USA, Joe Biden, and the president of the European Commission, Ursula von der Leyen, to ensure the supply of gas in the EU if the crisis with Russia breaks out, one of the main gas suppliers to Europe, precisely through Ukraine and Belarus.

"We share a strong concern about the risk on the border between Ukraine and Russia," said Borrell: "And we are certainly in the most dangerous moment for security in Europe since the end of the Cold War. But we believe that there is still room for diplomacy. We have to increase our efforts to avoid a great risk to peace and security. Mr. Lavrov [ministro de Exteriores ruso] has sent a letter to all members of the European Union asking that Russia's security concerns be taken into consideration. I am coordinating the response to this letter and insisting that there is still room for a diplomatic way out of the crisis."

In this regard, Blinken added: "It's not alarmism, it's facts. We have to deal with the facts to make sure we're fully prepared. And the facts are that we've seen Russian forces build up on Ukraine's borders in recent months. That's not happening in a vacuum. It's happening in the context of what Russia already did in 2014 by invading Ukraine, seizing Crimea and creating a conflict in Donbas, which continues to this day. That's what we're seeing. That's what we're responding to. We've shown that we're fully prepared to address those concerns reciprocally and to do so in full and very close coordination. But at the same time, given the facts that we're seeing, given the history that we know We must be prepared for what may happen."

What could happen, an attack of some kind by Russia on Ukraine in the context of the Kremlin, in turn, saying it feels threatened by the eastern expansion of NATO and its weapons, would trigger a series of sanctions that have not yet been advertised in detail. "When we talk about sanctions," said Borrell, "we talk about personal sanctions, commercial and sectoral economic sanctions, and financial sanctions. We are not threatening anyone, but we want to make it clear what the consequences of some actions would be. From the Union European Union, we have a certain number of tools in the economic, commercial and financial field that could be mobilized and be very detrimental to the Russian economy."

According to Blinken, "a high-impact, rapid-action response has been developed that would inflict heavy costs on the Russian economy and financial system, including significant sanctions and export controls that would have a long-term effect by denying Russia the technology it needs." in key sectors.

Tags: border, Borrell, gone, no, Russian, they have, troops, Ukraine