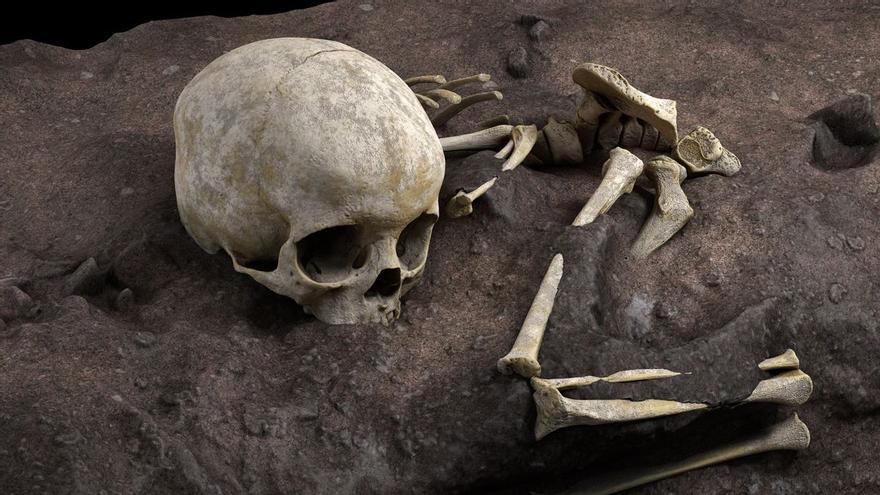 Africa It is the place where our species was born biologically and culturally but, while in Eurasia there is plenty of early evidence of mortuary practices, in Africa there are hardly any records.

This Wednesday a study led by the National Center for Research on Human Evolution (CENIEH) based in Burgos describes the oldest burial in Africa, that of Mtoto, a boy buried 78,000 years ago in Kenya.

The burial is not only the oldest but it is also the confirmation that the populations of the Middle Stone Age (Middle Stone Age) began to have funeral rites.

“The boy, about 3 years old, was buried in a cavity that had been dug specifically for it. There he was deposited in a deliberate and very delicate position, almost fetal, with his head on a support, as if it were a pillow. His The body was wrapped in a type of natural shroud made with animal skins or leaves and, later, it was covered with earth, “the researcher and director of the National Center for Research on Human Evolution (CENIEH) explained to EFE., María Martinón Torres.

“Mtoto”, or boy in Swahili language, was buried 78,000 years ago in the Kenyan site of Panga ya Saidi, which has turned out to be a fundamental enclave to study the origin of our species and, above all, of its first complex funerary behaviors.

This finding, co-led by Martinón Torres’ team, the Max Planck Institute for the Study of Human History (Germany) and the National Museums of Kenya, and in which researchers from the Complutense University of Madrid and some thirty institutions from around the world have collaborated, occupies the cover of the journal Nature.

“Mtoto is the oldest evidence we have of burial or funerary behavior in Africa ” and it is interesting not only as a scientific finding but also because “it reveals the complexity of the human mind, which is capable of establishing complex links with the community beyond the physical world and interacting with those who have died”, highlights the paleoanthropologist.

Until now, the only evidence for a burial of similar chronologies in Africa was that of Border Cave, in South Africa, where the remains of another boy buried 74,000 years ago were found, but its scant documentation always made the find controversial.

However, in Eurasia there is a multitude of evidence of burials of Homo sapiens and Homo neanderthalensis. The earliest are those of the Qafzeh and Skhul (H. sapiens) sites between 90,000 and 130,000 years old, and that of Tabun C (Neanderthal), about 120,000 years old, all of them in northern Israel.

“Solid and clear evidence of burials in Africa was lacking and that is why the find of Mtoto is so interesting“Although, for the scientific community, why no more burials have been found in Africa remains a mystery.

The fact is that much remains to be done, acknowledges the head of CENIEH, “we have to be open to everything and perhaps review some sites, such as Border Cave, using the most advanced paleontological techniques, such as those used at Panga ya Saidi.

The first bone fragments from the Kenyan site were found in 2013 and a few years later a circular cavity was detected located about three meters below the cave floor level. Given the fragility of the bones it contained, the earth was extracted en bloc to study it with different techniques.

The block was excavated manually and virtually, combining the microtomography -a technique based on X-rays that allows to analyze the interior of a block without manipulating the original fossil- with granulometric and geochemical studies on the composition of the soil and the processes it has harbored.

These techniques made it possible to find out that the soil that was used to fill the cavity was different from the rest of the level where the cavity had been found – which means that it was extracted from the ground in another part of the cave – and that it helped to preserve the articulated body just as it was found.

In addition, the earth had some of the chemical remains that are generated in the processes of putrefaction mediated by bacteria, “another sign that the corpse was deposited immediately after death and with its soft tissues “, adds Martinón Torres.

In parallel, CENIEH researchers carried out the sediment block excavation and microscopic analysis of the child’s bones and teeth.

But Panga ya Saidi is also important for archaeologists, since tools of MSA technology have been found alongside human remains, a fairly advanced type of industry that had also been attributed to other species such as the Homo naledi from South Africa.

“This deposit contains the first direct association of the use of this industry on the part of Homo sapiens, something that for archaeologists is very important evidence “, concludes the head of CENIEH.