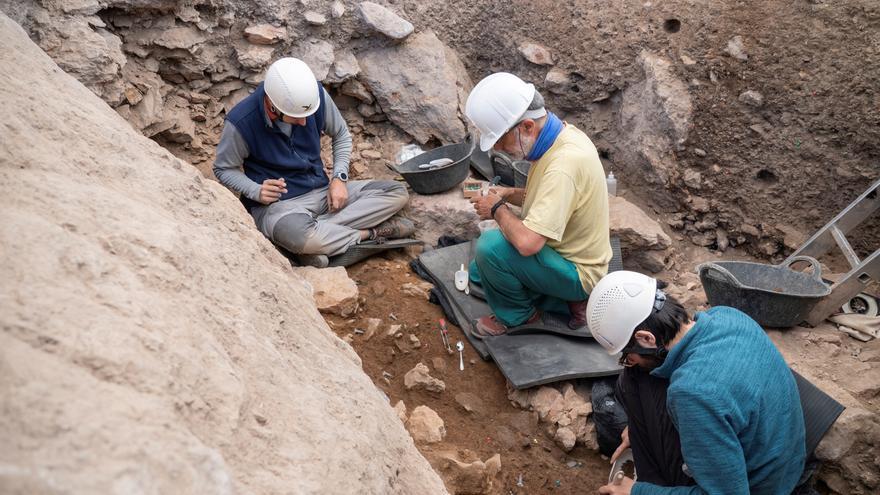 Lleida, Jun 16 (EFE) .- Researchers from the Center for Archaeological Heritage Studies of the Autonomous University of Barcelona (CEPARQ-UAB) have discovered the remains of a woman, 'Homo sapiens', in the Gran de Santa Linya cave (Lleida). who lived in the eastern Pre-Pyrenees at the end of the Final Upper Paleolithic, about 14,000 years ago.

As reported by the researchers this Wednesday at a press conference, the discovery took place during the campaign last year two meters underground, in a lateral area of ​​the excavation where CEPARQ members have been working since 2002.

The sets of recovered remains form two femurs, one of them connected to the pelvis, as well as long bones of the upper extremities (humerus, radius and ulna), and lower (tibia and fibula) and scattered phalanges.

Likewise, they have found the skull and the axial skeleton (vertebrae and ribs), although, in this case, they are poorly represented.

The remains were found within a space considered a natural receptacle, delimited by several large blocks and, at present, they are investigating whether the bones of the extremities were displaced towards the cubicle, while the axial skeleton and the skull would be protected under one of these big blocks.

However, what the researchers do confirm is that the entire body of a person was deposited in this space and, based on the position of the femurs, rested directly on the floor in a supine position.

The dating of the remains of what they have nicknamed as "Linya, the woman from La Noguera" suggests that she died between 14,350 and 14,100 years ago, the date corresponding to the Final Upper Paleolithic.

The professor of the UAB Department of Prehistory and CEPARQ researcher, Rafael Mora, explained that “Linya's remains open a new window to bring us closer to the circumstances of her death, but also to her life and that of her contemporaries in the region".

"At the same time, they are a key piece in understanding the anatomy and genetic heritage of the hunter-gatherer populations of the late Pleistocene of the northeast of the Iberian Peninsula", adds Mora.

Once the skeletal remains have been found, the experts are now investigating possible elements of grave goods, a common practice in the burials of 'Homo sapiens'.

In this sense, the sediment in the space delimited by the blocks is being analyzed to recover micro-waste that may indicate whether the corpse was covered with plant hair or fibers, a fact that would justify the intention to deposit the body without the need to excavate a funerary space.

The researcher Jorge Martinez-Moreno has explained that "the mortuary treatment among hunter-gatherers indicates several possibilities, ranging from an intentional burial, a secondary burial, a partial contribution of the body, cannibalism or accidental death."

"All these scenarios - he assures us - will have to be evaluated based on the results provided by the excavation of the space in which the remains have appeared."

The discovery of human remains in the Iberian Peninsula attributed to the Late Upper Paleolithic is scarce and, therefore, the Gran cave will be "key" to better understand how they were anatomically and where the hunter-gatherer populations of the end of the Pleistocene came from.

The CEPARQ team is convinced that Linya's finding will allow modulating current notions about the anatomy of those 'Homo sapiens', of which “we have less precise knowledge than about Neanderthals”.

At the same time, the experts point out that "the causes that led to its appearance in a space configured by large blocks, will deepen the knowledge about the behaviors and decisions made by those people in the face of a transcendent and daily event such as death."

The Gran de Sant Linya cave, in the Lleida region of La Noguera, is a site discovered in 2002, has more than 2,500 square meters and is considered "key" for the study of human presence in the northeast of the Iberian Peninsula.

So far, it is one of the few sites in the Mediterranean region in which vestiges of moments of transition have been identified, of the last Neanderthals, of the first modern humans, their survival during the Last Glacier Maximum, as well as the appearance of the first farmers and ranchers.

The CEPARQ-UAB team's research has the support of the Ministry of Science and Innovation, the Archeology and Paleontology Service and the Department of Culture of the Generalitat, the Institut d'Estudis Ilerdencs (IEI), the Palarq Foundation, of the Leakey Foundation and the City Council of Les Avellanes i Santa Linya.