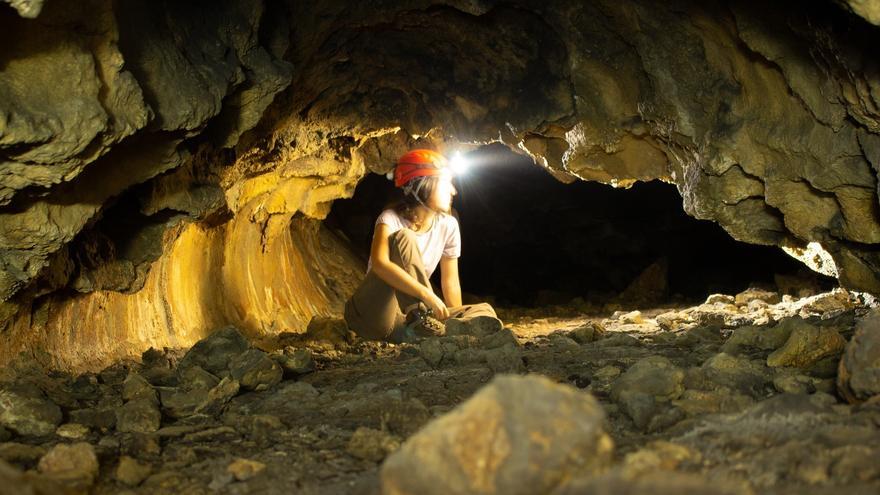 A team of specialists has accessed for the first time, through vertical progression and a drone, in the hanging caves of different municipalities on the island of La Palma to carry out archaeological surveys, finding remains linked to the realm of life, death and the religious magical world of the Benahoarites.

La Palma's aboriginal past remains intact in its hanging caves. The hard-to-reach cavities located in ravines, cliffs or cliffs had a residential, funerary and / or economic use by the Benahoarites and were probably abandoned 500 years ago after the conquest.

However, these deposits had not been explored or studied, since until relatively recently the materials and techniques necessary to enter them were not available.

Now, the General Directorate of Cultural Heritage of the Government of the Canary Islands has financed a third phase of this research penetrating those caves where archaeological elements can still be found practically intact that can be studied.

The survey project, led by the archaeologist Nuria Álvarez and the Speleologist and climber Eduardo Díaz, began in 2017 in order to encourage knowledge of the aboriginal populations of La Palma.

The areas of action of the past initiatives were, mainly, the municipalities of Step, Fat tip Y Mallet, and in this new phase the municipalities of Puntallana and San Andrés y Sauces have been selected for being two practically unknown territories for the archeology of La Palma due to the lack of Archaeological Letters.

The archaeological heritage of La Palma is very rich and varied but the numerous looting carried out at the sites have contributed to the lack of knowledge about the Benahoarite culture.

The chronological distance of these populations from ours, as well as the fragility of the archaeological materials added to the constant looting, has caused the disappearance of the legacy of our ancestors.

In order to recover and promote knowledge of our history, and after analyzing the serious problems suffered by palm archeology, Nuria Álvarez indicated that easily accessible caves "are very affordable for those who are dedicated to plundering the archaeological heritage of the island of La Palma ".

Then, they considered that those caves that are hanging "are those that can meet the appropriate conditions to be able to find an archaeological site in its different types, preserved or in a better state of conservation" and also, "with archaeological remains relatively intact or less affected for the human being ".

This type of difficult-to-access cave prospecting initiatives, linked to vertical progression work, is a risky task that requires highly qualified professionals to carry out the simultaneous archeology and speleology work.

Through both written and oral references, the team proposes a list of the main cavities susceptible to be studied and uses a state-of-the-art drone to evaluate and consider what they hide and if they present the appropriate conditions for access.

With a rappel, the vertical progression is carried out and once inside the cavity the speleological and archaeological investigation begins through prospecting work.

Basically, this project is limited to identifying archaeological sites with the presence of lithic and malacological industries, terrestrial fauna, ceramic remains or human remains, but some type of intervention or excavation in the future is not ruled out.

The general director of Cultural Heritage, Nona perera, accessed one of these cavities to find out in situ the advances of this new phase of research, "since it is a project that is having good results, which add complexity to the delineation of the aboriginal population because a high percentage of these cavities had a residential, funeral or economic use ".

For this reason, from the General Directorate of Cultural Heritage there is a commitment to continue supporting this research "to try to complete as much as possible the knowledge of the aboriginal population of La Palma", he says.

For the co-director of the project, Nuria Álvarez, it is a unique opportunity, since these caves are "a small bubble of time that allows us to discover for the first time something that is relatively intact and I think that is quite positive for the archeology of La Palma ".

Use of hanging caves

Most of the cavities visited have achieved satisfactory results, as they all contained archaeological remains linked to the realm of life, death and the magical religious world of the Benahoarites. In addition, the deposits are in a good state of conservation, which justifies the need for this type of project.

After having accessed more than 40 caves with vestiges, which can even be observed with the naked eye, it is intuited that the occupation of this type of cavities was more frequent than previously thought.

The Benahoarita population used these spaces for living, funerary and economic purposes, "because among the results we have obtained we have found caves, especially funeral homes, caves with human remains that tell you about the use of those hanging caves to deposit the deceased" , clarified the archaeologist Nuria Álvarez.

In previous projects, it was shown that the Benahoarites were able to access caves located more than 20 meters high to use them in different ways. Several burial sites have been found at surprising heights, which involves specific climbing techniques to introduce the deceased inside the cave.

Among the first hypotheses that are considered on how they could access the hanging caves without any apparent resource is the use of some type of scaffolding but it also influences that the terrain has been modified at present, which would allow it to be accessed in a easier to those cavities in those moments.

Definitely, this project is opening up new lines of research within the archeology of La Palma, or as Álvarez specifies, "perhaps new questions to be able to know what was the functioning of the funeral sites and how they accessed each one of them".