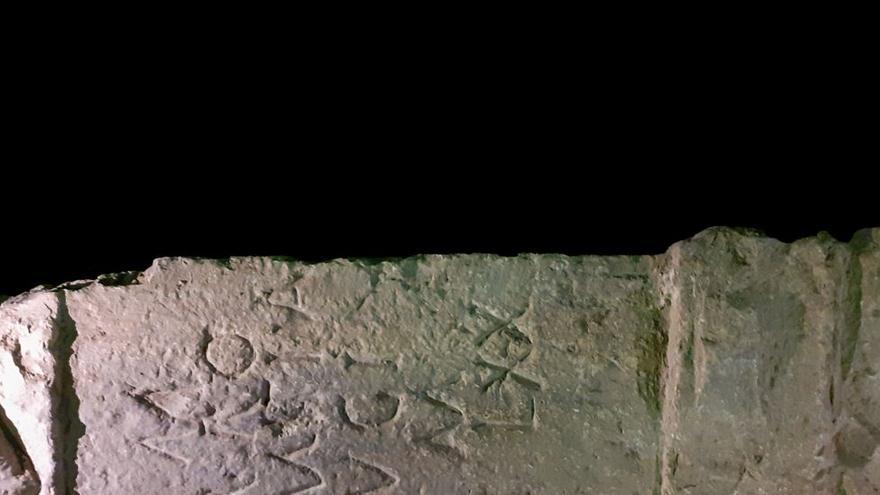 The discovery occurred at the foot of the façade wall, very close to the main door, and the location of this tombstone – in this northern area of ​​the Roman city and so far from the urban center – suggests some kind of rural facility, of type ‘villae’, which would depend on the old Valentia, point from the consistory. It is also the first complete inscription found in the Valencia excavations in the last decade. The piece has already been transferred to the facilities of the municipal archeology service, where it will be analyzed and studied.

Municipal experts consider that recovering an inscription is always an event “of great interest to the scientific community, because it is a direct source that tells us about the primitive inhabitants of Valentia.” In this case, everything indicates that it refers us to some characters initially of servile origin, slaves or freedmen, who would be exercising a task of responsibility in the work of the agrarian exploitation of the Roman town.

History linked to the rural world

The Councilor for Resource Management, Luisa Notario, explained that “the rehabilitation of buildings with heritage value must be accompanied by exhaustive archaeological and historical studies that allow us to specify the type of rehabilitation but also provide us with very valuable information on the history of this city more linked to the rural world, which is very important, and which is essential to know and make visible “.

“We are doing a job of recovery of architectural heritage rural area of ​​València and, in six years, we have intervened in many buildings, such as this Alquería Falcó itself, to be able to rehabilitate it and put it in value so that it can be enjoyed, firstly by the neighborhood, and then by all citizens “, has asserted.

“The rehabilitation of these buildings has been the object of various neighborhood demands for years and is now being carried out thanks to the municipal plan for the consolidation and rehabilitation of buildings with heritage value that we already launched in 2015 and with which we have already rehabilitated buildings historic buildings such as the Alquería del Moro or the Aben al-Abbar chalet, among others, “recalled the mayor.

The architecture service, the central technical services and the municipal archeology service are carrying out, during the months of June and July, a historical and evolutionary study of the Alquería Falcó building to later undertake the comprehensive rehabilitation project of the building.

That is why two types of actions are being carried out, one focused on the study of wall archeology and the other on the excavation of the subsoil.

The results obtained have made it possible to establish a medieval origin for the farmhouse, made up of two buildings, to verify the growth of both in the late seventeenth century and its transformation to the present day.

The house located to the east maintains the classic structure of the type “house with two hands”. The ground floor is distributed around an open central corridor, traditionally known as “de carro”. The space gives access to the stable, located at the back, leaving the private and common rooms on both sides. The “carriageway” retains a magnificent herringbone and pine-shaped tile pavement while in the rooms they retain pavement of hydraulic mosaic, in the style of Nolla.

The upper floor is entirely occupied by a “chamber”, on the walls of which you can see traces of the anchors of the beds for the breeding of silkworms, an activity that was later abandoned due to the cultivation of tobacco and other agricultural products, especially commercialization. of onion. For its part, the house in the western part is very transformed. It presents the scheme of the type called “one-hand house”, with a “car pass” and several rooms located on one of its sides.

The archaeological studies carried out show the evolution of the building throughout history. In the various underground tastings, remains of walls related to the medieval origin of the farmhouse have appeared. Likewise, it is known that, at the end of the 17th century, the farmhouse had two floors with a large “L” -shaped chamber, about 6 meters high. In addition, the tastings carried out on the walls have made it possible to identify the different construction techniques of the building over time, and have also revealed traces of old windows, arches, openings and bricked up doors that facilitate the understanding and reading of the building.

Another element studied has been the one known as the pellet tower, attached to the farmhouse, which constitutes one of the few examples preserved at the national level and the only one in the Valencian Community, they conclude from the consistory.