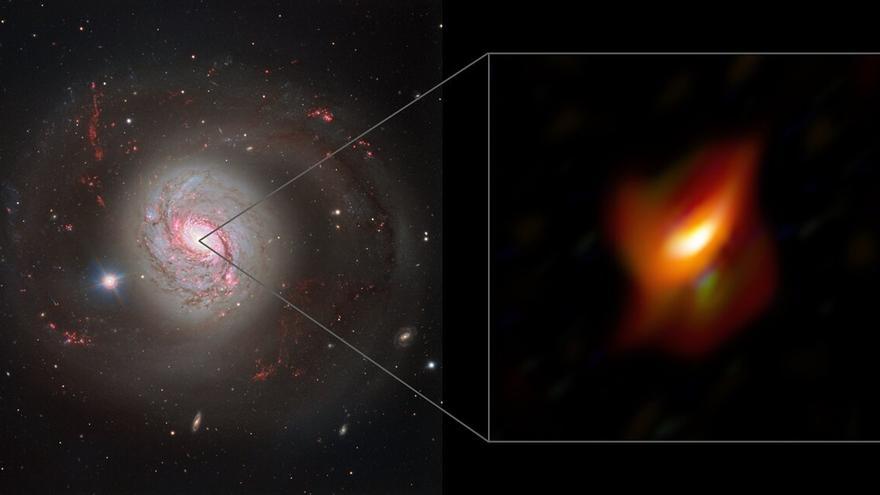 Observations of the dense cloud of dust that hides a black hole supermassive in the center of the nearby galaxy Messier 77 have offered the clearest confirmation yet of the theory that explains the structure of active galactic nuclei (AGN, in its acronym in English), proposed about three decades ago.

The journal Nature publishes this Wednesday the conclusions of a study based on extremely detailed data obtained with the interferometer of the large telescope of the European Southern Observatory (ESO) of the gas that accumulates in that galaxy, also identified as NGC 1068.

A group led by Violet Gamezfrom the University of Leiden (The Netherlands), has determined that the material of its galactic center revolves around a large black hole, which will end up devouring it completely.

During this process, which is believed to be common with other AGN, large amounts of Energy, so these centers often outshine the rest of the stars in the galaxy.

The structure of the thick ring of cosmic dust that covers the Messier 77 black hole provides key new evidence to support the theory known as the Unified Model of AGN.

These massive centers are "the essential building blocks in the creation and evolution of galaxies," the lead author of the work explained to Efe.

Previous observations of various galaxies, including NGC 1068, had pointed to the presence of hot material near their centers, But "the wavelength and resolution range of those observations were not adequate to establish the structure of the dust cloud," said Gámez.

"Our results are the most direct proof of the Unified Model", highlighted the researcher. "Although no single result will answer all the questions we have, we have taken an important step in understanding how AGNs work," she added.

The observations were made possible by the MATISSE (Mid-Infrared Multi-Aperture Spectroscopic Experiment) instrument located in the Atacama Desert (Chile).

MATISSE combined the infrared light received by the four 8.2-meter telescopes of the Very Large Telescope (VLT) of the European Observatory using a technique called interferometry to scan the center of Messier 77, 47 million light-years away in the constellation Cetus.

"The images we obtained detail changes in temperature and absorption by dust clouds around the black hole," said co-author Walter Jaffe, a professor at Leiden University.

The temperature of the powder varies between just over zero degrees and 1,200 degrees Celsius. These changes allowed to build a detailed map and identify where the black hole should be locateda structure that supports the current Unified Model.

Gámez stressed that the work can help "better understand the history of the Milky Way, which harbors a supermassive black hole at its center that may have been active in the past."