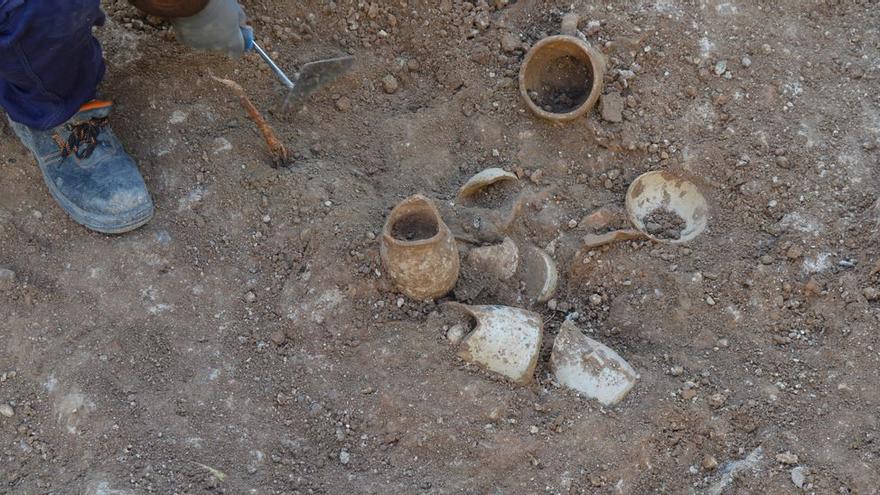 The tableware includes, among other objects, six glazed jugs, three plates and two bowls, as well as common kitchen ceramics such as pots and pans, which are still in the study, reconstruction and inventory phase.

“We are facing a new finding from the excavation of the Plaza del Ángel, a finding that we will include in the future museographic assembly that we will make in the interpretation center of the wall and that will tell us about the urban development of the Carme neighborhood throughout the centuries “, has remarked the Councilor for Heritage and Cultural Resources, Glòria Tello.

The mayor explains, in a statement, that “it is known that in the 15th century there were houses in the area, houses that had used the wall as part of the domestic area, houses with their patios, and in one of these patios is where has found a set of tableware decorated in blue on white as well as pots, pans, lamps and also jugs “.

For the councilwoman, “They are typical productions of the Paterna or Manises workshops, despite the fact that we know that they were also made in other towns around Valencia and even in the capital itself “, and he points out that”It is a set of entire ceramic pieces that would be part of the trousseau of a house and they jumped into a hole in the yard. ”

“This group of ceramics, together with other pieces from the excavation, we have considered that They must be included in the museum set-up that we will make in the future interpretation center of the wall, which we will build in the Plaza del Ángel.. This interpretation center will have a section where the urban evolution of the Carme neighborhood over the centuries will be discussed, “Tello has advanced.

The localized glazed jars contain decorations in blue on white and three of them repeat the same motif of a cross topped with vegetal elements. One of the plates has a drawing of a rabbit, two of the plates have pseudo-heraldic motifs while two of the bowls also have a heraldic drawing that has yet to be determined.

Common ceramics have also appeared in the set, especially jugs decorated with manganese, an element that is used as a pigment. Likewise, pots and pans have been found, pieces that are still pending reconstruction and inventory.

Municipal archaeologists believe that these are common ceramic pieces, manufactured in series and of massive use among the general population of the time. In fact, similar objects have been found in other archaeological excavations in the city.

The crockery has been found in an uncovered pit located in an agricultural context, in open-air outbuildings intended for stabling, possibly a corral or a patio. The reason why it was rejected is unknown but the fact that it was buried and set aside in its entirety makes municipal archaeologists think of its contact with a sick person or an infectious process.