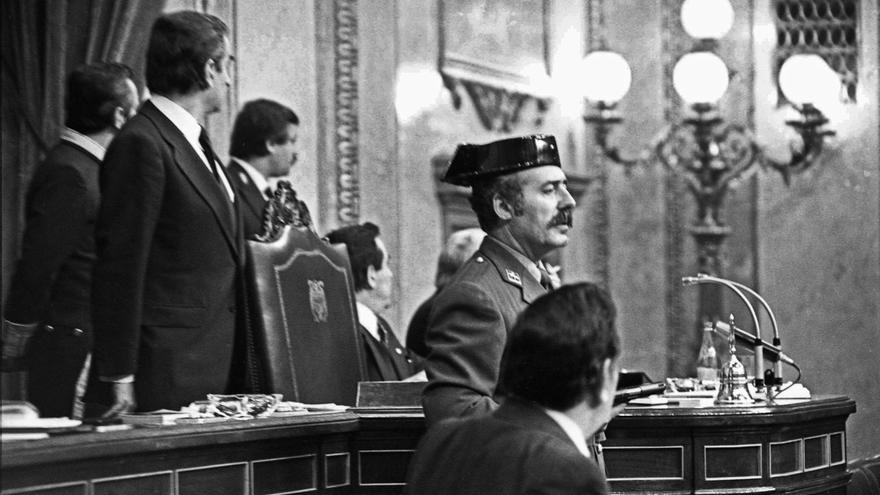 The 23F and the multiple conspiracy theories surrounding himn have inspired in the last forty years dozens of books, films Y series, a production between the documentary and the fantastic that started the same night as the coup in the mythical newsroom of ‘El Víbora’.

The phrases of “Quiete everyone!” “Down!” and “Feel, fuck!” uttered by Tejero on February 23, 1981, surprised Toni Alcántara (‘Tell me how it happened’) in the thick of it, in the Palacio de las Cortes, where he was covering as a journalist the voting for the inauguration of Leopoldo Calvo Sotelo when the shots rang out.

And to his sister Inés, an actress and with a background, in Valencia, where the tanks took to the streets and she began to think about fleeing into exile. Two episodes of Nerves and Tension (issued in 2013) required the historic production of TVE to reel off, in its 14th season, the longest night in the country’s democratic history.

In addition to this series, the event has been portrayed in various television fictions, one of the formats that has most recreated this historical moment, such as ’23 -F: The King’s Hardest Day ‘(2009), miniseries directed by Silvia Quer that brought together Emilio Guitiérrez Caba, José Sancho and Lluís Homar in a production that won the National Television Award.

The same year 2009 saw the light ‘23-F: History of a betrayal ‘the bet of Antena 3 and Quartz TV for portraying the event directed by Antonio Recio and starring Sergio Peris-Mencheta and Bárbara Goenaga.

The documentary series about this event are also numerous and among them the 2009 production of Globomedia stands out ‘That thirty years is nothing’, four chapters that explore the changes in Spanish society since the approval of the Constitution.

And it was precisely a television program about 23F one of the most controversial broadcasts of recent years: ‘Operation Palace’, the mockumentary that aired on La Sexta in 2014, as a special edition of the Jordi Évole’s ‘Saved’ program.

The journalist was inspired by the American film ‘Operation Luna’ to make viewers reflect On the manipulation of information and with testimonies and alleged secret documents, he revealed one of the best kept secrets of the last century: the coup had been a montage orchestrated by political elites to strengthen democracy.

Despite the fact that at the end of the program it was clear that it was a fiction, it received numerous criticisms since many believed during the broadcast in the words of characters such as José Luís Garci, Iñaki Gabilondo, Joaquín Leguina or Iñaki Anasagasti, who perfectly played their roles.

The cinema has paid less attention to the coup. The only film that gets into it is that of the Salamanca director Chema de la Peña, ’23 -F: The movie ‘(2011); based on real events, it is the story of three blows: Jaime Milans (Lluís Marco), Alfonso Armada (Juan Diego) and Antonio Tejero (Paco Tous).

‘Muertos de laughter’ by Alex de la Iglesia (1999) and ‘El calentito’ by Chus Gutiérrez (2005), they touch it more glancingly. The first, humorous, tells of the occupation of the state channel by a group of soldiers. Gutiérrez’s film, starring Verónica Sánchez, Macarena Gómez and Ruth Díaz, has as ingredients a musical group of girls, a trendy bar, the Madrid scene and the military coup.

He has also filled pages of essay books, biographies and research and, among them, the most recognized by readers has been ‘Anatomy of an instant’ (Mondadori), by Javier Cercas, essay in the form of a chronicle or a chronicle in the form of an essay that he published in 2009.

Beyond historical essays and many more or less conspiracy theories, One of the first novels set in 23-F was ‘A bad night has anyone’, by Eduardo Mendicutti. Published in 1982, it has just been republished by Tusquets and tells the story of La Madelón, an Andalusian transvestite who is panicked by the assault on Congress at the possibility of going back to the past and losing the freedoms that have cost so much suffering.

In 2003, Andrés Trapiello won the Nadal Prize with ‘The perfect crime friends’ which, set in Madrid around the historic date, raises a reflection on revenge. Another novel that has this historical episode in its plot is ‘Després del guaret’ (‘After the fallow’) by Juanjo García Navarro, “a historical reflection on militarism in Spain”, which starts “when, after a spring in which everything seemed possible, a reality check came”.

The book of stories ‘Course of 81’, by Juan Carlos Fernández, is a narrative that describes the academic and vital trajectory of a young man during that school year, with references to the social and political situation that involved the coup.

But the first artistic field to react was the comic. That same night the writing of “El Víbora” put many of its star cartoonists to work, such as Max, Martí, Sento, Pámies, Gallardo, Mariscal or Mediavilla to take a special on the day when the heart of the Spanish shrunk when seeing the images of the Congress or the tanks circulating through Valencia.

And so did the magazine ‘El Jueves’, another headline that published in the following days and weeks different graphic strips and vignettes in which they gave their satirical and ironic vision.

In 1988 Ibáñez pulled from memory to remember Tejero and his acolytes in a copy published by Ediciones B in which he dressed Mortadelo of the Civil Guard and made him take over the Congress of Deputies shouting “They feel, cork!” .

Theater plays such as the musical ‘La version de Tejero’, by Pepe Macías, or “23-F”: tragicomedy in one act, by Jorge Moreno, are other approaches to this event still wrapped in certain unknowns that fiction, along with historians, continues trying in their own way to reveal.