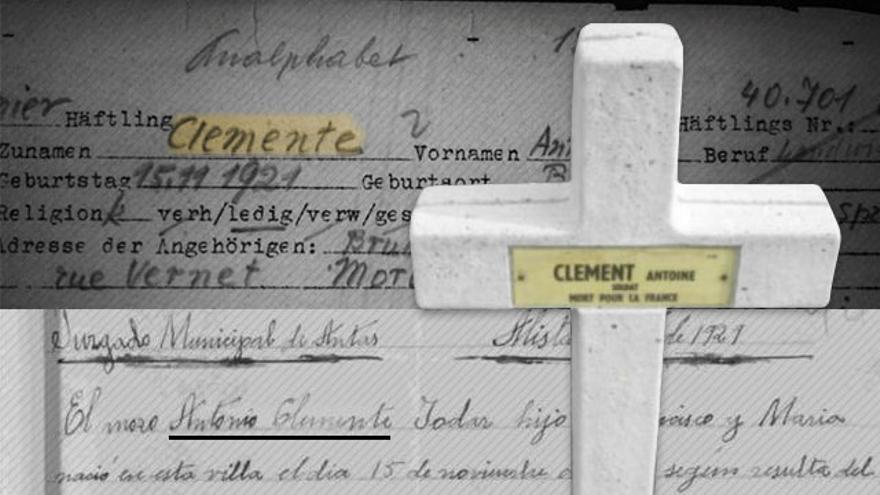 Dozens of white crosses arranged in semicircles populate the necropolis of the Cambronne-lès-Ribécourt military cemetery, just under 100 kilometers from Paris. A small plaque recalls the name of the person who rests there. Clement Antoine. Mort pour la France, says one of them. Despite appearing with a Frenchified name, Antoine Clement was Antonio Clemente, a citizen born in Vera (Almería), murdered in the Nazi concentration camp of Hradischko and mistakenly transferred by the French believing that he was from the country. This is what a group of researchers who have followed his trail until they found the find has just discovered.

The beginning of history dates back to 1945 in the civil crematorium in Strašnice in Prague. German soldiers brought in loads of bodies of prisoners killed by the SS in the Nazi camp at Hradischko, which had no crematorium of its own and depended on a larger camp, Flossenbürg. At first, the bodies were transferred by train to the ovens of the latter to be cremated, but the war was no longer at the same point and communications began to be complicated by the advance of Allied and Soviet troops. The solution found by the Nazis was the nearby crematorium in the Czech capital, 40 kilometers from the camp.

The modus operandi that the German soldiers had thought of was to order the cemetery administrator, František Suchý, to burn the corpses and dispose of their ashes, but faced with the horror he saw, he decided to disobey. He not only did not make the remains disappear, but with the help of his son he identified them. After the cremations, he deposited the ashes of each of the prisoners in an individual urn with a number that he noted on a list next to the name of the murdered person and he managed to hide the vessels with the ashes.

Once the war was over and the Nazi concentration camps were liberated, the French government began a mission in which they found the almost 2,000 urns that Suchý had managed to keep. The vessels with the ashes were buried with honors in the enclosure, in which a commemorative monument was erected. Six of them were Spanish, news that has been known 75 years later thanks to the work of researchers Unai Eguia, Antón Gandarias and Antonio Medina. But, in addition, the French government decided to repatriate the ashes of its compatriots, about 80, with the aim of giving them to their families. One of them, the one in urn 64,708, was Antonio Clemente.

"They didn't find his family because he wasn't French, so they buried him in the military cemetery along with other deportees who couldn't be handed over either," explains Eguia. The researchers have managed to collect some data on Antonio: he was born on November 15, 1908 in Vera (Almería) and passed through the Buchenwald camps, one of the first and largest, Flossenbürg before being transferred to Hradischko, where he was killed in date close to April 11, 1945, weeks before the end of the war. Coincidentally, on those days the soldiers ordered the murder of more than 150 prisoners while they were being driven to work, knowing that Soviet troops were nearby.

The exhaustive work of these three researchers, who on their own have delved into national and international archives and interviewed witnesses and relatives, allows today to know the history of Suchý and the hell in which the prisoners of Hradischko lived, a camp not directly conceived for extermination, but in which the conditions were subhuman. "They were in wooden barracks, with no running water and hardly any food. Many died," says Eguia.

The enclosure came to house 40 Spaniards, as documented by the researchers, who after consulting the German archives and portals with classified information on the transports documented by the SS themselves, have managed to compile a list with their names and data. It is not the only list: the French repatriation mission also made one and Suchý's own list is available, as he wrote down one by one the urns he hid and the one in the camp infirmary book.

The suspicion arose when Antonio Medina, recalls Eguia, reviewing the list of Frenchmen, noticed a name, Antoine Clement, "and he realized that in our list of Spaniards we had an Antonio Clemente." The only thing that didn't match was the year, although it did match the day, of his date of birth. So they got to work. One of the objectives was to clarify was the place of his birth. The list of the French assured that Clemente was from the French town of Peray, but when they investigated the German archives, many other documents made him a native of Bera (Navarra) and others from Bera (sic), in Almería. It was not strange, since in his writings the French admitted that they had had "difficulties in identifying the deportees by the spelling of their names."

After verifying that he was not on the list of Basque deportees, the investigators focused on the Almeria municipality of Vera. "The Town Hall archivist, Manuel Caparrós, got involved and has helped us a great deal. He provided us with the files of the town's villas and we found Antonio," recalls Eguia. Shortly after they found his burial place, almost 2,000 kilometers from his town. Now, the challenge is to find his family, a task that falls into the hands of memorial associations given the scant involvement that institutions have historically shown about the 9,300 Spanish deportees in Nazi camps, a chapter in history that Franco, Hitler's ally until his defeatconveniently took care of hiding.

Antonio Clemente and the rest of the Spanish prisoners in Hradischko who rest in the urns that Suchý managed to rescue from the Nazi horror will be honored on April 11 and 12 at the Prague crematorium. The investigations of Eguia, Gandarias and Medina have led to a network of relatives who had spent decades searching for the remains of their parents, uncles or grandparents. Gandarias and Medina are also the nephew and grandson of two deportees: Ángel Lekuona and Antonio Medina. Four of the families of the six Spaniards resting in Strašnice will now meet their loved ones for the first time.

The tribute, promoted by researchers and families, will also have an institutional tinge and will be attended by representatives of some autonomous communities, the Prague City Council and the Spanish, French and German embassies.

"It will be in the same crematorium where they were cremated. When we found the Moyas and informed them of where Rafael Moya, one of the deportees, was, his daughter told us that we had filled a lifelong void for him. He is 77 years old, but she was very young when her father was arrested," says Eguia. In addition to the tribute at the memorial, the next day the families will move to Hradischko, the camp where their relatives were killed. There they will make a hole and deposit a little earth from the place where each of the prisoners was born or lived most of their lives and then plant a tree.

From Maureillas-las-Illas, on the other side of the Catalan Pyrenees, will come the land of Enric Moner, urn number 62557; from Busturia (Bizkaia), that of Ángel Lekuona (62559), and from Marseille, that of Rafael Moya (62563). Antonio Medina, with urn number 62560, will be honored with land from Motril (Granada) and Vicente Vila Cuenca (62752), from Alberique (Valencia). From Pedro Raga (62558) will come the land of Ulldecona (Tarragona). Although he is not buried there, part of Antonio Clemente's native Vera, he will also travel to Prague. It will be thanks to the town hall archivist, Manuel Caparrós, who not only helped identify him, but also sent a bit of soil from his town to the researchers.