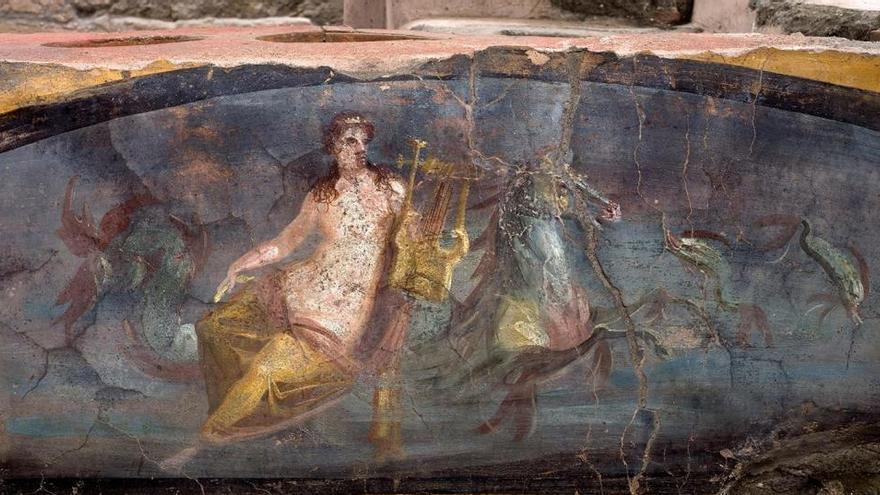 The archaeological area of Pompeii, the city destroyed in 79 AD. by the eruption of Vesuvius does not cease to surprise and this Saturday the discovery of a thermopoly, the place where food and drink were served to the inhabitants, intact and decorated and with still food remains.

The Italian Ministry of Culture and the archaeological area announced what they considered “another extraordinary discovery in Pompeii, in the new excavations undertaken within the Regio V maintenance and restoration project “.

It is about thermopoly, where food was served to the lower classes of the city, perfectly preserved with the counter with the image of a sea nymph on horseback and other animals so brightly colored that they appear three-dimensional, they explain.

But what has most surprised archaeologists is the discovery in the containers with remains of this food that was sold on the street and that is the origin of “take out” food.

In fact, it was the custom of the Pompeians consuming hot food and beverages outdoors and archaeologists and experts working in the Pompeii archaeological park are already studying the material to see how much this discovery can expand the knowledge about the eating habits of Roman times.

“In addition to being another testimony of daily life in Pompeii, the possibilities of analysis of this thermopoly are exceptional, since For the first time, an entire environment has been excavated with cutting-edge methodologies and technologies that are returning unpublished data“explained Massimo Osanna, General Director of the Pompeii Archaeological Park.

Now with an interdisciplinary work, several analyzes will be carried out in the laboratory to find out the content of the “dolia”, the earthenware containers in which food was cooked in ancient Rome.

The decorations on the thermopoly counter – the first to emerge from the excavation – show on the front the image of a nereid (nymph) on horseback in a marine environment and, on the shorter side, the illustration probably of the same store as a commercial sign.

In addition, in the thermopoly they were found different pantry and transport materials: nine amphoras, a bronze container, two jars and a ceramic pot.

The floor of the entire room is made up of the so-called “cocciopesto”, a waterproof covering made of fragments of terracotta in which fragments of polychrome marble have been inserted in some places.

Thermopolies, where hot food and drinks were served, as the name of Greek origin indicates, preserved in large dolia (jars) embedded in the masonry counter, were very common in the Roman world, where it was customary to consume the prandium (food) outdoors.

Alone in Pompeii there are about eighty, but none with the counter completely painted, which confirms the exceptional nature of the find.

The first analyzes confirm that the paintings on the counter represent, at least in part, the food and drinks that were actually sold inside the thermopoly: two mallards are represented among the paintings on the counter and, in fact, a fragment of duck bone has been found inside one of the containers, along with pig, goats, fish and land snails, attesting to the great variety of products of animal origin used to prepare the dishes.

On the other hand, the first archaeobotanical analyzes made it possible to identify Deciduous oak fragments, probably belonging to structural elements of the worktop.

At the bottom of a dolio, identified as a wine container at the base of the drinking bottle, which is located inside, the presence of beans, intentionally ground, was identified, which as claimed by Apicius were used to modify the flavor and the color of the wine, whitening it.

Another interesting fact is the discovery of human bones, found partially altered by the passage of tunnels made in modern times by clandestine excavators in search of precious objects.

Some are of a individual of at least 50 years who was probably positioned on a bed of which traces remain at the time of the arrival of the pyroclastic current that devastated the city.

Other bones, yet to be investigated, belong to a second individual and were found within a large dolio, perhaps placed there by early excavators.