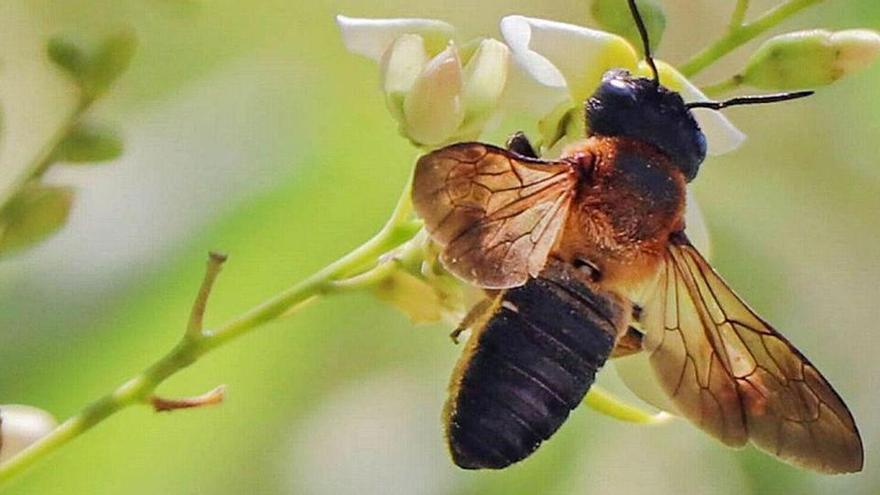 A new species of exotic bee has found a home in Majorca, at least since last year, when biologists Joan Díaz and Elisa Ribas they observed it for the first time in Portocolom. Known as the Asian giant resin bee (Megachile sculpturalis), has spread throughout the island after traveling a long journey from China, Korea and Japan, where it is from.

“First detected in Europe in 2008, in France. There is no way of knowing how you got to Mallorca, it is possible that through trade routes with Catalonia and the south of France“Diaz explains.” It probably came in the form of a nest. This species nests in holes found in wood. They enter, put a mixture of pollen and nectar, leave the egg and cover it with resin, hence its name, “he adds.

To date the species has been observed in Portocolom, Palma, Inca, Alcúdia and Sóller. “It is very widespread, at distant points from each other, which indicates that it probably arrived in Mallorca before 2020, when we detected it, because it could not have spread so much across the island in just one year “, Ribas emphasizes.

The two biologists, who have published their discovery in the journal Journal of Apicultural Research, indicate that there is not enough data to quantify the number of individuals of this exotic species that have settled in Mallorca, although they have observed “a rapid colonization process” of their new habitat. “We are not aware that it has reached other islands in the archipelago, but we take it for granted that it will at one point or another,” says Díaz.

“Bigger than the rest”

It’s too early to know what impact will this Asian bee have on the ecosystem and among the local bee population. “It is larger than all our species, except perhaps the ‘borinos’. But this one has a more stylized shape. In other places it has been seen emptying the nests of other bees to make its own, but we cannot know what effect it will have here. “says Díaz.

They came across the exotic bee for the first time last summer while walking around Portocolom. It was a fortuitous encounter, although not so much. “I was in one of those ornamental trees on the street. I knew that it had already been observed in Catalonia and it was a matter of time before it finally arrived in Mallorca. We are both very interested in insects, we are always looking at it and when we saw it we immediately realized that it was different “, Ribas recalls.

The size, its large head and dark wings betrayed that individual and the two biologists rushed to capture it, certain almost from that first moment that they were in front of the first giant Asian resin bee observed in Mallorca.

“We knew it had certain characteristics that differentiate it from the bees that we know here and you also know that you can find it. And it wasn’t long until we observed another in Palma, “says Díaz. Most individuals have been detected in Sophora japonica and Parkinsonia aculeata, two exotic trees that are very common in streets and urban parks.” They have a preference for this type of plant and we must be attentive to what effects they could have on their pollination “, he emphasizes.

These two biologists, trained at the UIB, consider that the so-called ‘insect hotels’ have also favored their settlement. “They are cut reeds in which insects nest. They also serve this species of solitary bees, which live very differently from honey bees, for example,” Ribas points out.

The introduction of exotic species into foreign ecosystems is something inherent to nature, the two biologists assume, even more so in a globalized world in which multiple entry ways open. “It is a more common phenomenon than we would like as biologists “, says Díaz. In any case, he is reluctant to describe this new resident in Mallorca as “invasive”. “We cannot label it that way because we still do not know its impact on the local ecosystem. We have to evaluate how it is related to the fauna and flora, how it will react to the island’s climate and based on that take action. And if we do it We will already have much more information for when it enters Eivissa and Menorca “, explains Díaz.

Fight the Megachile Sculpturalis, or at least trying, does not enter the equation yet. Last year, the Balearic Islands declared the Asian wasp, which is considered an invader, eradicated five years after the first nest was found. “On an island the impact of an exotic species is more important, that is why a lot of human capital is invested to eradicate species such as the Asian hornet. But we should be able to anticipate, invest in prevention to avoid it as much as possible”, claims Díaz .

A sting from this bee “does not pose a greater risk” than any other known species on the island. The two biologists encourage any citizen interested in following their trail that, if they find a specimen, record their observation with photos on citizen science platforms such as iNaturalist, Natusfera, Biodiversidad Virtual, or contact themselves. “It has dark legs,” they clarify after receiving observations from a bee similar to the newcomer, but with orange legs.