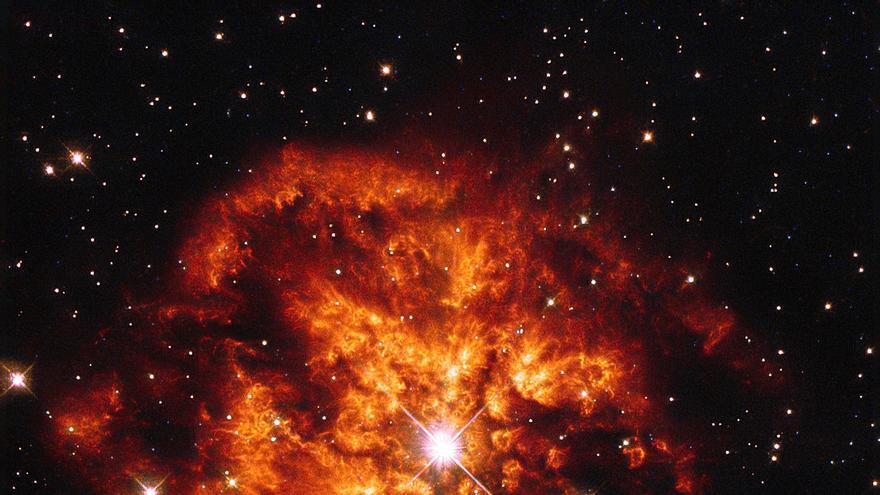 An international study, in which researchers from the Gran Telescopio Canarias (GTC or Grantecan) participate affiliated with Canary Islands Astrophysics Institute (IAC), has discovered the first explosive star of its kind, whose existence, until now, was only theoretical. The finding is published today in the magazine Nature.

Until a few years ago, the discovery of a supernova - the explosion of a very massive star, usually at the end of its life - was considered a rare event. Today, advanced measurement instruments and analysis methods allow 50 explosions of this type to be detected daily, which has made it easier for researchers to detect anomalous types of explosions that until now only existed as theoretical constructs.

Recently, an international team of scientists, led by the researcher Avishay Gal-Yam, from the Department of Particle Physics and Astrophysics at the Weizmann Institute, has discovered a supernova that has never been observed before. It is an explosion originating from a Wolf-Rayet star, a highly evolved type of massive star that suffers large mass losses due to intense stellar winds.

Evolution of the Wolf-Rayet stars

The core of every star is powered by nuclear fusion, in which lighter elements fuse to form heavier elements. The energy produced inside the star maintains extremely high temperatures that cause its gaseous matter to expand, thus maintaining a fine balance with the force of gravity that pulls the star's mass toward its center. When the star runs out of elements to fuse and stops producing energy, this balance is broken, giving rise to a huge black hole, which makes it collapse on itself, or the explosion of the star, which releases the elements into the Universe. fused during their evolution.

The lifespan of massive stars is considered relatively short, a few million years at most. The Sun, by comparison, has a life expectancy of about 10 billion years. Subsequent nuclear fusion processes in the nucleus of massive stars lead to their stratification, in which heavy elements are concentrated in the nucleus and, gradually, lighter elements compose the outer layers.

Wolf-Rayet stars are especially massive stars that are missing one or more of the outer layers made up of lighter elements. In this way, instead of hydrogen - the lightest element - the surface of the star is characterized by the presence of helium or even carbon and heavier elements. A possible explanation for this phenomenon is that the strong winds that blow due to the high pressure in the envelope of the star, scatter its outermost layer, causing it to lose layer after layer for several hundred thousand years.

The first exploding star of its kind

Despite their relatively short lifespan and state of progressive decay, analysis of the increasing number of supernova discoveries made researchers suspect that Wolf-Rayet stars simply do not explode, but silently collapse into black holes; otherwise, one could have been observed. This hypothesis, however, has just been dismantled thanks to the recent discovery.

Spectroscopic analysis of the light emitted by the explosion revealed spectral traces that are associated with specific elements. In this way, the researchers were able to show that the explosion contained carbon, oxygen and neon atoms. This last element had not been observed in any supernova to date. In addition, the researchers identified that the matter emitting cosmic radiation did not itself participate in the explosion, but originated in the space surrounding the exploding star. This, in turn, reinforced the hypothesis in favor of strong winds that stripped the star of its outer envelope.

Since this observation is the first of its kind, Gal-Yam states that it may be too early to unequivocally determine the fate of all these stars: "We cannot say at this time whether all Wolf-Rayet stars end their lives with An explosion or not. It could be that some of them collapse silently into a black hole. "

The researchers estimate that the mass that was scattered during the explosion is probably equal to that of the Sun or a slightly smaller star. However, the star that exploded was significantly heavier, with a mass at least ten times that of the Sun, making scientists wonder where most of the mass went.

Gal-Yam suggests an intermediate scenario, in which both possible destinations are fulfilled at the same time: once the nuclear fusion in the core of the star is exhausted, an explosion occurs that throws part of the mass into space, while the mass The remainder collapses in on itself, forming a black hole. "One thing is certain, this is not the 'silent collapse' that was talked about in the past", highlights the researcher.

The study used observations made with different telescopes, including the Gran Telescopio Canarias (GTC or Grantecan) located at the Roque de los Muchachos Observatory (Garafía, La Palma). For Antonio Cabrera Lavers, head of scientific operations at Grantecan and IAC affiliate researcher who participated in the study, “it is worth mentioning that, since this discovery, another similar explosion of a Wolf-Rayet star has been observed, which implies that this phenomenon it is not, in fact, a unique event ”.

For its part, David garcia Alvarez, co-author of the article and an astronomer from Grantecan affiliated with the IAC, believes that "it is possible that the better our detection and measurement instruments are, this type of explosions, now considered rare and exotic, will become common."

Antonio Marante Barreto, a telescope operator at Grantecan who has also participated in the observations, stresses: “Supernovae can seem like colossal events that occur far, far away and do not have a direct impact on our lives, but, in truth, they are at the heart of life itself; planet Earth and all its forms of life, including us, are the result of such an event ”.

The Gran Telescopio Canarias and the Observatories of the Instituto de Astrofísica de Canarias (IAC) are part of the network of Singular Scientific and Technical Infrastructures (ICTS) of Spain.