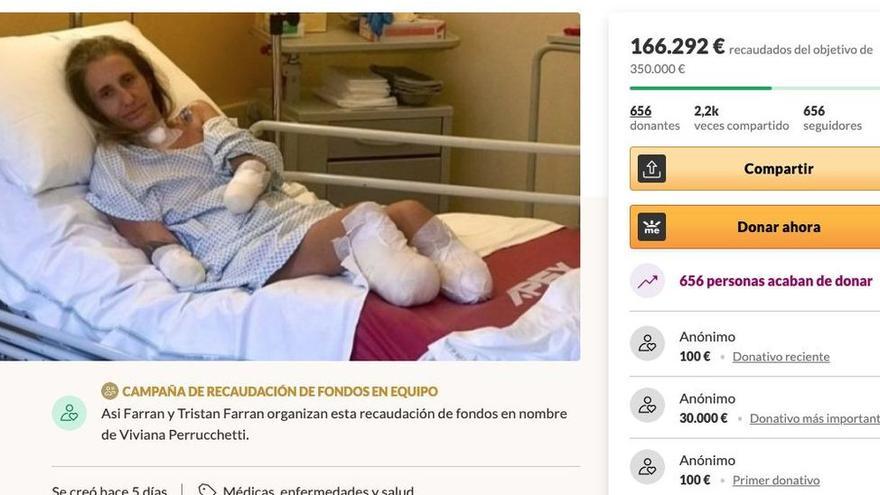 Farran, who lives in Sant Joan, details that at the beginning of March Viviana moved to live in Fuerteventura after almost three decades in Ibiza.

In Fuerteventura he visited a doctor in a private clinic for a stomach ache, suspecting kidney stones.

They sent her home, up to two times, on "a prescription for pain relievers and mild medicine" for kidney stones, but the pain was becoming "overwhelming."

Viviana woke up in the Intensive Care Unit (ICU) a few weeks later and was told it was a miracle that she was still alive.

To Viviana they did not detect a "serious infection" around one of your kidney stones and that it had rapidly escalated to severe sepsis.

By the time he got to the hospital, they say, he was already in "total septic shockl ".

Gangrene in the hands and feet

Weeks later, his hands and his feet developed necrosis and gangrene as a consequence of sepsis, Therefore, on April 12, she was flown to Bologna, where she underwent surgery to amputate all four limbs.

Now, with this campaign they intend to collect enough money to pso that Viviana can access a quality prosthesis and have "a good start in her new life so that, at least for the first few years, you don't have to struggle to pay the bills. "

The campaign, which has been running for five days, has already collected more than 166,000 euros, although the goal is to achieve 350,000 euros. So far, 656 people have already donated.

So Farran has appreciated all the help received and, although he is aware that they are demanding a lot of money and there are many people who have needs due to the economic crisis, he emphasizes that Viviana "is going to need it to start her life without feet and without hands."

Tags: ibiza, money, neighbor, they collect, they have