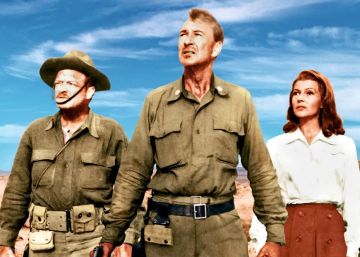 They arrived in Cordura Sounds promising good news these scrambled days. But in reality it is the title of an extraordinary as bleak classic novel of the adventure and western genre (twilight where there are) that has just published Valdemar in the Frontera collection, directed with an accurate eye and firm pulse worthy of Wyatt Earp the marshall Alfredo Lara The novel, which comes in the same, essential, volume with The gunman, by the same author, Glendon Swarthout, is a monumental story about courage and cowardice and the narrow line between the two set in the 1916 punitive expedition in Mexico of General Pershing against the troops of Pancho Villa, who had previously crossed the border and attacked with its irregular the city of Columbus, one of the few invasions that the United States has suffered.

They arrived in Cordura it became in 1959, a year after its publication, in a magnificent film, a classic like the novel, by the hand of director Robert Rossen and with Gary Cooper in the role of the protagonist, Major Thomas Thorn, whose mission is to determine what Soldiers deserve to be rewarded with the Congressional Medal of Honor, the largest US military award for value, the equivalent of the British Victoria Cross (The gunman, by the way, I also become a film, the last one by John Wayne). Together with Cooper, a Cooper in decline and with signs of prostate cancer that would kill him just two years later (although not before playing Captain Gideon Patch of The wreck of the Mary Deare and to make us never forget the word derrelicto), also starred They arrived in Cordura Rita Hayworth, as the tough American owner of a ranch Adelaide Geary, accused of collusion with the villistas.

The film, as we can see now when reading the novel, is very faithful to it, including the spoiled multicolored bird of the rancher and the gloomy and heartbreaking tone, which led John Wayne to take pestilence from the story by considering that he denigrated American heroes But the literary work is much, much darker and the end is extremely bitter, very hard, without any redemption. It is also filled with a wild and raw poetry worthy of the barren and hopeless landscape that is its framework. The original Thorn and Geary are much less physically attractive than Cooper and Hayworth (she is in the book "the least feminine woman I would have ever known" him), and that despite the fact that the novel's decorations officer is noticeably younger than what was Gary Cooper, too old for the character.

The author, Glendon Swarthout, based, modifying it, in a real event, the charge in Blue Eyes on May 5, 1916 of the 11th US cavalry, pistol in hand (the sabers had left them at the base), against the insurgents of Pancho Villa

In the plot Thorn, reader of Poe and Marco Aurelio, "the Hamlet of the cavalry", leads towards the base of Cordura to a unique patrol composed of the prisoner rancher and five military "of the golden race", a lieutenant, a sergeant, a corporal and two soldiers, all candidates to receive for their heroism the Medal of Honor, "the most beautiful of all" (a golden five-pointed star with blue blue ribbon dotted with white stars and which is the only American decoration that it is worn on the neck). Thorn, obsessed with what makes a man behave bravely and tormented himself for an episode of cowardice, is dedicated during the journey through hostile territory to survey the candidates for the medal trying to find out what led them to behave as they did. Four of the military have been proposed by the major himself for the award by watching them fight during the fight against the villistas entrenched in Ojos Azules, the ranch of Adelaide Geary. The author, Swarthout, was based, modifying it but achieving a very vivid description, in a real fact, the charge in that place on May 5, 1916 of the 11th cavalry, gun in hand (the sabers had left them at the base ), under Major Robert Lee Howze, one of the last of the US Army (neither in that episode nor in the entire punitive expedition was granted, however, no Medal of Honor). Swarthout, sergeant in World War II, had been in charge of recommending soldiers for the medal and certainly took advantage of the experience for his novel.

We are, of course, on the grounds of the great stories about the roots of courage and the painful lack thereof. Interestingly, if we ignore the fundamental treatise on the subject (Anatomy of Courage, by Lord Moran, Arzalia, 2018) there is the circumstance that the great reflections on the subject are found in novels. There they are above all Lord Jim, from Conrad (Thorn has jumped into a ditch like Jim from Patna) Y The four feathers, from Mason (the elder seeks to redeem himself in the Mexican desert like Feversham in the Sudanese, although by a more tortuous path).

I read They arrived in Cordura while watching the movie again and listening again and again to Frank Sinatra singing the central theme in the soundtrack ("The came to Cordura, in search of destiny as wand’rers have always gone ”…). It has been hard, but sobering. The supposed heroes are insubordinate to the elder – who always writes things down in a notebook: reports about his men, personal impressions (“the main product of this land is not the calf or the gold, but the loneliness”), technical considerations – , and revealed trivial or delectable types, "Galahads of Pacotilla", especially the stretched snob Lieutenant Fowler, the brutal sergeant Chawk and the repulsive corporal (degraded to soldier) Trubee. “Is it possible that a man can be treacherous and brave at the same time, lazy and brave, bad and brave, dishonest and brave; and on the contrary, can he be loyal, considerate, kind, honest and cowardly? ”Thorn asks tormented.

The trip, after a confrontation with the villistas, becomes a true infernal ordeal of six days, without horses and without water, in which paradoxically the eldest is the one who ends up emerging as the only character full, decisive and courageous. Some of us stay in that terrible ending with Thorn desperately pushing the crank car along the railroad in a Sisyphus effort and emulating a Christ in khaki. Gary Cooper was dragged during filming as the character in the novel and was quite battered. And also suffered damage with the wagon, more serious, Dick York (soldier Renziehausen), the charming and silly husband of the sorceress of Haunted Remember, he had to leave the series and his acting career for injuries. As in a The Wizard of Oz conversely, the brave pretensions of history arrive at their destination with all their cowardice and vileness in evidence. Read the novel to discover what really happens with Thorn and do not stop reflecting on how it would be, if necessary, our own arrival in Cordura.