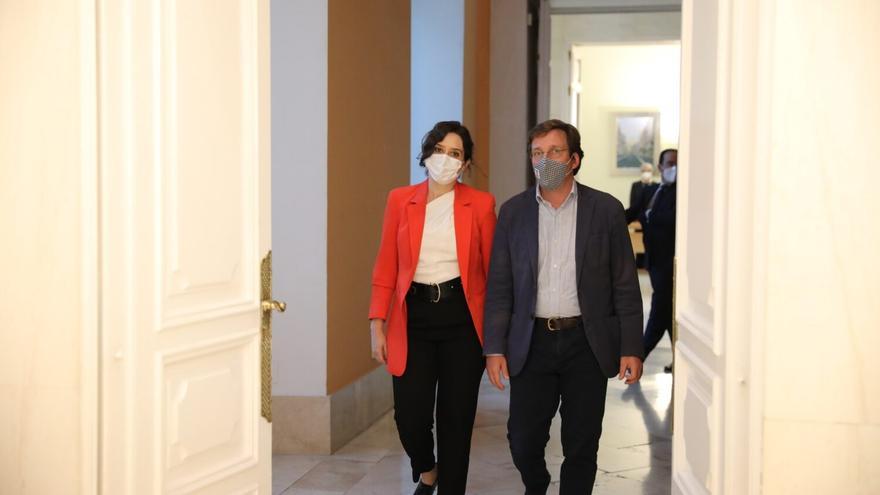 The Government of the Community of Madrid and the City Council continue their offensive to ask for the state of alarm to decline. The regional president, Isabel Díaz Ayuso, and the mayor of the city, José Luis Martínez-Almeida, have appeared this Tuesday together with the same message: that the state of alarm is an “outrage” that “dynamites the rule of law” and it keeps the Madrilenians “kidnapped”. The councilor has later rectified, assuring that he is not referring to “a physical kidnapping of the region”, but rather that the citizens “are being held hostage” in a “political battle.”

The president of the Community of Madrid, Isabel Díaz Ayuso, has insisted on requesting the cancellation of the measure in a press conference two hours before the meeting with the Ministry of Health. “If they continue to inform us of favorable data, we will continue to ask for the end of the state of alarm with which the Government intends to annihilate our autonomy,” he assured in an appearance in which the Minister of Health, Enrique Ruiz-Escudero, also participated in the Royal Post Office.

“Dynamizing the rule of law with the excuse of the common good is the straight path to the return of anarchy and totalitarian regimes,” added the PP leader in an escalation of tone at the gates of the meeting with the Ministry of Health after a day of statements by the entire autonomous government that advanced the opposite position to maintain the state of alarm.

For his part, Martínez-Almeida has ensured that infections in the city will fall to the threshold of 400 infections tomorrow. The councilor considers that the Ministry of Health has changed its criteria because “it has gone from considering 500 infections to 200 and then 100” to raise the state of alarm. “What we do not deserve is to be hostage to a political battle, to changes of criteria, we do not want to be more than anyone, but we do not want to be less than anyone,” Almeida has repeated. The reality is that the Ministry set that threshold since last October 1. Minister Salvador Illa also insisted on him last Friday at the press conference after the extraordinary Council of Ministers that approved the state of alarm in Madrid.

The mayor of Madrid has accused the Government of Sánchez of “covering” the deficiencies of his management by placing “the focus” on the Community of Madrid. “Virtually no autonomous community meets below 200,” he added.

The Minister of Health, Salvador Illa, It advanced this Tuesday early that the state of alarm will continue in force in Madrid capital and eight other municipalities at the moment. Illa explained in an interview on Cadena SER that the state of alarm will not yet be lifted, despite requests from the president of the Community of Madrid, Isabel Díaz Ayuso. “The accumulated incidence has to go down much more”, the minister has assured, “not below 500, but below 200 at least.” The ideal situation, Illa said, would be for the cumulative incidence to be “below 100 or around 100”. “This is the perspective that we want to discuss with them,” said the minister.

Regarding the division with his government partner, Ciudadanos, Ayuso has assured that “it depends on who you ask” within the orange party. “Begoña Villacís is with us,” said the regional president, avoiding mentioning her Citizens councilors and the vice president, Ignacio Aguado. This Tuesday the party’s spokesman in the Madrid Assembly had been against the withdrawal of the state of alarm. The deputy mayor of Madrid, on the other hand, had predicted that the meeting with Sánchez will not “do any good” because she already has a position regarding not withdrawing the state of alarm and has defended “measures that make the state of alarm perfectly avoidable.”