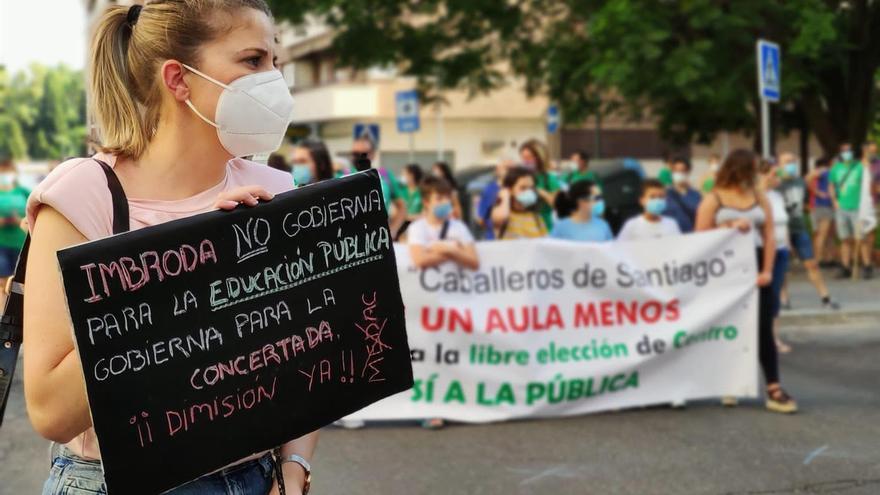 “With the heart in a fist”. This is how the fathers and mothers who define this beginning of the year as the most uncertain in recent decades will deposit their children in schools. The associations of families with children attend with amazement to the guidelines of the Ministry of Education, that they are leaving much of the responsibility in the hands of the centers. The management teams have rebelled against the burden of setting up a protocol against the clock that guarantees health security and conciliation in this changing epidemiological scenario. But in addition to subscribing to the teachers’ complaints, the parents, for their part, experience the uneasiness of “not knowing exactly what we are exposing our children to.”

Ciqui Simancas, vice president of the Federation of Parents of the Community of Madrid, FAPA, recalls that schools “are not dedicated to making badges, but to educating human beings, boys and girls who are very aware of the situation that we live and its dangers “. In his case, the Federation has been waiting for weeks for the Madrid counselor to clear up the numerous doubts that were raised in person and of which, they assure today, “we have no written commitment.”

These are cross-cutting issues in all autonomous communities such as the need to strengthen cleaning staff, hire more teachers, reduce classroom ratios, guarantee safe school transport for minors with special needs and know the situation of dining rooms where there are no the same bubble cells can be respected as in classrooms. “This is only part of the requests that we made to the Ministry of Education and whose response consisted of saying ‘yes’ to everything, but without offering us data on budgets, hiring or capacity in dining rooms and buses,” Simancas laments .

The central government has transferred 2,000 million euros from the COVID-19 fund to the autonomous regions to be allocated to Education, an investment that is as important in proportion as it is difficult to link to specific projects. “We hope that the 260 million donated to the Community of Madrid will not be used to fix windows, put heaters or remove asbestos, but there is no transparency,” explains the spokesman for FAPA, a platform integrated into CEAPA, the Spanish Confederation of Fathers and Mothers of the Alumnado, that they are registering at the state level that same request on the part of the families and the teachers. “Nobody assures us that it is going to go to Education because, in fact, it is not being done”, criticized the spokesperson for the teachers of CC.OO.

For now, the main security measures in schools will be to put on the mask correctly, that there are no more than 30 or 35 students for every 50 square meters -number that has gone in crescendo since March- and appoint a COVID-19 manager among the teachers who pays attention to possible symptoms compatible with the virus. But the hiring of health personnel or the extensions of the spaces, at the moment, are on the agenda of very few schools. “We understand that the person who diagnoses our children should be a school nurse or nurse, otherwise it is negligence and a workload that does not correspond to the teacher”, defends Ciqui Simancas, whose spirit has gone “from uncertainty to nerves and from nerves to anger “.

The possibility of regrowth that nobody talks about

The sprouts that have shown their face this summer, and that begin to fatten with the weakest groups, threaten to settle in schools if the prevention measures that epidemiologists have been warning are not taken. “Hygiene, distance and mask”, summarizes the representative of the FAPA. “If they have not had time to guarantee these three things, the most certain thing is that we will face contagions”, assumes Simancas, who nevertheless boasts of “prudence, logic and not an alarmist attitude” on the part of the associations of parents and mothers who want to facilitate the work of the authorities and the centers.

Less comprehensive are the AMPAs of Andalusia, where in several provinces they have announced that they will not take children to school until the Board guarantees them a health plan. “We do not want them to give us gels or masks, we demand a safe return to school”, threaten AMPAS in PIE along with a dodecalogue that includes measures such as “search for other spaces” that guarantee the meter and a half of security and “flexibility in schedules “to avoid crowds at the entrance and exit of the centers.

“The virus is spreading brutally due to family and youth gatherings and what I see is that the Health of the autonomous communities is not preparing at all,” says Paloma Uribe, technician of the Federation of single-mother families. She believes that educational centers are more aware and that is why many have designed a protocol according to four different assumptions: confinement, semi-confinement (open school for parents who cannot telework), semi-presence or normality. “At the health level there is no such forecast, just as it has not existed to stop the holiday outbreaks, and the same thing will happen to us as in the de-escalation”, predicts the spokeswoman.

The scenario that opens up before their eyes in the event of an outbreak does not reassure them even if there are certain protocols: “If a teacher is infected, should we send all his students home? If there are positives and negatives in a classroom, do Will the children who cannot attend in person follow the classes electronically? What if the families cannot accompany the minor during his confinement for work reasons? “, are some of the hypotheses that soon arise for Ciqui Simancas, of FAPA . “I am afraid that they are simmering a new closure of the classrooms,” he says as an explanation for that “lack of communication, transparency and foresight.”

“I hope I’m wrong,” he confides. A hope shared by the Federation of Associations of Single Mothers. “The priority of any father or mother is that their child is healthy and well, but there are single-parent families that are in survival mode. We have seen harrowing situations during the pandemic that we cannot allow again,” says its representative.

Women have had 20% more mental fatigue and 16% more stress than men during the telework days forced by the pandemic due to the greater dedication to caring for children and dependents, according to inferred a report by the Work and Family Center during the COVID-19 crisis. “These numbers skyrocket to 33% and 18% respectively in the case of single mothers”, reads Paloma Uribes. Confinement has jeopardized the situation of single-parent families, who have often been forced to risk the health of older relatives to take care of their children or, in the worst case, have lost face-to-face jobs because they did not to be able to make them compatible with the minor at home.

“Teleworking with them is not teleworking, because it is very difficult to try to focus on your tasks and at the same time on your child if there is no partner around,” he explains. On the other hand, the digital divide still exists and it is something really difficult to solve for families with less economic capacity, who have several children or who even have to share a computer with their father or mother. The latter is collected by Simancas and elevated to the practice of generality for tutors who work at home and “cannot afford several technological devices.” “On the part of the families it has been unbearable, but it is also that children need coexistence and face-to-face training. We neither want nor can we afford the opposite as a society,” he asserts.

In that sense, the absenteeism posed by some as an alternative to the lack of security in the classrooms, as they have warned that 100 AMPA associations of Malaga will do, is not the way for these two representatives. “Who stays at home educating the child? The father or the mother, who is the one who has assumed responsibility for the tasks in this pandemic?”, Says Paloma Uribe. “No, the educational system is well planned and children need to socialize. The focus must be placed on families without resources, who are the ones who most need a safe return to school,” he concludes.