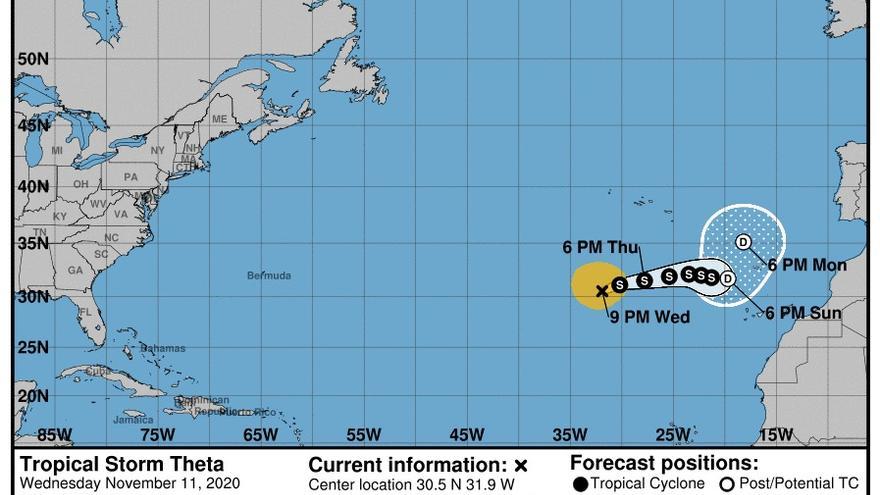 Tropical storm ‘Theta’ -which is located several hundred kilometers from the Canary archipelago- starting Saturday winds with strong gusts will leave the island of La Palma and a maritime storm especially on the north and west coasts of the islands of greater relief.

This has been reported by the spokesman for the State Meteorological Agency (Aemet), Rubén del Campo, who has indicated that ‘Theta’ has modified its initial trajectory towards the northeast, but according to current meteorological models it heads further east, “so that it will gradually get closer to the Canary archipelago.”

In the late Friday night, when it starts to turn to the southeast, getting even closer to the Canarian archipelago, it will lose intensity and weaken, “because the conditions that it will find both oceanic and atmospheric will not be the most favorable to maintain its condition as a tropical cyclone”.

According to Del Campo, while ‘Theta’ weakens and approaches the Canary Islands, an Atlantic trough will gradually approach, which will drive the tropical storm rapidly from Saturday and, especially on Sunday, towards the northeast, moving it away from the Canary archipelago definitively.

From this distance “it will lose its status as a tropical cyclone”, probably late Sunday night or early Monday.

With the changes of trajectory, “There is a possibility” that from noon or Saturday afternoon until early Tuesday morning it will affect the Canary archipelago in some way.

They are “very strong” winds, whichThey would affect the extreme north of the island of La Palma and its peaks, while the rest of the island and the rest of the archipelago would not notice a significant increase in the wind. Streaks are likely, but only occasionally strong, which does not imply a great impact, according to the Aemet spokesperson.

Likewise, there will be a maritime storm that “would be noticeable especially on the north and west coasts of the islands of greater relief”, mainly in the western islands of the Canary Islands.

Given the uncertainty of the path of Tropical Storm Theta, Del Campo recommends staying tuned for weather forecast updates.

Meeting in the Canary Islands

For all these reasons, island corporations have been urged to, over the next few hours and days, pay special attention to possible Civil Protection declarations that their specific recommendations could already be issued, in order to guarantee the operational immediacy of PEFMA and its preventive and operational integrability with the rest of the emergency plans.

All this, given the possibility that this atmospheric episode could directly or indirectly cause damage to people or considerable material impairment. This Friday a meeting will be held with those responsible for Civil Protection of all councils chaired by the counselor Julio Pérez and directed by the General Director of Security and Emergencies, Gustavo Armas, together with the Coordinator of Civil Protection and Emergencies, Montserrat Román, to review the main measures to implement if, finally, it is necessary to activate the Alert of the Emergency Plan for Adverse Meteorological Phenomenon (PEFMA) that is currently activated in the Pre-Alert phase.

Special notice activated between this Friday and Sunday

Aemet has launched a special notice what It will be activated this Friday and will be in force until Sunday, November 15 due to adverse phenomena originated by the tropical cyclone ‘Theta’ in the maritime areas of the Atlantic near the Canary Islands. The degree of probability it establishes is “very high”, 80 percent.

According to Aemet, it is expected to begin to affect the west of the Madeira maritime zone and the northwest of the Canary Islands maritime zone during the afternoon of Saturday 14, with winds of force 7 to 8 and heavy to very heavy seas. Probably, “its transition to a post-tropical storm will take place as of noon on Sunday 15, the wind calming down and the sea improving at the same time that its trajectory rolls towards the NE.”

With regard to the Canary archipelago, the Aemet details, “the effect on the islands is expected to be limited to strong gusts of up to 80 kilometers per hour in high areas of La Palma and Tenerife, although there is a small probability (less than 20%) that the winds over the north of La Palma will reach the force of a tropical storm, approximately 60 kilometers per hour.