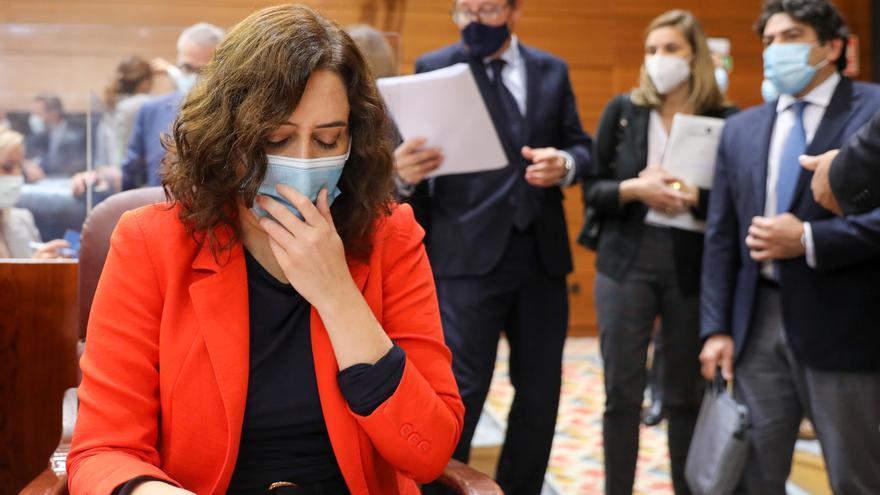 The president of the Community of Madrid, Isabel Díaz Ayuso, announced this Sunday that the Valdebebas emergency hospital that she had built in May for 50 million euros will be inaugurated this week. Díaz Ayuso granted an interview to Telemadrid to talk about the state of alarm approved by the Pedro Sánchez Government – with a mandatory curfew in the autonomous communities – after a day of total silence in the autonomous Executive. The Madrid president ended up announcing that next Saturday the controversial emergency hospital will be finished, but she could not answer how many toilets her Government is going to hire to care for patients in a health center that will have more than 1,000 beds. “These questions are not asked of a regional president,” concluded the president after several cross-examinations on the subject of the public television journalist.

The sequence between the presenter Silvia Intxaurrondo and the popular leader lasts just over two minutes. And at that time, Díaz Ayuso is unable to answer with which personnel this new infrastructure will be managed, which according to health professionals was not as urgent as reinforcing the depleted staff of the hospitals that are already standing and especially of the centers of primary care.

“How many health workers are you going to hire for the Valdebebas hospital?” The Telemadrid presenter asked Díaz Ayuso, who had just announced its inauguration. And there the mess started: “Well, we are in that contract right now, what is being seen above all is the reinforcement that comes from other hospitals and with it carry out that operation so that the hospital that is already about to be delivered has everything the willing staff, “replied the Madrid president, to the disbelief of the Telemadrid journalist who asked if that did not mean that the other hospitals were going to be neglected.

The nerves then took hold of Díaz Ayuso, who began to hesitate and doubt his answers: “The Valdebebas hospital will not lack any sanitary material, it will not lack any type of personnel, and what the Community is doing now Madrid is the hiring, choosing the material and everything you need “. The presenter insisted on asking how she intends to attend a hospital that the president herself announced as one of the largest in the country and if that meant reducing the attention of the rest of the centers that have already had a staff deficit for months.

Ayuso insisted on getting out of the mess he had gotten into without much success: “I mean that where it seems bad news, no. It is a new hospital, it is very good news and what is going to be a reorganization of troops. .. Nothing will be lacking. In other words, it is very good news that Madrid has a new hospital with a thousand beds and will have almost as many ICUs as a whole province has. It will not lack anything, “insisted the PP leader visibly distressed. And he added: “it will surprise the world.” The answer still did not convince the Telemadrid presenter who insisted on knowing with which toilets this center is going to be inaugurated.

The Madrilenian president assured then that it is not among her competences “to go down to that small print.” “These are questions that are not normally asked by a regional president,” concluded the head of the Madrid Executive.

The interview began after 9 pm. Ayuso connected from the Puerta del Sol Governing Council room – headquarters of the regional Executive – to assess the state of alarm with mandatory curfew that the Council of Ministers approved this Sunday. Ayuso claimed that the measure is “positive” because it assumes that there is “a clear command and order.” “It will allow the two governments to work together,” added the PP leader, after a day of silence after hearing the announcement. However, Ayuso wasted no time for criticism and stated that reaching this measure is “a failure” because it “damages the image of the country” abroad.

The Madrid president also advanced that her Government will bet on the curfew from twelve at night to six in the morning, a schedule that she had already announced this Friday with the order of the Ministry of Health that contemplated a similar measure. He also reported during the interview that the restrictions for basic health areas that come into effect this Monday are maintained. The capacity and mobility limitations in 32 health areas come into effect at dawn from Sunday to Monday. “These are measures that are working,” defended the regional leader.

The idea, he explained, is to go ahead with it “for a few weeks” to see how the pandemic evolves and review every fortnight. Thus, the curfew from 00 to 6 hours will be applied. It has been decided to do so because of “the distance” that exists between the region, which causes some citizens to “hang around” at 11 pm. They also want it to be the “shortest possible” schedule.

As for the entry and exit of autonomy, the chief executive assured that it is something that they will have to study because “legally it is not very clear.” Ayuso defended then that the Madrilenians “are not only those who can infect” and are not the “viral bomb” that was talked about, since it is “a problem” of all communities.

Tags: autonomic, Chairwoman, Diaz, explain, hospital, I help, not, personal, questions, valdebebas, will come out, you