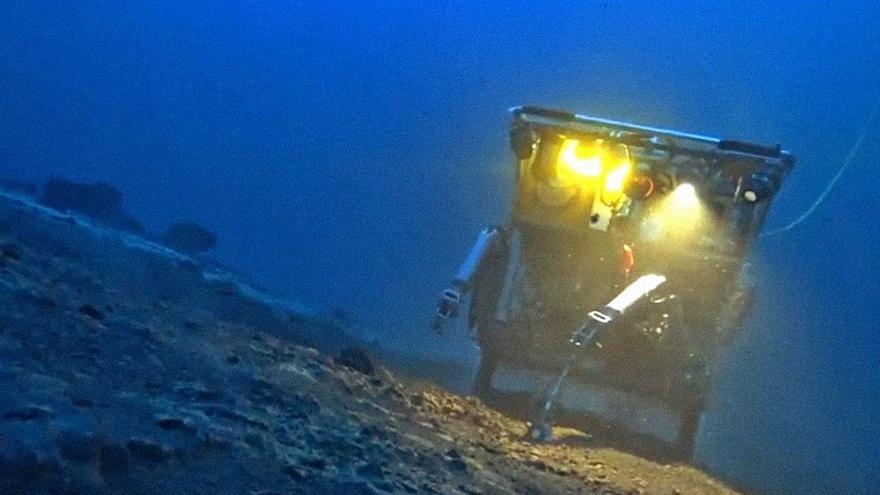 According to the technical report, in the course of the search, the Judicial Police were able to collect and analyze new information related to the case, such as discovering that in the long drift that the pleasure boat carried out after the loss of mobile signal, in a short period of time its engines started working again and it made a navigation of about three minutes.

Thus, the point where the engines stopped again became the most likely mark where Tomás Gimeno could have thrown himself into the sea. From this point on, a new take-off area was designed, around 500 meters, and delimiting the drift line from a street 500 meters wide, 250 on each side, on which to track. With the use of the underwater robot Liropus 2000, Ángeles Alvariño developed a total of 176 lines and transits, the polygon being delimited with a traveled distance of 60,006 meters and an explored area of ​​611,903 square meters. This drift line was taken as a base and the exploration was extended to both sides.

In the search, the two scuba bottles that were verified belonged to Gimeno appeared. These types of bottles give a very limited supply of air, and it is speculated that he used them in his suicide attempt to ensure that he reached the necessary depth to avoid turning back, the document collects. Search lines separated by five meters were established around the place of appearance of the bottles to ensure that there were no objects left in the area, no matter how small. Thus, the lead belt was also searched for, which would confirm that it was adrift, but could not be found.

Given the currents that exist on the seabed, it cannot be guaranteed that a body weighted down with a diving belt could not roll over and, consequently, reach an undetermined place and, therefore, outside the search capacity of the available to the ship. In this sense, and having no new clues at the time, the researchers proceeded to continue the search on the drift line that Gimeno’s boat would have followed. 35 lines were drawn perpendicular to it, with a separation of 20 meters. This would correspond to a 35-minute drift, being able to ensure 100% that the body is not in that area after covering 700 meters of drift.

From this point on, the seabed changes considerably, going from being an ideal area for searching to the opposite, becoming a very steep space with a large number of ravines and crevices. To facilitate the search, it was decided to draw longitudinal lines with the same path as the drift, to make progress less difficult. However, on two occasions there were serious snags with the rocks at the bottom of the umbilical cord that connects the underwater robot with the ship, and in one of them it took almost an hour to free it.

High risk of losing the robot

According to the experts, it is a “critical area” to be able to operate with the underwater vehicle due to the “very high risk” of loss. In addition to the inconvenience that it represents for the normal development of the robot, the orography of these funds causes the search to be much less effective, due to the number of cracks and ravines and the enormous depth, sometimes hundreds of meters, which does not allow at all. to the investigators to ensure that in those areas that had been tracked, there was not the body of Tomás or any object from the boat. As the experts explain, the tasks are very complicated, basically when going from working in two dimensions and on a defined surface, to doing it in three dimensions and in very complex conditions due to bathymetry.

In fact, he points out that once the first minutes have passed after the motor of the pleasure boat stops, which is considered a point where Gimeno could have jumped into the sea, in the rest of the drift there are the same probabilities as in any of their points, being this, in addition, very low. “Most likely,” say the technicians, is that he had jumped into the sea in the area where the mini oxygen bottles appeared and was subsequently swept away by the current.

Tags: end up, He decided, reasons, search, They are