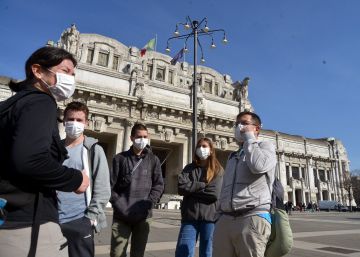 The quarantine of at least 50,000 people in northern Italy The coronavirus is a setback for the interests of a handful of Spanish companies with a large presence in that country. Specifically, blocking part of the population threatens consumption (Inditex) and the tourism sector, both hotel chains (NH Hoteles or Meliá) and IAG, which operates multiple flights to Italian cities through its airlines. Also to highway managers (Abertis) due to the possible drop in road traffic.

NH Hoteles has about 50 hotels in the country, of which half are concentrated in the north, where the vast majority of the nearly 300 infected have occurred. Specifically, the company has 12 hotels in Milan, the highest number among Italian cities, ahead even of Rome. In Turin it operates four hotels and in Venice, another four. In the Italian market, one of the largest tourist recipients, the chain has a turnover of 290 million euros, according to the company’s accounts for 2018. Another hotel company, Meliá, has six hotels deployed in Italy and half (3) is in the capital of Lombardy, the region with the highest number of positive cases.

The textile giant, Inditex, opened one of its largest stores in 2018 flagship in Milan, the city of fashion. Throughout the country it employs 8,600 people, a figure only exceeded in mainland China, France and Russia, according to the firm’s annual accounts. Amancio Ortega added 390 stores of the different brands of the group at January 31, 2019. The Catalan firm Mango, which has about twenty stores in Italy and a factory, billed 32.5 million euros in the country in 2018, according to Insight View data, compared to worldwide revenues of about 2,233 million euros. Its earnings amounted to 737,000 euros in the transalpine country.

The population confined in their homes may have another derivative: less displacements along the road network of northern Italy, a trend that goes against the Spanish road manager Abertis, which in 2018 entered 467.3 million euros in the country , according to Bloomberg. Abertis is present in Italy through the Italian group A4 Holding, which controls more than 85% and that It operates 235 kilometers of highways in the Veneto, the second region most affected by the epidemic. Its main assets are the A4 motorway, known as La Serenissima, one of the highest traffic density highways in the country, and the A31 (89 kilometers).

Sacyr increased its presence in Italy at the end of the year: the consortium made up of the Spanish group (49%) and its Italian partner Fininc (51%) was awarded the A3 highway improvement and operation contract (in the south-central part of the country) and took it from Atlantia. In the area most affected by the outbreak, Sacyr builds, again with Finic, the Pedemontana-Veneta payment road, which runs along 95 kilometers to the northeast and which will require an investment of about 2.5 billion euros. Of the group’s tax contribution, Italy is the second country in which it pays more taxes (11% of the total, only behind Spain, indicated in its 2018 accounts).

This decrease in road traffic could also affect Repsol as Italy is the fourth country in which it has more service stations (320), behind Spain, Peru and Portugal, and the fourth in Europe in which it employs more people (41). In front are Spain (17,496), Portugal (1,412) and Norway (254).

Airlines are also being harmed by isolation measures around the coronavirus focus. The IAG group flies to 18 Italian destinations through Iberia, British Airways, Vueling and Iberia Express, among which are destinations very affected by the coronavirus: Milan, Bergamo, Genoa, Venice and Bologna.

For its part, the telecommunications infrastructure company Cellnex operates in Italy through Galata, Towerco and CommsCon in “more than 12,000 locations”, the company says on its website. Among its clients are the main telecommunications operators in Italy. The insurance company Mapfre generated 474 million euros in consolidated revenue in 2018 (2% of all its revenues for that year), according to your annual report.

The Spanish multinational oil products Deoleo has offices in Milan and Florence. Among its brands is Bertolli, a pioneer in the export of oil to the United States, whose production plant is located in Inveruno (province of Milan). In recent years, Italy, once a great producer of liquid gold, has become an importer and its main source of supply is Spain, according to data from its 2017-2018 report.

The large electricity companies, EDPR and Capital Energy, awarded in the ‘mega-auction’ of renewables

This is the extension of the ERTE, the aid for the self-employed and the rents approved by the Government

The IMF cuts its growth forecast for Spain to 5.9% compared to the 9.8% still expected by the Government