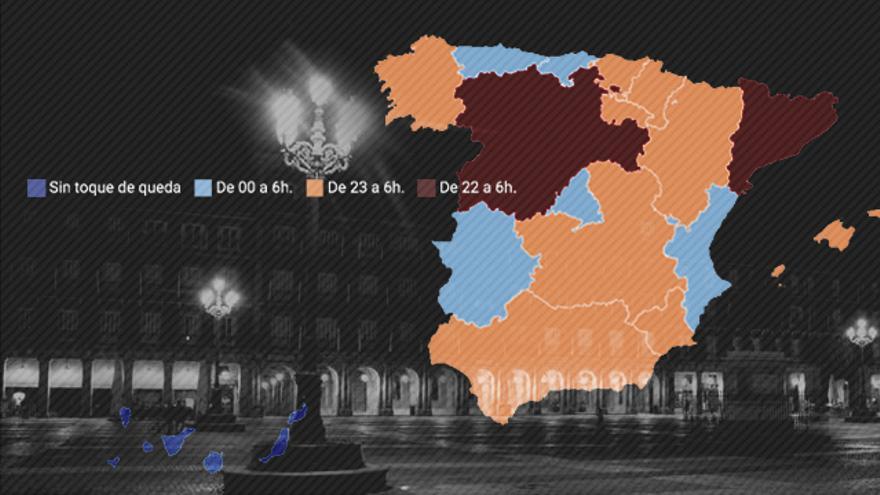 Spain is since this Sunday in alarm state. It is a legal framework that allows communities to establish drastic measures to stop the escalation of coronavirus infections with legal certainty. Decisions on what restrictions to implement will be in the hands of the autonomous governments, but there is one mandatory for all (except the Canary Islands) that has given much to talk about in the last week: the curfew. In practice, it is a nightly home confinement, different from that of March, which was total. In recent hours, the communities have been announcing in which time slots it will be implemented in their territory, although some of them had already given the green light to this measure days ago.

The obligation has been in force since this Sunday, so in the communities that have not yet announced the schedule, the threshold generally established by the Government governs: from 11:00 p.m. to 6:00 a.m. But the decree of the state of alarm allows each territory to adapt the schedule and gives them a margin of one hour ahead and another one behind: the communities can choose to start the restriction between 22:00 and 00:00 and end between 5:00 and 7:00. . The limitation is, literally, the prohibition of "the freedom of movement of persons" and in principle it will be in force for at least 15 days. As of November 9, each community will be able to decide whether to maintain it or not.

Navarra has been the last community this Monday to announce its time slot and has decided to keep it between 11pm and 6am. Already last week, the government of María Chivite threatened to include the measure in a regional order, but in the end ruled it out due to its legal complexity. The provincial community has just announcedFurthermore, the prohibition of meetings between people who are not living together is one of those that are closed perimeter, that is, no one can leave or enter without just cause - another of the possibilities to which the alarm state enables - and maintains bars and restaurants closed.

In this same hourly threshold proposed by the state of alarm decree, published in the BOE this Sunday, are right now most of the autonomous communities, specifically nine. However, some have yet to be decided. Those that have done so are Castilla-La Mancha, the Balearic Islands, La Rioja, Aragón and Murcia. For their part, Galicia, Andalusia and the Basque Country have not yet announced what they will do, so that in these territories today there is also a ban on driving between 11 p.m. and 6 a.m.

On the other hand, there are communities that have decided to advance the time of the restriction to 10 pm. This is the case of Catalonia, which also keeps bars and restaurants closed, except for picking up or ordering food at home, and Castilla y León. The Minister of Health of the latter has signed up this monday that it is a "very prudent" time to limit activity and has warned that the perimeter confinement of the community is not ruled out depending on how the contagion curve evolves, and even the home if the rise in cases is not stops.

Finally, the communities that have chosen to impose a curfew to the limit of what is allowed by the Pedro Sánchez Government, that is, until midnight (00.00 hours) are Asturias, Cantabria, Extremadura, the Valencian Community and the Community of Madrid . The latter decided last Friday to approve the measure and thus extend one more hour the opening of bars and restaurants Because until last Saturday the state of alarm decreed by the Executive in the community after the political clash between both administrations was in force and the hotel industry closed hours at 11pm. The Executive of Isabel Díaz-Ayuso has announced this Monday that it is studying closing the community to avoid departures during the next bridge of all saints. For their part, Asturias and La Rioja have decided to do it from this Wednesday.

The text of the state of alarm that the Executive plans to extend until the month of May, establishes some exceptions to the curfew. This implies that it will be allowed to circulate at night if it is to acquire medicines and essential goods, go to the doctor, work, care for the elderly, minors or vulnerable or to comply with legal or institutional obligations, among others. The decree justifies the extent to which the night environment is one of the most conducive "risk encounters" and in which security measures are most relaxed, therefore it is considered "a proportionate measure with a potential positive impact on the environment. control of transmission, by avoiding risky contact situations linked to social encounters ".