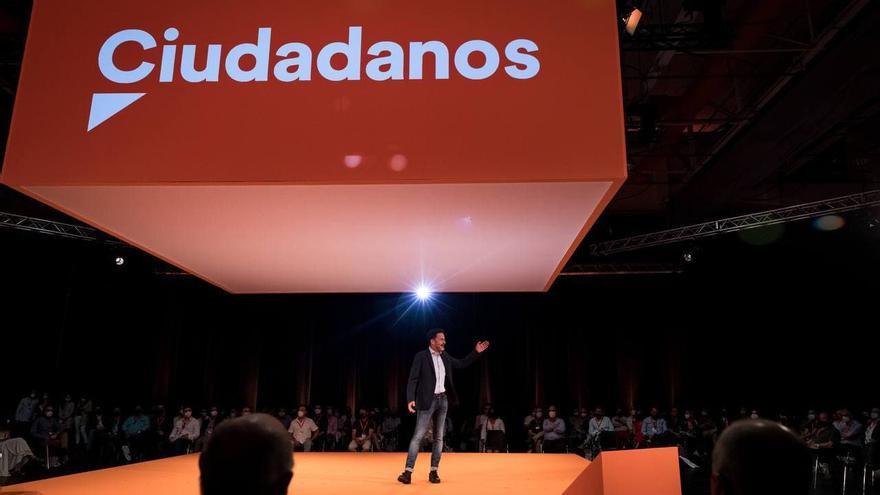 Ciudadanos has dedicated its first day of the Political Convention, which Inés Arrimadas will close tomorrow Sunday, to insisting hard on its “liberal” character and the need for its existence to confront “bipartisanship”, “independence” and “the populism “in the future. The deputy secretary general and spokesman for the party, Edmundo Bal, who has served as master of ceremonies, has made an effort to make it clear, both in his first intervention before the conclave attendees and later in an appearance before journalists, that “he is not going to to have merger with the PP “. “We are going to maintain our party with independence and autonomy,” he stressed, because his formation defends, as he has said, “principles that only fit Citizens”, “they are not in the PP, which is the conservative party.” For this reason, he reiterated that “it is important to preserve our liberal and modern space.” Furthermore, Bal is convinced that when this conclave ends they will leave there “rearmed”: “We are necessary, the people have faith in us and we will go forward to carry the banner of liberalism both in Spain and in Europe.”

The leaders of Ciudadanos have had, among others, the enthusiastic support of the director of El Español, Pedro J. Ramirez, who has been the protagonist of the presentation “The necessary center: the Liberal value”, and that in his speech he recalled to the former president of the Government and leader of the UCD and the CDS, Adolfo Suárez, as the architect of the first “center” and “liberal” party of our democracy. The journalists have made a parallel with that space that Citizens have tried to occupy since its birth. “It is impossible to be liberal without being progressive. Do not give up, do not lose heart,” he encouraged them. “Those who give you up for dead will see you reborn as a Phoenix”, predicted Pedro J., who received close applause from those attending that presentation, moderated by the deputy mayor of Madrid, Begoña Villacís. The mayor has also bet that Ciudadanos continue to be an “independent party”, different from the PP, something that in her opinion is “more than evident”, since she believes that in its formation the majority position is contrary to a merger with those of Casado .

Among the guests at the event, held at the Palacete del Duque de Pastrana, in Madrid, also highlighted Dacian Ciolos, former Prime Minister of Romania and leader of Renew Europe, the liberal group in the European Parliament of which the party is a part, which has participated in the presentation on the need to Renew Europe. The debate has been moderated on this occasion by Luis Garicano and Arrimadas herself has intervened, who has recognized “errors” in these months that she has led the formation. The main one, the fact of “not having known how to explain well the successes” achieved by the leaders of his party in the coalition governments, which, as in Madrid, ended up being blown up. But she has been convinced that in the end the people of Madrid and the citizens will realize the benefits of her management when time passes and the absence of her party in the new government is noticed. The party leader has remarked, however, that they were “in the Citizens’ convention and not in that of other parties.” “There is nothing wrong with being a conservative but there is nothing liberal being a conservative,” he stressed, while remarking that Ciudadanos is a party “clean of corruption.”

Bal began his welcoming speech with words of support and solidarity with the Cuban people and their protests against the government. Miguel Diaz-Canel, greeting a group of guests, natives of the island, who were present at the event, “who have told me things that made my hair stand on end,” said the party spokesman. The number two of Arrimadas it has vindicated the survival of the formation in the face of bipartisanship or populism ”and has rejected those who attack them,“ belittle and vilify them ”. “Today this Convention starts with a success.” “It has become clear that being a liberal means defending others and respecting others; not believing in the labels of good and bad and respecting democracy,” insisted the deputy general, who also added that they are not “a sectarian party. “, but a training that is based” on common sense and realism “so its survival is assured.

In his speech to the press, the party’s spokesman has defended himself against those who accuse them of agreeing with Vox in those autonomies in which they maintain coalition governments, such as in Andalusia. “We have not signed a single government agreement with Vox, only with the PP and in some places with the PSOE,” he assured. “Of what the other parties do, they will have to answer … you have to ask them,” he added, referring to the PP of Juan Manuel Moreno Bonilla, who had to negotiate and sign with the Abascal formation his own document so that support his investiture. Bal has boasted that precisely in Andalusia, thanks to Ciudadanos, “the corrupt have been removed from the Junta [PSOE] after almost 40 years ruling. I’m not going to get involved in what the other parties do, “he has settled.

Among his purposes, the number two of Arrimadas has advanced that “the plan” of the party of the party for the future to correct these assumed errors is to “do better”, better communicating what they are doing. “But what we are never going to do for people to see is to break governments, or to be disloyal. We are not going to do those things that others do in order to appear in the photo or to put on a medal.” “We will maintain the sane of the Government with loyalty,” he has settled, in a veiled attack on Isabel Díaz Ayuso.