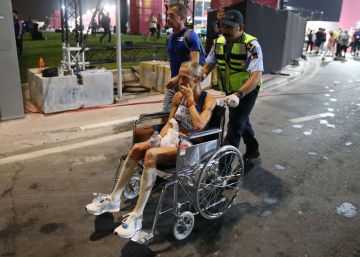 Turned off the music and finished the verbena, the only interest, and concern, of Sebastian Coe was for someone with voice and responsibility to assure the world that what had happened the previous three hours in the furnace of the Doha waterfront by the dark sea - a marathon to wipe out all marathons and, almost, the health of marathoners — it had been neither exceptional nor worrying. Although only 40 women finished the 42 kilometers and 195 meters slower than the World Cups. Kenyan Ruth Chepngetich won (2h 32m 43s) in a hell of 32.7 degrees and 73% humidity.

The image of normality of Coe did not stop because someone with sense reminded the president of the IAAF, and responsible for the irresponsibility of a world marathon being played in limit conditions, which can not be said to be normal a test that ends with the worst time of history (some marks, some passing times close to and exceeding four kilometers, which make any popular broker think that the best in the world in the background are not much better than them), with a percentage of withdrawals from the 41%, with two of them in the hospital and a continuous stream of fainting in the race. Indeed, they told him, there have been no problems, there have been no deaths, but perhaps it was because the medical services have done very well, because Chaos has been touched.

The American College of Sports Medicine sets 28 WBGT (Wet Bulb Globe Temperature, temperature combined with humidity) the limit index to prohibit continuous exercise, a cap that would have prevented the organization of the World Cup road tests in Doha. The IAAF medical officers adopted the 30.9 cap, a temperature they only adopt in Japan. Officially, the women's marathon on Friday at midnight was played with a WBGT index of 29.5 (air temperature, 32.7 degrees; humidity, 73.3%). "Would it have been more shameful for the IAAF to suspend it than to dispute it under these conditions?" Asked a member of the health team (16 doctors and more than 40 auxiliaries) at the end of the competition.

Neither Coe nor the IAAF communication leaders were discouraged, who in the media they control - the television production, their website - prevented a single questionable image from being seen. Half a day after the midnight marathon, the IAAF opened its website even with a photo of the easy and viral solidarity of the Guinea athlete helping the Aruba to finish 5,000m, the great story of the first day in his opinion, and a picture of Ruth Chepngetich, the 25-year-old Kenyan who won the test, crossing the finish line smiling, and some phrases: “I feel very good. I am happy and I thank God. The marathon conditions? They were not bad for me. ” In the chronicle they do not ask, however, for the reasons why Chepngetich won with 2h 32m 43s, a time 15 minutes slower than his best personal mark (2h 17m 8s), the third in history, achieved in January in neighboring Dubai.

Nor does the chronicle of the statements of the fifth classified echo, the Belarusian athlete Volha Mazuronak, who, lapidary, summed up her night: “Moisture kills. There is no air to breathe. I thought it wouldn't end. It has been disrespectful to athletes. A handful of leaders met and decided to bring the championships here, but they are sitting with air conditioning and surely they are now asleep. ”

Valls Marathon (Tarragona) Marta Galimany, who prepared in the warm wetlands of the Ebro Delta, was one of the 40 heroines that survived, encouraged by her partner and coach, Jordi Toda, from the drinks table: go slower , do not risk, that you are doing very well, do not take risks, that you die ... At the end of the day your happiness was greater because of your position (an unexpected 16th half that already opens the doors of Tokyo 2020) than the bad body left by 42,195 kilometers in the oven, and he recognized that perhaps he owes his position to extreme conditions, since he had prepared himself better to survive than many rivals with a better mark.

Only in the early afternoon, when he announced with a sigh of relief that conditions had improved and that they would develop as planned for the 50 kilometers march in the early hours of Sunday (29 WBGT index), the IAAF gave the first numbers of the previous night. “There was no serious heat stroke. Thirty athletes visited the medical center as a precaution. A small number remained under observation. And one was sent to the hospital, where he was later discharged. ”