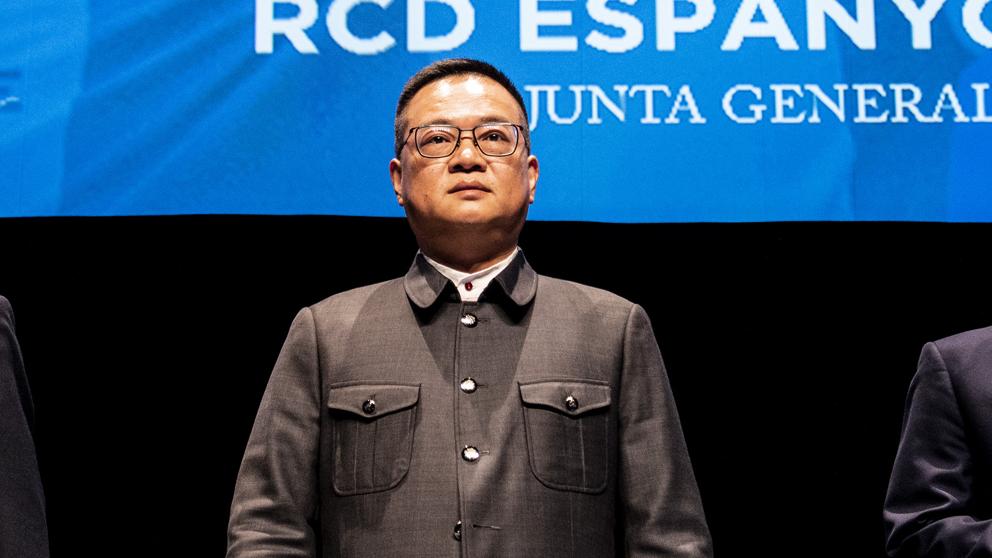 Shareholders and fans of Spanish they were waiting for the words of Chen Yansheng, owner and president of the club, for a long time. Just landed on Monday in Barcelona, attended the sports city Dani Jarque to meet with those in charge of professional football before the serious sporting situation that the club is going through.

Although his presence urged To send a message of tranquility to the blue and white environment, Chen had already scheduled the trip for a long time to preside over the General Meeting of Shareholders held Tuesday at the Cornellà auditorium. The Chinese businessman was not addressing the parish parish in public since the last assembly. The sports situation was very different from the current one.

We will spare no effort in solving the situation ”


Chen started the speech for the positive. He mentioned the classification for the Europa League and he said he and the club dome were "very happy". He went on to say that "we are not in a good situation at the moment" and said that they are "busy solving" the crisis and that we will "spare no effort."

If something you wanted to make clear is that your project, even in this declining moment, continues. For this he used the Chinese proverb: "There is no money that can stop the riverbed." What did he mean by this? That they dedicate the “maximum effort to achieve sporting success”, for which they will need “the help and support of all the parakeets”, even if they are “sure that we will soon leave” below.

Among other things, he highlighted the "pride" he feels for seeing so many "youth of the quarry" in the first team and said they will continue with the "ambition" to "strengthen and attract talent" to grassroots football.

At the same time he made a brief introduction to the numbers and actions that the corporate general manager presented after him, Roger Guasch, and the chief financial officer, Joan Fitó, such as the ordinary 80 million and 10 from transactions by footballers, so it boasted “generate positive results for four consecutive years.” It also introduced the capital increase of 50 million, from the capitalization of debt with your company Scratch, which already announced on the Board last year.

I feel a strong responsibility on my shoulders ”


Another change that he stressed since his arrival is the one that Espanyol has “stopped selling out of necessity” and now does it “for convenience”. He also spoke of the "international projection of the club" to the sponsors, which will enable "to increase the income of the club."

Finally, he summarized the "position of Espanyol" as "much improved" when he became the majority shareholder of the club and tried to reassure fans by admitting to have "strong responsibility" on his shoulders. "I always trust that this club, because of its history, will get where it should be with the unity, work and effort of all," he settled. Then he raised his fist and muttered, bellowing a shout, "Visca l'Espanyol!"

Real Sociedad: Willian Jos stays out of the call to receive Mallorca

FC Barcelona: Setin: “We haven’t been good at all, we don’t like what we’ve seen today”

The Celtic, forced to win an Eibar that seeks to distance itself from the descent