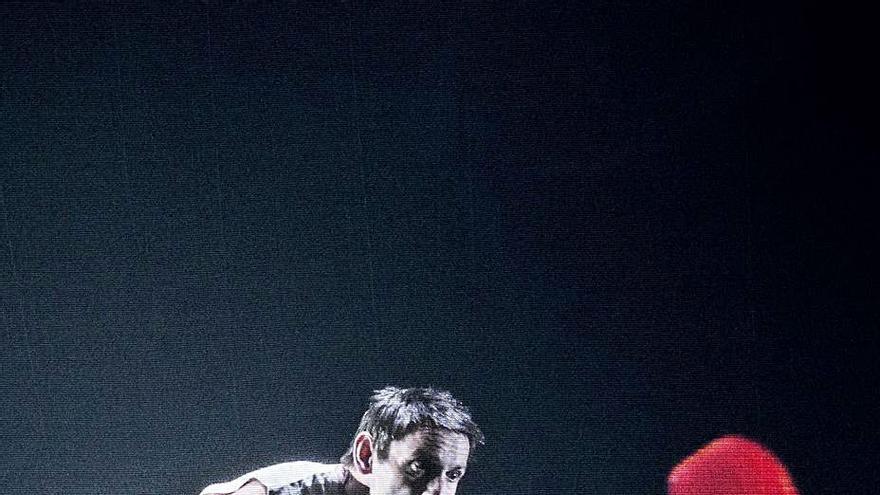 Every day a new fear is found, but this time we did not need to investigate, and it is difficult to stay out of this fear as well.

A multimedia proposal, with a soundtrack that he signs together with Raül Refree.

The show is very simple, I am alone on the stage, and more or less I am saying that I am afraid of this, that, the beyond, and all those fears that are listed and we are illustrating them well with ditties, little sketches theatrical or monologues. These are projections digitized by the Nueveojos studio on some paintings by Argentine painters, Mondongo [Juliana Lafitte y Manuel Mendanha], with three projectors and superimposed fabrics that allows you to be immersed in delirious landscapes from which characters, environments, music can come out, you can fly, get under water, …

The mirror of the ghosts of each one, as if it were a tendency to live in fear.

I think it’s a very unsocial show where no politician is named and all those things that people like so much, and where one reflects from privacy, about what is happening to me, and maybe 95 percent of the fears that are named, people have ever felt them and in some way.

How has the assembly worked in Spain?

Very good, we’ve been around for two years and I think it’s the show we’ve worked with the most and best. This year of break we thought to extend it one more year and we will do it another two. We have half Latin America and Spain pending, I am optimistic, I believe that at the end of spring we can continue.

Will we have to wait for vaccines to take away our fear?

It would be best to directly vaccinate everyone so that people will not have to be vaccinated.

The world has gone mad and lost, as it sings in Do you remember, the pandemic song that premiered in summer.

This song began to come out and perhaps it is the one that has given me the most satisfaction during this time, and a song that I really like, modesty aside. Humans are like that, we thought that if we all fought together we would win, and no.

In addition to the Fear 2.0 tour, the year leaves his second book, the series Bourbon Spain, and offers to sing a couple of songs via WhatsApp for 70 euros.

Well, let’s see, they have loaded half of my job, and the other half is doing things, which is what you end up teaching. In fact, you do a hundred things and teach ten. This is there is no fear that no harm will come, it is clear, and for now we are satisfied with this. I really like the WhatsApp concerts, I have even done four or five for people from the Canary Islands who have called me to sing a couple of songs, and the truth is that it is a very pleasant feeling, very cool. It’s the simplest thing in the world: if you want to listen to The Corner Bar or Fool Joaquín, you call me and say: “Hey, you sing to me …!”

Spain at war It is his second book, which was published in Spanish in October. A fiction, war comedy, in which Catalonia becomes independent, Spain declares war, and the Americans arrive to put order.

It gave a lot to imagine a squad of Americans exterminating anyone who has power in Spain. What the Americans do, who call it pacifying a country, exterminating the whole world, and being able to convey that feeling that they come and get charged to the entire Parliament, the judges, the Bernabeu box, as they do in any country that lends itself to be conquered. And I would not be surprised if the Catalans and Basques asked for independence, Spain would send the army.

The first season of Bourbon Spain, a series of eleven chapters on YouTube. Should the story be told in a different way?

All the documentaries or fictions that I have seen about the Bourbons I think they have caught the most boring part, because it is a delusion, the farce, the atrocities, the tragicomedy that can be getting into the life of Felipe V, Fernando VI or Fernando VII. And what surprises me is that no one has done it before me. Every stroke of character, every political act in each of the kings goes for a four-season comic Netflix series. For many atrocities I imagine, damn it, they steal them, because they have already done them. And in January we started with the second season, going into more detail about each king. I hope so. I also change my mind often.

Tags: Come on, evil, fear, there are