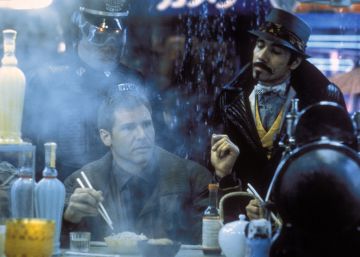 The era of AIDS It officially began on June 5, 1981, when the U.S. Center for Disease Control and Prevention reported that there were five cases of pneumonia from Pneumocystis carinii in Los Angeles. That of coronavirus It also has its starting date and place, November 17, 2019 in the Chinese city of Wuhan, and the effects on the human body, not necessarily fatal, are pneumonia and acute kidney failure. Between the current pandemic and HIV there are some differences and an intriguing cinematic connection. For starters, care in choosing a name. Covid-19 —acronym of coronavirus disease 2019– does not have any reference to a place, animal species or group of people, in line with international recommendations to avoid any stigmatization against any group, unlike what happened during the initial years of which it was called acquired immune deficiency syndrome (AIDS) or “pink plague” (so called because the infected showed pink spots on the body’s surface, Kaposi’s sarcoma), which was directly attributed to homosexuals on the West Coast and it was soon noted that they also Three other constellations of individuals suffered from it: Haitian immigrants, injection drug users, and blood transfusion recipients; altogether, four risk groups baptized as the Club de las Cuatro Haches (homosexuals, hemophiliacs, heroin addicts and Haitians).

Viruses, those undetermined aliens that we always color green, prescribe the existence of other worlds that are in this one. They invade us, replicate and become strong, like the HIV virions that already lived in the organism of the monkeys of central and western Africa for a century and that were silently passing to humans until they found their niche in the body of a constellation individual ax, in the same way that the dead man has now fallen to the pangolin, which, according to official epidemiology, is recognized a 90% chance of being the mother ship of the famous Covid-19 that is baffling and paralyzing the entire world .

The memory of the image of Harrison Ford in Blade Runner eating at Howie Lee’s White Dragon Noodle Bar in Los Angeles in November 2019 brings us to the mysterious connection between film fiction and the specific moment in which the unexpected passenger bursts into an atmospheric setting, any market, Chinese to It could be, in Wuhan, where the first infected by Covid was found, on November 17 last. The reminiscence of another parallel reality emerges from four decades ago: spring of 1981, in the down town from the city of Los Angeles, where Ridley Scott is directing his film about the future, the last one, perhaps, shot in analog format, during the same weeks in which the cases of individual 0 and the following four patients with AIDS were detected.

The dystopia of that future that we have already passed seems an invitation to read the essay Queer Utopia, by José Esteban Muñoz, who has just published in Spanish Caja Negra (the first edition in English is from 2009). The Cuban-New York essayist (1967-2013), student of the theoretical queer Eve Kosofsky Sedgwick, uses the metaphorical formulas of “what is not yet here”, “what is no longer conscious”, “the future that looms on the horizon” to claim the political idealism that underlies the culture of public sex of the yire (he flâneur sensual and sexual) that AIDS disease struck down. Muñoz criticizes the hetenormativity and economic pragmatism that the gay community has sucked through the conquest of the right to marriage, to join the Army or the adoption and formation of conventional families, and advocates the practice of cruising as a verb – “yirar utopia ”- in an exercise of recognition of that dream territory in the“ bad streets ”, fatigued by literature, cinema and revolutionary politics. Recover utopia as one who walks through a park in the dark, an almost abandoned pier or the wooded edge of a river, privileged scenes of the crossing of desires.

Faced with the “here and now” of the specific confinement (the one that millions of people now live in), Muñoz plays with the utopian displacements that he already claimed Ernst Bloch in his 1959 essay The Principle of Hope and it bets on “then there”, in reference to that moment and place that can be placed both in the future and in the past, but that communicates an exact moment that can change everything: “If the future was already insinuated in future, what the complete statement comes to illuminate is its presence in the footsteps of the past, or, to put it another way, the possibility that the future that we can bring about has been anticipated, or dreamed, in a past that continues to challenge us ”.

Can we use critical imagination in these moments of uncertainty and confinement, when collective intervention in the public sphere is not possible? “That imagination existed before the AIDS crisis, but then the LGBT groups They fought to include themselves in a system that they no longer wanted to alter, “denounces Muñoz. Today society is facing an economic crisis for which we have not yet seen the consequences and an increasingly invasive surveillance system of the State and economic powers. The privatization and moralization of dissident sexuality, its confinement to the couple, to the bedroom, to the bed, the state of siege on the streets, will make us a laboratory society for a new ethnography.

Without hope there is no room for anger or provocation. The spring days of 1981 were the beginning of the end of those damn illustrious and all that social scum that bothered in the bad streets, at the same time that a film announced the beginning of the era of copying and domestication of individuals. At the moment, what we see on our streets is not very different from those of Manhattan under the Administration of Giuliani, which revived old cabaret licensing laws and used them to close and harass certain bars. Even today, some keep the large signs that say, “There is no dancing in this bar, by order of the New York City Department of Consumer Affairs.”